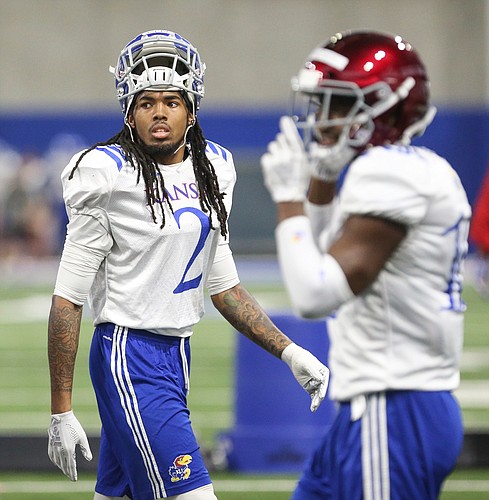 Kansas cornerback Corione Harris watches a drill from the sideline on Thursday, April 4, 2019 at the indoor practice facility. by Nick Krug

For a true freshman, playing cornerback in the Big 12 has the potential to be demoralizing.

A year ago, Corione Harris didn’t just line up at that position, where he knew tests and gut checks were coming his way, he started 11 games there for Kansas.

Harris’ freshman year obviously wasn’t perfect. But it didn’t chew him up and spit him out, either. If anything it ultimately emboldened the 6-foot-1, 180-pound corner from New Orleans, now that he’s headed into his sophomore season.

Defending the perimeter and deep down the field, often against larger, older and/or faster receivers, Harris produced as a freshman. He finished sixth on the team in total tackles in 2018. More than that, he forced a fumble, intercepted a pass, recorded a tackle for loss and broke up six passes.

None of that was enough to satisfy Harris. He said he spent the offseason looking to address some individual weaknesses that he encountered in his first year of college football.

“Really, I worked on my eye control, footwork, pretty much all of my game,” Harris shared.

In reviewing his freshman season, Harris also figured out how crucial all those challenges were, because they forced him to seek out ways to better understand all that comes with playing corner at the FBS level.

“For me, first coming in, not really knowing what to expect from the Big 12, even though it’s a passing league first, it’s kind of like I had to learn the ins and outs of it,” Harris explained.

Over the past year-plus, he said he picked up much more about strategies and cues, with the help of former defensive coordinator Clint Bowen (now KU's safeties coach) and fellow defensive backs Mike Lee and Bryce Torneden.

“That kind of helps me to understand what I’m looking at now. What to expect with certain teams, certain concepts,” Harris said. “We just break it down into details that make it a lot easier.”

Even if you’re good enough a year removed from high school to start at cornerback, you’re inevitably going to endure some struggles, as was the case at times for Harris. But his fellow defensive backs have shared over the past few months their opinion that Harris won’t look the same this coming season.

“He’s impressed me a lot. I tell him every day, ‘Just keep working. Keep getting better.’ We’ve got receivers that are pushing us to be great every day (in practices), and I feel like he’s really taking big steps maturity wise, physically wise and mentally. He’s been really working and I can tell,” Defense went on. “Coe knows that I never lie to him. And I tell him every day I can see him getting better.”

Older, wiser and more comfortable, Harris plans on playing an even larger factor in KU’s defense as a sophomore. And when it comes to his individual goals, well, the word substantial doesn’t even really do them justice.

“My goals and stuff, I really set outside of the world, so I won’t let myself down. To me, I want a thousand picks,” Harris said of his unique perspective. “If I set that dream… As long as they keep coming, I’ll never get complacent. You get complacent with small dreams. I have big goals.”

I hope that the depth chart is simply a motivational tool to get him fired up.

@Chris - It is amazing to see the difference between expectations and what happens with rosters. Coe. Charlot last year. Even Grimes and others. It would be so fascinating to be able to shadow a coach like Self or Miles and learn even a smidgen of what they see.