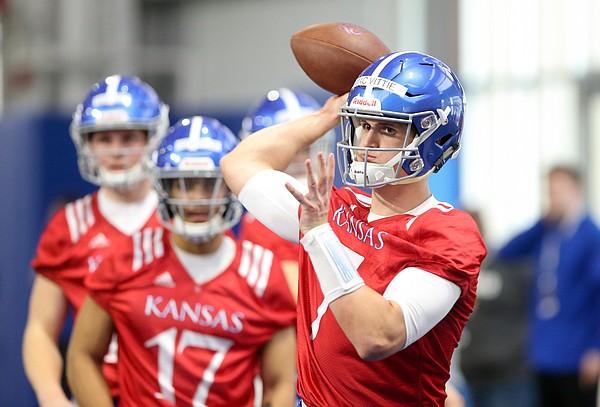 Kansas quarterback Thomas MacVittie pulls back to throw during football practice on Wednesday, March 6, 2019 within the new indoor practice facility. by Nick Krug

Don’t bring up the Kansas football team’s offseason conditioning sessions around Thomas MacVittie if you don’t want an honest response.

And if for some reason there happen to be children nearby when you do broach the subject with the junior quarterback, just tell the kids to earmuff it before MacVittie is reminded of those pre-sunrise sprints.

“(Expletive),” was MacVittie’s instant and visceral reaction when those workouts were mentioned.

Head coach Les Miles, his assistants and KU’s strength and conditioning staff made a point in February and early March, before the team’s spring football practices began, to push the players with intense conditioning work that doubled as a wake-up call — and an early one at that.

“It’s hard to kind of put into words, because there’s so many pieces that went into that puzzle,” MacVittie elaborated a few weeks back, when asked about how challenging that form of training was for the players. “First of all, waking up at 5 in the morning was a struggle, knowing the stuff that you were about to go through.”

The conditioning began promptly at 5:55 a.m. And even Miles admitted the workouts were not exactly designed to bring joy to the players’ lives.

“It tests you,” the KU football coach said. “It’s painful.”

However, as MacVittie would explain, the players understood how important it was to experience those mental and physical demands. A 6-foot-5, 215-pound QB from Cincinnati, Ohio, MacVittie said even though he’s no early riser, he appreciated the discipline instilled in the Jayhawks through the process.

To further their early a.m. misery, MacVittie said the coaches used what he called a “ding” system while watching the players’ runs. Any time a player failed to touch a certain line while sprinting back and forth on the turf at the indoor practice facility that player got dinged for coming up short.

“They time every rep that you have,” MacVittie added. “So if your rep is a couple of seconds (off), you’re not trying as hard, you’re dinged for that.”

According to Miles, the Jayhawks had to run “perfect sprints” at the very end of each morning workout, and they went through eight drills that were “very much like football games.”

The scrutiny didn’t end there, though. MacVittie said the whole coaching staff would watch video footage of the conditioning sessions “for two hours” after each one concluded. Each and every drill and every last Jayhawk was accounted for, thanks to the multiple cameras that captured every second of it from every feasible angle.

Even the players who were waiting in line had to be in “an athletic position,” with their wrists above their knees.

“And if you weren’t,” MacVittie said, “you would get dinged.”

As the Jayhawks endured it all, there was also a T-shirt system that measured their progress. MacVittie said everybody started off in gray KU football T-shirts. A player would receive a white one to wear if coaches deemed that particular Jayhawk was showing proper progress. What’s more, if players were what the QB described as “super-disciplined,” they got to wear a blue T-shirt.

What did that signify?

“You’re being a leader. You’re excelling in the things you need to do and you’re driving the team. Everybody was striving for the blues,” MacVittie shared. “If you got one ding you couldn’t get a blue shirt.”

Of course, all of this also made it easier for the Jayhawks to transition to spring football practice mode, once that began on March 6.

“I think it shows to the team that the details matter,” MacVittie said of the idea he took away from those demanding drills and sprints. “The details are why you win in the fourth quarter or overtime. Details are important. They’re going to be a first down or a fumble. It’s that small. It’s that small, getting your wrists above your knees. It’s that small, touching the line.

“That’s going to win games, believe it or not,” MacVittie said, “just that discipline.”

I like it. The “details” matter. Every single one of them. It needs to be preached and practiced every single day, until it becomes normal, like breathing.....keep at it

Benton, if I were to compare and contrast, I'm guessing the previous staff had nothing of the sort? This sounds like something Coach Self would do...

The previous staff was too busy fighting over who would fly the drone to even care about conditioning.

Rather than guessing (making insinuations), you could go back through the archives to read the stories about the conditioning program of the previous staff. There were good articles about the work they were doing and improvements being made. That was a stark contrast to a video released of a conditioning session from the CW regime, which IMO was not impressive at all.

It will be interesting to see how this translates to the fall. Early returns (read recent article about the last scrimmage) are that it has not been effective yet. The coaches and players were still upset about the penalties in particular stalling O drives or derailing the D getting off the field. Too much of the same old same old. There were a few L's that could have been W's just by cleaning up the execution.

Love it -- especially since I'm not the one having to do them, LOL.

Looks like MacVittie has been named team leader and starting QB like the last staff did without proving it on the field.

I love it!!! Maybe they should employ a Bill Self kind of boot camp!!!

Brian: I certainly see that this could be a concern based on the 4-year butcher job done by the previous staff when it came to QB management. I’m giving Miles the benefit of the doubt in that he hasn’t actually announced anything, just made a reference that could be interpreted in many ways (motivating the others, for example). As with the other staffs, I give a wide berth at the start, and I think Miles has earned even more consideration because he is a proven pro and proven winner. Frankly, until we start playing games there really isn’t much to comment on. The new staff deserves a chance to show what they can do.