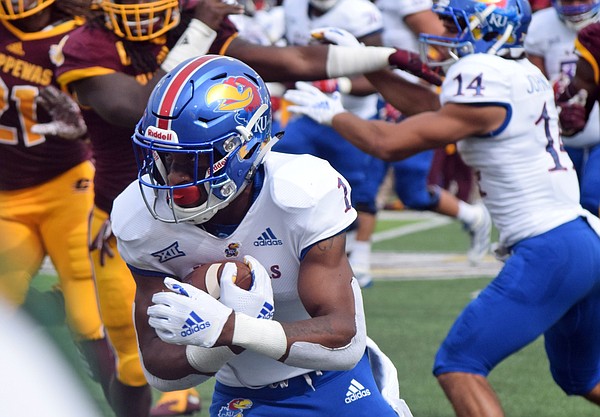 Officially, freshman Kansas football players — even redshirt freshmen in their second season with the program — aren’t allowed to be interviewed by the media.

So, unofficially (I guess?), here’s your first interview with KU freshman running back Pooka Williams.

ESPN’s Holly Rowe, in Lawrence to help KU student-athletes with some media training, posted a video of her back-and-forth with KU’s star freshman to Twitter on Tuesday night.

Sporting a black Chicago White Sox cap and a gray KU hooded sweatshirt, the Big 12’s leading rusher contentedly revealed a little about himself and his game to Rowe.

Anthony Williams Jr. by birth, he said his nickname “Pooka” came from his grandmother calling him that at a young age.

Already a game-changing talent for KU three games into his college career, Williams, a 5-foot-10, 170-pound four-star signee from Louisiana, leads the team with three touchdowns and 377 rushing yards. But he downplayed having a “special” start to his season.

“I’m just playing the course. My O-line’s giving me holes and that’s how it is,” Williams said, claiming he didn’t know where he gets his quickness from. “That’s a good question.”

Asked if he remembered when he first figured out he was fast, the former Hahnville High star replied while laughing, “I won a lot of races, so I wouldn’t really know.”

Still adapting to playing at the FBS level, Williams said “the crowd” is what he likes best about this stage.

“The coaches, too,” the running back quickly added. “I really found out all the steps about football. Not just playing football just to play football. I found all the steps out, the film room and all of that. In high school we didn’t do film and stuff like that.”

“The new juice is we’ve got to really restore Kansas,” Williams said. “And that’s what we practice for every day. Just trying to get wins now. We’ve got the talent on the team.”

We’ll be sure to ask Pooka Williams more about his upbringing, transition to college football and spectacular start to his KU career when he’s made available for interviews in the spring.

What the heck is Pooka Magic? Everywhere I went this week in Lawrence, KS folks are talking about it. I had to find out what is happening! @laapookaaa @KU_Football pic.twitter.com/DjIQt4wIzl

This is a Beaty rule, correct? Not an NCAA rule? And how common is it that other coaches do the same and won’t allow the media to talk with freshmen?

It's a Beaty rule. There are 130 FBS programs and my guess is probably 6 or 7 follow this rule, so maybe 5 percent. Beaty picked it up from Kevin Sumlin. He had been 100 percent consistent with it until now. I'm sure Kansas will make him available to us now and won't try some lame claim along the lines of "It was media training and we didn't know Holly would release it." Because if they claimed that they would look so bush league.

Holly is fantastic and I love her but if anyone got a chance to interview him it should have been one of you guys.

My guess is new hire Chris Freet probably not real happy that Kansas has a policy and then completely abandons it for member of national media.