5 stats that popped from KU football's loss at Baylor 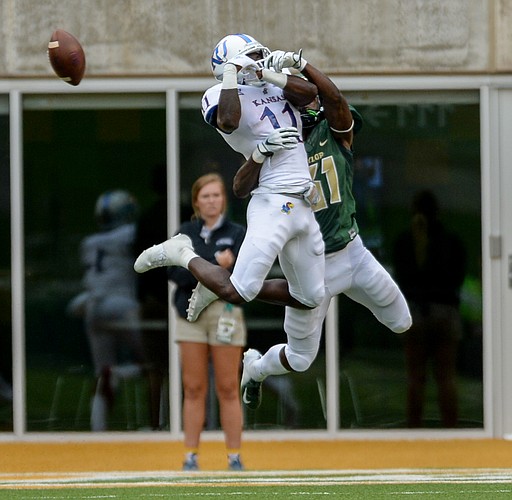 In a turnover-free Big 12 opener at Baylor on Saturday, the Kansas football team put together too few highlights on either side of the ball to keep up with the Bears in a 26-7 defeat.

One 90-yard scoring drive was the exception rather than the rule for KU’s offense, and the Jayhawks (2-2 overall, 0-1 conference) didn’t come close to crawling out of a 23-point first-half hole.

And though redshirt senior linebacker Joe Dineen delivered 13 total tackles, two tackles for loss and two quarterback hurries, the defense as a whole too often suffered breakdowns, and surrendered 447 yards, a season-high for a KU opponent.

Here are five statistics that kept Kansas from truly competing with Baylor.

Not enough support from passing game

The Bears (3-1, 1-0) knew the Jayhawks would like nothing more than to feature freshman running back Pooka Williams as much as possible, and the Bears game-planned accordingly.

But KU never forced BU to adjust its run-stopping defense with an effective passing attack.

Senior quarterback Peyton Bender completed 10 of his 17 throws, but a whopping seven of his completions picked up seven yards or fewer. Another completion — a touchdown pass to Jeremiah Booker — went for 10 yards.

So, between seven incompletions and eight completions of 10 or fewer yards, 15 of KU’s passing plays with Bender in the game netted a combined 40 yards.

Keep in mind: not all of that goes on Bender. The offensive line has to provide better pass protection and receivers have to find more opportunities to get open and bring in catchable passes in order for this offense to reach its ceiling.

Finding balance in the backfield 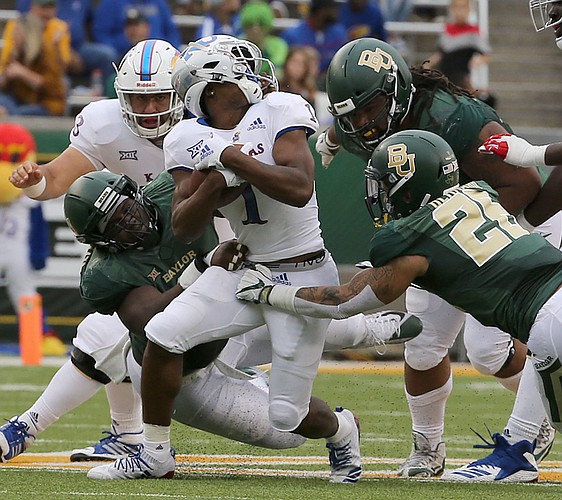 Kansas running back Pooka Williams Jr. (1) has his head turned on a penalty against a Baylor defender during the first half of an NCAA college football game, Saturday, Sept. 22, 2018, in Waco, Texas.

The Bears reminded the Jayhawks that even Pooka Williams can’t do everything.

While the talented freshman from Louisiana was able to bust a 72-yard rush that set up KU’s lone TD, eight of his 14 carries went for three yards or fewer.

Some of that is to be expected, especially with a freshman playing his first Big 12 game and a still jelling O-line taking on the best front it has seen so far this season.

For the benefit of the running game and offense overall, KU likely needs to find ways to incorporate Herbert and Dom Williams more, while also relying heavily on Pooka Williams. It’s difficult to pull off such balance, particularly if a defense is keying on your run game and presenting matchups that lead you to pass more. But it’s something KU’s coaches will have to figure out.

On 55 plays at Baylor, one of KU’s top three running backs carried the ball on 18 snaps (33 percent). 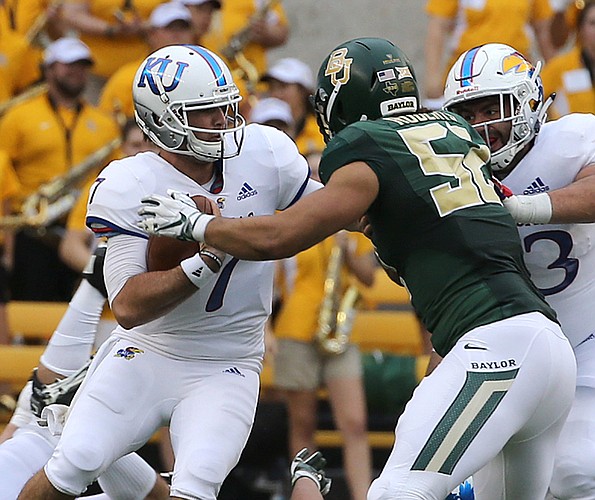 Outside of a touchdown pass from Bender to Booker in the third quarter, the Jayhawks mostly struggled to convert on third downs.

Overall, just four of KU’s 13 third-down plays went for a first down. On average, the visitors had 8.8 yards to go on their third downs, adding to their plight. They only averaged 3.4 yards gained on third downs.

On third-and-short (one to four yards), KU was fine, picking up two of three — Pooka Williams ran for one in the second quarter and backup QB Miles Kendrick converted on a carry in the third.

However, on third-and-longs (nine-plus yards), KU went two for six. Although the Jayhawks converted six of eight passes on third downs, they averaged just 1.3 yards per attempt and were also sacked three times.

Conversely, the Baylor offense’s 7-for-14 third-down success was fueled by gaining, on average, 9.4 yards on third down.

KU started every possession at least 75 yards from the end zone.

On average, thanks to Baylor’s kickoff and punt teams, the Jayhawks’ average starting field position was their own 17-yard line.

On KU’s 11 drives, one concluded with a score and seven possessions traveled fewer than 20 yards. Only four series ventured into Baylor territory.

Baylor’s offense, on 11 drives, had no three-and-outs.

Given the context of the game essentially being over and Baylor not having incentive to play all of its first-stringers, it’s difficult to know how Carter Stanley would have performed if he played earlier in the game.

Still, the redshirt junior at times looked both comfortable and effective, once he took the field with less than six minutes remaining at McLane Stadium.

A shoulder injury kept Kendrick from handling KU’s final two possessions. In his place Stanley completed four of his six passes for 37 yards and rushed three times for 27 yards (second-best total on the team).

On his first series, Stanley made two short completions to Kerr Johnson, but suffered a second-down sack. KU went three-and-out.

The final possession began in the last minute of the fourth quarter, and Stanley hit Evan Fairs for 20 yards and Booker for 10 yards through the air. He also took off for rushes of 18 and 15 yards. KU went 63 yards in six plays before time ran out.

There’s no word yet on the extent of Kendrick’s injury. But if he happens to miss some time, KU knows it has another QB it can use in Stanley.

And, let’s face it, even though Bender has started all four games it’s not as if anyone would consider his status a lock going forward. Should Stanley see more playing time in upcoming weeks and give the offense a spark, it wouldn’t be all that surprising to see him move up the depth chart.

We used NO tempo!

Carter Stanley is the only QB on this roster with a decent win on his resume, so why not?

And thus begins the revolving QB carousel. At the beginning of fall camp we had three QBs and neither of them could make any sort of clear separation which lead me to believe if you have three QBs you really have none. You can certainly point to many factors that led to the downfall of the Beaty era (I'm talking once he arrived not what was existing before he arrived) but his inability to find or develop a Big 12 level QB along with consistent turnover in his staff, IMO are the two biggest reasons why KU Football is in the mess it is in.

I wonder if there are other positions where we are rotating players inconsistently. Some I realize are by design, like a third and long, would shift the players on defense; however, I wonder if the QB situation is just the tip of the iceberg. I'm not an expert on what roles should be rotated and which ones seldom rotate.

We continue to rinse and repeat the past failed QB decisions. Let's see if anyone has heard this before. A highly touted quarterback that has failed at a previous big name D1 school comes to Kansas and fails. Jake Heaps ring a bell? Stanley is the only QB who I've seen on this roster that can consistently move the chains.