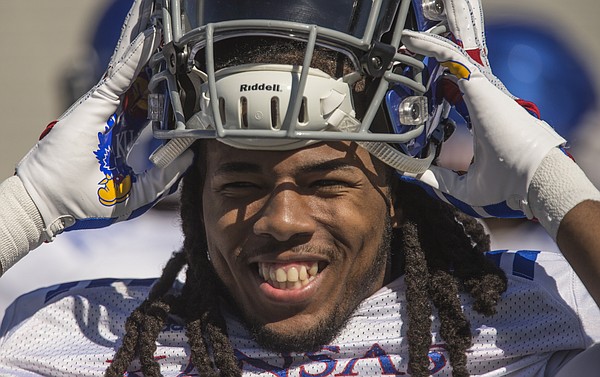 Kansas freshman cornerback Corione Harris smiles as he pulls on his helmet during practice on Monday, April 23, 2018. by Nick Krug

No one figured it would take Corione Harris long to break into the starting lineup at Kansas. Still, the freshman cornerback from New Orleans might have even flown past some of his highest expectations.

It only took Harris until the second game of his college football career to graduate from contributing reserve to a first series appearance.

On the same day that fellow four-star Louisianan Pooka Williams Jr. sprinted and juked to a spectacular debut at Central Michigan, Harris, a 6-foot-1, 180-pound corner, started, too. And while Harris, who played in spots off the bench the previous week, didn’t provide the same fireworks for the defense that Williams did for the offense, his teammates and coaches thought the young defender held up well.

“He handled it exactly like we thought he would. He didn't make any big deal about it. It was just very workmanlike,” KU coach David Beaty said.

“We felt he had earned that opportunity,” Beaty explained of the switch. “He had shown we could trust him in that position, that he had adapted to the scheme and the way that we were able to do things and that it really, ultimately, with him and all of them, it comes down to who we trust is going to be able to do it the best.”

Initially, it appeared Central Michigan (0-2) might try to test the true freshman often. On the Chippewas’ second play from scrimmage, quarterback Tony Poljan targeted Harris’ man, Brandon Childress. With Harris giving the receiver roughly a seven-yard cushion, CMU picked up 9 yards and a first down, as Harris got credit for a tackle, bringing Childress down out of bounds.

However, CMU spent the majority of the game either running or throwing nowhere near Harris. He finished with three total tackles (two solo) in a road win that improved KU to 1-1. According to analysis from Pro Football Focus, Harris played 49 snaps (on possessions that he sat, Elmore Hempstead Jr. replaced him) and received a grade of 62.6.

Though far from proven at the college level, Harris’ approach and ability has long made teammates think it’s only a matter of time before he starts playing to a level worthy of his high school hype.

Junior safety Bryce Torneden said Harris — KU team policy doesn’t allow freshmen to do media interviews — looked like a natural at times, as early as this past spring’s practices.

“It’s very apparent to see,” Torneden said. “It’s definitely going to be awesome to see him put his whole game together with his natural raw ability that he has and the coaching that we have here.”

According to Torneden, Harris’ ball skills likely are his biggest strength in the secondary.

“When that ball is in the air, he’s a go-getter,” the safety said of the corner. “He’s going to go up and get it.”

Although KU picked off four passes at CMU, Harris didn’t get an opportunity to show off that ability. His best chance to join the takeaway brigade came on the first play of the second half. Poljan didn’t pass to the freshman’s man, but Harris was one of a swarm of Jayhawks zeroing in on a fumble — even getting a hand on it — before Torneden secured it. Harris hopped up off the turf and was the first KU defender pointing in the other direction to indicate Shak Taylor’s forced fumble was recovered by the Jayhawks.

Taylor, who also returned an interception 55 yards for a touchdown while playing opposite Harris, said the freshman corner passed a potentially tough test, making his first career start on the road.

“He played his game, and did what he had to do,” Taylor said. “Of course, there are going to be little things you need to work on when you’re a true freshman coming in for your first start. But I felt like he played really well being in that position.”

One example of Harris simply carrying out his assignment came later in the third quarter. On 3rd and 21, he played far off receiver Jamil Sabbagh, making him an easy underneath target. But Harris and senior linebacker Keith Loneker Jr. easily stopped Sabbagh 10 yards shy of a 1st down.

“He could be real good when it gets to learn things he needs to learn. I think he does everything well: tackle, cover, catch,” Lee said. “He’s just a physical, smart guy. He’s fast. … I ain’t going to say he’s faster than me, but he’s fast.”

The defenders who have witnessed Harris’ growth since he arrived in Lawrence in January think his first career start and the lessons that accompanied it will only help his trajectory.

“Obviously, he’s an amazing player and an amazing athlete,” Torneden said. “I think he played great. He was very consistent throughout the game. I think the big thing about our defense is playing consistent. I think he did a great job of that. He did his job, he played his role and I’m expecting a lot out of him.”

"... the freshman cornerback from New Orleans might have even flew past ..."

Nice article, Benton (and I love the pic of Corione with his helmet off), but is it really too much to expect a professional writer to know how to use basic grammar??? (For those who don't know what I'm talking about, it should be "might have even FLOWN past ...."

Thanks for the note.

Is it really too much to expect a poster on a website's comment section to know how to use basic punctuation, when he's correcting other people? For those who don't know what I'm talking about, Len should've had a parenthesis on the end of his last sentence.

Point well taken, Lance, but I would argue that there's a big difference between an amateur like me and a pro.

Nice one, Lance! The mug of Harris looks like he is missing a grill, especially with those NOLA roots...standard equipment in the 504!