Les Miles left Louisiana, but his name remains influential in 'The Boot' 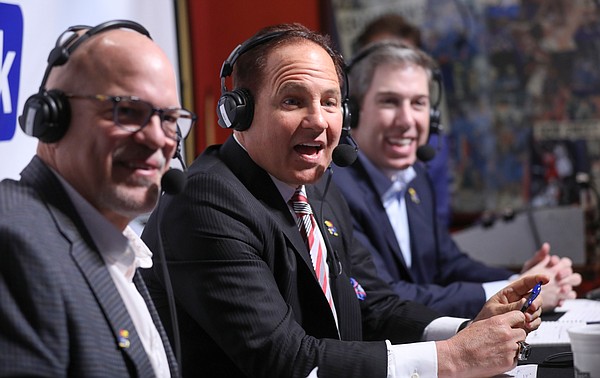 Newly-hired Kansas head football coach Les Miles shares the story of how he met his wife between radio broadcasters David Lawrence, left, and Brian Hanni, back right, during the "Hawk Talk" radio show on Sunday, Nov. 18, 2018, at Johnny's West in Lawrence. by Nick Krug

The Les Miles brand grew to the height of its powers in Louisiana.

It’s where Miles coached the football team at the state’s flagship university, LSU, from 2005 to 2016. And it’s a place that he continued to call home for the past two years, during his hiatus from the sidelines.

His accomplishments there — see: Miles’ 114-34 record in 11-plus seasons at LSU, including two SEC titles and a 2007 national championship — are what made his arrival at Kansas this week so buzzworthy on the national college football landscape.

The hope among the suddenly energized KU football fan base is that the coach’s ties to the state affectionally referred to as “The Boot” will reinforce a recruiting pipeline from Louisiana that the program already has in place.

Most of them relocated to Lawrence because of the connection they felt with KU’s third-year running backs coach, Tony Hull, a New Orleans native with immeasurable recruiting connections down south, in The Pelican State.

Since signing his five-year contract with KU, Miles has appeared open to the idea of retaining members of David Beaty’s current staff.

“When I took the job at both Oklahoma State and at LSU, I kept guys because I wanted to work with them and I wanted to see what their conversation would be about their room, the guys that they coached,” Miles said at his introductory press conference. “I wanted to see how the recruiting end was going.”

Miles plans to sit down and “interview” every current assistant, presumably early next week, after KU finishes its season.

Although Miles told the Journal-World he never directly crossed paths with Hull while at LSU, he definitely heard about the head coach at New Orleans’ Warren Easton High, where Hull’s reputation blossomed.

“I know Tony Hull — not necessarily so much him, but I know guys that know him and I did research on him,” Miles told the Journal-World. “He’s a very quality person.”

Hull, also currently KU’s associate head coach, was the lead recruiter for three of the team’s most heralded signings from the past few years: Williams, Harris and Lee.

According to Miles, he didn’t have any prior relationship with those talented Louisiana prospects when he was at LSU.

“No, I think that they got recruited when I was disposed,” Miles said. “But I can tell you that I watched those guys and they're quality men, and the corner, Corione? Yeah, he's, in my opinion, he's going to grow up to be a really good player.” 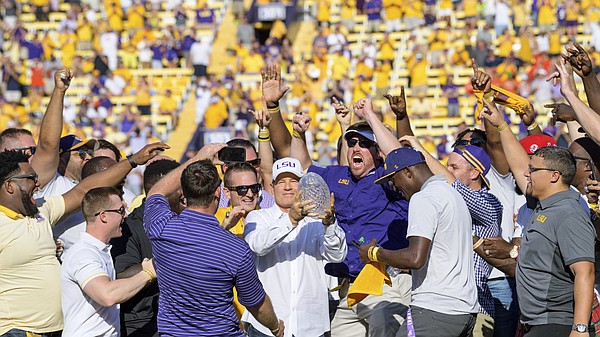 During the past several months, Miles repeatedly was spotted at high school games in Louisiana.

And Lee, who remains in touch with those he knows back in his home state, thinks KU’s coaching move created some excitement there, as well.

“Coach Miles, he’s caught a lot of Louisiana guys’ attention. And most of them are going to either commit here or they’ll be thinking about committing here just because Coach Les Miles got the head coaching job,” Lee said, speaking generally on the new KU coach’s name recognition in “The Boot.”

I really hope Coach Miles and company can work some last minute recruiting magic and sign 14 really solid players. Next year is going to be tough(er) without some solid additions and a base on which to build. What was the name of the four star quarterback that committed early and then decommitted? An excellent QB to build around for the future would be huge.

If an LA recruit would come to KU under Beaty, what can Miles pull from anywhere?

Beaty wasn't a coach with a name or reputation, Miles is that and then some.

I could see Hull being considered for the OC job. As someone else posted, you could bring back Reggie to handle RB's - and to help with recruiting. That would be a pretty impactful 1-2 punch.

For defense, how about Paul Rhoades? Familiar with the Big 12....and old DC.

Has anyone performed an accounting of the names of the 9 student athletes who blue-shirted to be on the roster this year but count towards the 2019 recruiting class of 25??

Likewise, what is the final redshirt roster for this year?

Just wonder what talent is in the pipeline.

Buck, Keegan did a pretty thorough story on scholarships about a month into the season. Don’t remember if it answered your question but it might.

Brett - I think the scholarship story TK did was back in March and is not available in the archives. Makes me wonder if there was some behind closed doors heat about it. That was before all the OL changes in particular. As I think about think about it there was/were article/s about all the new members of the OL though I don't recall any discussion at that time about the recruiting class and overall scholarship numbers.

IMO Coach Beaty did a great job at recruiting outside of the normal cycle which is why we have Adeniji and others. As TK discussed, the blue-shirt situation creates constraints that are far from obvious to those outside the program.

While most schools do have a dozen or two commitments, Matt was right that it could work out to Miles/our advantage. In looking through lists of top recruits in various important states for our recruiting, there are still lots of quality players available. We only need a dozen or so.

I was hoping that Charlot would have built on the success that Lee had in coming in and making an immediate impact. (Still hoping for a final season resurrection.) Pooka and Coe fortunately did that to a high degree. (Love that Les gave Coe a shout out when Pooka has been getting so much notoriety.) Wouldn't it be amazing to get an "Ed Oliver" anchor or 2 for the DL and/or elsewhere?

Reminds me of the article this week about Penny's recruiting and Wiseman's commitment.

The more burning question though is who are the OC&DC? Hoping it is not someone that is unproven at leading an offense or defense regardless of how successful they have been at other things.