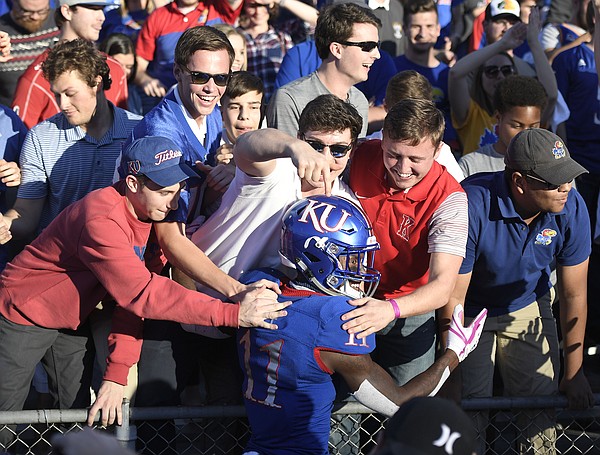 Kansas safety Mike Lee celebrated with fans after the win against TCU. by Mike Gunnoe

The junior from New Orleans loves to talk, and that makes him all the more affable in a postgame interview setting. Unless you’ve just asked Lee about a specific mistake he made on the field he’ll respond to most inquires with an honest answer and a smile.

Even though the Jayhawks lost at No. 6 Oklahoma, 55-40, Saturday night at Gaylord Family-Oklahoma Memorial Stadium, Lee’s mood perked in the interview area near KU’s locker room because he got to spend a chunk of it discussing the exploits of fellow Louisianan Pooka Williams.

“That guy is tough. I ain’t even gonna lie to you,” Lee said after Williams, KU’s true freshman running back, rushed for 252 yards and two touchdowns, averaged 16.8 yards per carry and even threw a TD pass to Jeremiah Booker.

Naturally, I thought Lee might have an opinion on another prominent man with Louisiana ties. So I asked him what he thought of the growing speculation that Les Miles will become KU’s next head coach.

With contract negotiations between KU and the former LSU head coach reportedly in the final stages as of Friday, speculation only increased Saturday, with the help of Miles’ pal, Tim Brando, who was on the call for FOX’s OU-KU broadcast.

Nothing is official. But it sure seems as if Miles could soon be in charge of KU football. Is that good news?

As much as he wanted to play it off, and surely had been instructed not to talk about the Miles-to-KU smoke, Lee’s face beamed during his answers. Read into his body language what you will.

As for Joe Dineen, KU’s redshirt senior hometown linebacker, who grew up watching winning football in Memorial Stadium, when Mark Mangino ran the program? Even though Dineen won’t ever play for the Jayhawks’ next head coach, you know how this all plays out really means something to him.

What does Dineen make of the Miles rumors and reports?

He all but physically bit his lip.

Senior quarterback Peyton Bender took a similar stance when I asked what he thought about all the Miles chatter.

“I’m not really concerned about that right now. Just focused on next week versus Texas and finishing out this season strong,” Bender said in his typically serious interview tone.

I told him it was a well rehearsed answer. The laid back QB flashed a Mike Lee-level grin.

The Jayhawks are doing their best to tune out all the Les Miles buzz. But they’re only human. They know about it. And because they care about the KU football program they’re excited about it, too. Even if they’re not supposed to say so. Yet.

The final score wasn't a blowout.

I know Beaty needed to be replaced, and I argued for it. No question. Miles is the guy to take us to the next level. But in a media frenzy where the high-intensity spotlight is shining on him, standing off out of the light is a man of integrity by the name of David Beaty for whom I will be grateful because he DID improve the standing of KU football, albeit modestly and although the improvement has really only shown in his final year. Still, a couple of seasons from now I think we'll look back on Beaty more favorably, and at that point concensus will be that his real contribution was positioning Kansas for later success (even though the Win-Loss column won't show it because the record is terrible). David to me is a guy who laid the groundwork upon which his successor will build, while observable metrics eluded the man himself. Even the relative improvement in his final year had to be pre-staged...by Beaty. Bottom line for me? Beaty is a guy who would always be improving, without ever actually achieving "success".

But Beaty has closed the gap some, y'all.

The blowout losses have dwindled (only 2 games with losses greater than 21 points). Kansas is scoring an average of 24.5 points to its opponents' 30.5 points, an average difference of only 6 points. That's only a one-touchdown differential per game, ON AVERAGE! In the classroom the academic ranking of the football team has improved.

Fair-minded individuals might therefore see Zenger's tenure at Kansas in the same light. Preparatory in nearly every sense. In the Beaty coaching hire (which as above was precursory itself), the pathway for a new stadium (including tearing out the track, the building of Rock Chalk Park, and the beginning of plans for stadium renovations), facilities for the team are improving, and even in some sense preparing the fans for better days ahead in football by introducing them to Rock (Chalk) Bottom, such that we have no other place to go but positive. I have this very strong feeling that as a program we have been a slingshot stretched as far back as we can go, and when this program finally gets released we're going to rocket forward. Every success will be magnified because we are Kansas. Observable progress will produce disproportionate gains in recruiting, booster contributions, and band-wagoning fan support (Bryce Landon might even try to show his face in the football comments with positive stuff). But I digress. Zenger, like Beaty, did not actually produce results during his own time at Kansas, but his presence here may prove redemptive over the course of time.

It'll be on Miles now to take us over the goal line.

Post Script: Can we please not forget the contribution of Clint Bowen, who many positive things can be said about? People blame some of his defenses, but at Kansas we only get one or two defensive standouts a year because of who we are. Bowen, who will likely be lost in the shuffle of regime change, did many positive things with what he had been given.

I have to agree. David had not built a reputation before inheriting the second Charlie Weis disaster. It's hard to recruit a kid without that reputation because they have choices. I for one wanted to see Beaty succeed. I don't feel bad because that is the way of college football and he basically won the lottery financially. But I do believe that David Beaty made this a better football program.

Let's try to be as accurate as possible. If Beaty had hired a solid OL and OC from the beginning, he would most likely have succeeded. Would probably have won 10 games over the last two years. The offense has improved in its efficiency over the time since Meacham has been gone. It was his inexperience that caught up with him, but the AD knew he was inexperienced when he was hired. If Long had hired him, he would have made it. So many ifs. Wishing him great success in the future.

Beaty will be an effective leader in the fast-food industry.

Would that make him your boss?

Classic. Good for you, Dale.

Kids showing proper respect for their current head coach by not talking about who may or may not be replacing him. That's how things are done. Good for them.

Absolutely agree. Even if the kids are excited at the prospect of playing for Les Miles, they have too much respect and love for David Beaty to let that show at this point. David Beaty has taken all this with a lot of class and his players are holding with his example. Good for them.

Right on guys. Love all around.