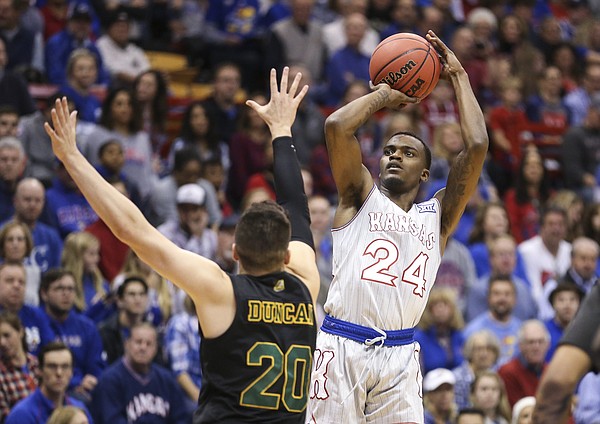 Kansas guard Lagerald Vick (24) puts up a three over Vermont guard Ernie Duncan (20) during the first half, Monday, Nov. 12, 2018 at Allen Fieldhouse. by Nick Krug

For most of the Jayhawks’ home opener, only two players found ways to assert themselves on offense. And, really, it was more The Lagerald Vick Show, with Udoka Azubuike co-starring than a case of equal billing.

He went on to nail all eight of his attempts from behind the arc and lead Kansas with a career-best 32 points. You could tell he was cooking early, when he buried his fourth with a little one-on-one crossover and pull-up on the left wing after a half-court set produced nothing better.

The only other approach working for KU (to varying degrees of success) was force-feeding Azubuike inside, usually with entry passes over the top, and letting the 7-footer power through defenders for dunks, layups and shots near the rim. The massive junior hit 10 of 17 from the floor for 23 points and brought in 11 rebounds

Two first-half fouls meant Dedric Lawson only played seven minutes before the break and his slow start and off night — 0 points, seven rebounds — served as a reminder of how vital the junior forward will be for KU’s offense.

With little offensive support for Vick and Azubuike, KU couldn’t put away Vermont (1-1) until the final minutes.

In the opening minutes, KU ran into trouble contesting Ernie Duncan and Stef Smith (both 2-for-2) from beyond the arc, leading to a 14-8 deficit before the first media timeout.

Vermont improved its lead to 23-17 near the midway mark of the first half on Smith’s third 3-pointer and led by as many as eight.

Azubuike, with regularity in the first half, struggled to recover when involved in ball screens, leading to quality looks both inside and out for the Catamounts.

KU eventually adjusted and/or settled in enough to keep Vermont from giving the Jayhawks a real scare, though. The Catamounts shot 41 percent form the floor and didn’t knock in enough 3-pointers (9 of 26) to set up a potential upset.

Outside of Azubuike’s double-double and some rebounds from Dedric Lawson, the bigs weren’t effective and in some cases, were just not playable, given Vermont’s reliance on a smaller lineup.

Freshman Quentin Grimes, with a steady floor game and 10 assists to go with his 10 points, gave Vick a little help. But Devon Dotson (seven points, six rebounds) wasn’t quite as effective.

Sophomore guards Charlie Moore (seven points, two assists in 21 minutes) and Marcus Garrett (four points, five rebounds and three assists in 26 minutes) were the only substitutes Bill Self trusted on this night.

High-low with great 3pt shooter is a lethal combination. Great performance from Dok & Vick. But we need to see more and more pull-up jumpers from this team. Grimes, Moore, Dotson should be given green light every game. That'll be icing on the cake. Winning against Vermont is not easy. They're well coached team. A great win by KU.

Hey, Benton, Mitch Lightfoot came off the bench, too!

Pull up jumpers are the least efficient shots of the game. They are dying for a good reason.