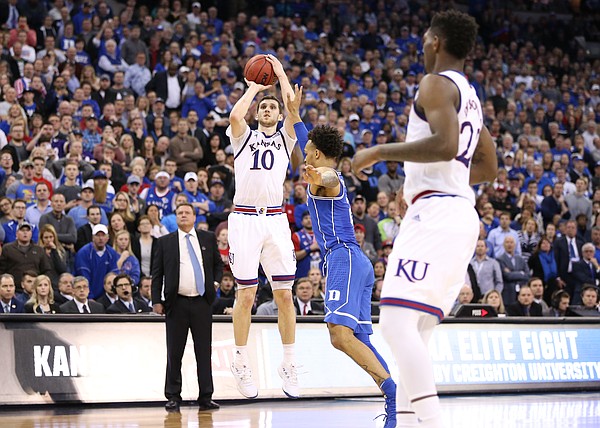 If you call yourself a shooter, there’s no reason to aim for average. You might as well go ahead and model yourself after one of the best.

That’s the approach four-year Kansas marksman Svi Mykhailiuk carries with him as he prepares for the NBA Draft.

This past week at the league’s combine for potential incoming rookies, Mykhailiuk, of course, showed off his 3-point precision. But the 20-year-old from Ukraine also made it clear he’s holding himself to a high standard while attempting to prove himself worthy of some team’s draft pick.

Mykhailiuk’s eyes lit up during a media interview at the combine when asked what part of his game translates best to the NBA level.

“Definitely shooting,” KU’s all-time leader for 3-point makes in a season (115) replied. “In the NBA everybody needs shooting. Everybody needs to stretch the floor. And everybody needs a guy who can create. So I think I’m one of them guys.”

"Dribbling, penetration, shooting, passing. Trying to show everything here in some games... In the NBA, everyone needs shooting." - Sviatoslav Mykahailiuk (Kansas) on what he improved on his senior year #BuzzCity pic.twitter.com/zHXia6Dr3l

At this juncture at least, Mykhailiuk isn’t considered a lock to hear his name called over the course of the two-round draft on June 21, in Brooklyn. ESPN’s mock draft lists him at No. 51, Sports Illustrated slots the 6-foot-7 shooter as the 60th and final pick of the draft and The Ringer projects him as undrafted.

Undaunted, Mykhailiuk didn’t think twice when asked whether he tries to model his game after any current NBA players.

“Definitely. I watch a lot of Klay Thompson,” Mykhailiuk said of the Golden State shooting guard, already a a four-time all-star. “I think we’re similar. We have the same height. And I think I can play at that level.” 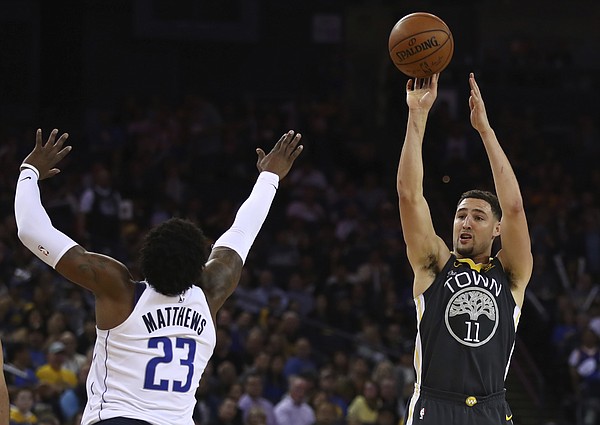 Since the Warriors made Thompson their late-lottery selection (11th overall) in 2011, the 6-7 guard from Washington State has drilled 1,557 3-pointers, hitting 42.2% of his attempts over the course of seven regular seasons. Thompson already ranks 24th all-time in career NBA 3-pointers made and has finished in the top 10 in 3-point percentage in five different seasons.

So Mykhailiuk wasn’t fooling around when he chose a 3-point shooting role model.

No one expects the Jayhawks’ most recent long-range specialist to go down as one of the NBA’s all-time sharpshooters, which is the trajectory for Thompson. Still, it’s worth noting they experienced similar success at the college level.

Thompson — who turned 21 in February of his final collegiate season — shot 39.8% from 3-point range as a junior before leaving WSU early to enter the draft. That’s the same percentage Mykhailiuk — who will turn 21 in June — put up his junior season, before nailing 44.4% from beyond the arc as a senior.

Obviously Svi’s shooting spirit animal had much more to offer as a prospect in 2011. The son of former NBA player Mychal Thompson, Klay averaged 21.6 points as a WSU junior and attacked his way to the free-throw line for 5.4 attempts a game. Mykhailiuk, as a senior, averaged 14.6 points and attempted 1.4 free throws while playing alongside All-American point guard Devonte’ Graham at KU.

While Thompson then — like Mykhailiuk now — navigated the pre-draft process facing questions about his defense and athleticism, he did have a 6-9 wingspan and 8-7.5 standing reach working in his favor. A starter with the Warriors as a rookie, Thompson eventually proved skeptics wrong.

Mykhailiuk’s wingspan measured at 6-4.75 with a standing reach of 8-4 at this year’s combine. Who knows if any team will ever see him as a rotation player, let alone a starter.

Regardless of where his professional career begins or ends up, Mykhailiuk is appreciative to have teams considering him for the draft. And he’s trying to prove there’s more to him than his specialty.

Asked what area of his game improved the most during his senior year, Mykhailiuk responded with “literally everything.”

If an organization does draft Mykhailiuk, though, it will be primarily for his 3-point shooting, and because he demands so much of himself in that category.

Both Mykhailiuk and Graham worked out for Chicago on Monday, and the KU duo will again be on the same practice court Wednesday, when they put their games on display for Washington.

Svi is an interesting player, in that I think his game translates better in the NBA. His 6'7" frame is hard to guard from outside, and he has just enough dribble to make a shot. He also has the dribble shot, just outside the circle that was falling towards the end of the season. Personally, I think of the Jayhawks on our team looking to get drafted, he might be the one that slowly inches up. A team that wants to enhance their 3 Pointing capabilities, he will be a hard person to pass on.

His 3 Pt shooting % is pretty impressive.

I don't see anyone in the first round that is a better shooter from outside than Svi. I believe scouts and gm's will be making a mistake not taking Svi in the early 2nd round. Before it's said and done, Svi will end up outscoring many of the first rounders who won't be in the NBA in 4 years, mark it down

Svi showed a lot of improvement over time at KU and he is only 20, I think. He has the potential to improve across the board, though you can't get much better as a three point marksman. I think he will get a look form a a team or two and definitely get a chance to show what he can do in the Summer League.

Svi is very selective on offense. He is trying to be efficient. He is pretty versatile. A bit heavy on his feet, kind of reminds me of Harrison Barnes. He doesn't have the swag to be a star but can be a contributor most likely off the bench.