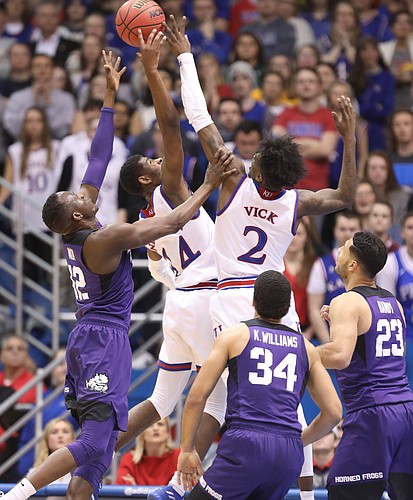 Kansas guard Malik Newman (14) and Kansas guard Lagerald Vick (2) fight for a rebound with TCU forward Kouat Noi (12) during the first half on Tuesday, Feb. 6, 2018 at Allen Fieldhouse. by Nick Krug

Kansas City, Mo. — This season’s Kansas basketball team is no stranger to getting beat on the glass. So the top-seeded Jayhawks should feel right at home this week at Sprint Center, where they will try and navigate the Big 12 tournament without injured 7-foot center Udoka Azubuike.

Without question, KU’s offense will miss the high-percentage shots Azubuike, out with a medial collateral ligament sprain, provides with regularity. But the Jayhawks also will look like a lesser version of themselves on the boards, because the sophomore big is the best rebounder on a team that oftentimes struggles to finish stops by securing an opponent’s missed shot.

A massive presence in the paint, Azubuike started every game for Kansas (24-7) this season up to this point, and led the team in rebounding 18 times.

KU won the rebound margin in three of its final four regular-season games — +13 versus Oklahoma, +7 vs. Texas and +7 at Oklahoma State. But the Jayhawks lost that battle in 15 of the 16 games that preceded their more successful stretch.

Against Power 5 competition this season (25 games), KU out-rebounded its opponent five times — the other two came against Arizona State and Kansas State.

So what does the team that finished 9th in the Big 12 in rebound margin (-2.9 a game) look like without its best rebounder? To try and get a sense of what to expect at the conference tournament, let’s look at a few of Azubuike’s less impactful games this season on the glass.

Occasionally, Azubuike, who averaged 7.1 boards on the year and 6.6 a game in league action, finished with 4 or fewer rebounds. That occurred four times during Big 12 play: 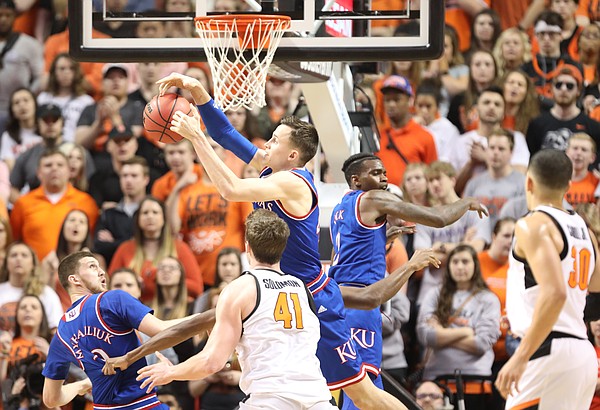 The Jayhawks lost at Baylor when no one stepped up to fill the void. Mykhailiuk, Newman and Lagerald Vick each finished with 4 boards.

KU’s rebounding numbers — and chances of advancing in the Big 12 tournament — will look a lot worse unless Azubuike’s teammates use his absence as incentive to really attack the glass.

It doesn’t sound as if Self is expecting Lightfoot and De Sousa to suddenly start rebounding like Cole Aldrich and Thomas Robinson.

“So we’re just going to have to have our guards rebound more,” Self said. “You know, Malik’s done a good job. Svi and Lagerald have got to become better rebounders probably as much as anyone.”

The numbers indicate Kansas should be able to count on Newman to get inside and clear some defensive rebounds. The 6-3 guard, per sports-reference.com, is KU’s second-most consistent rebounder on that end, gathering an estimated 15.6% of available defensive rebounds (Azubuike leads the team with a 20.2% defensive rebound percentage.)

Newman can look for some help on that end from Garrett (15.6%). Lightfoot enters the postseason with a 12.4% mark, while De Sousa, with far fewer minutes to give a better sense of his ceiling, owns a 12.3% defensive rebound percentage.

It’s unrealistic to expect any Jayhawks to match Azubuike’s offensive impact. But, chipping in as a committee of rebounders at Sprint Center will be necessary for them to get by without their game-changing center.

Devonte’ Graham: Jayhawks preparing to get by without Udoka Azubuike at Big 12 tournament by KUsports.com

A peek inside of KU basketball practice before the start of Big 12 tourney by KUsports.com

Hitchhiker: You heard of this thing, the 4-Guard Line-Up?

Ted: Yeah, sure, 4-Guard Line-Up. Yeah, the line-up Bill Self uses when he's short on bigs.

Hitchhiker: Yeah, this is going to blow that right out of the water. Listen to this: 5... Guard... Line-Up.

Ted: Right. Yes. OK, all right. I see where you're going.

Hitchhiker: Think about it. You walk into an arena, you see 4-Guard Line-Up sittin' there, there's 5-Guard Line-Up right beside it. Which one are you gonna pick, man?

Ted: You guarantee it? That's - how do you do that?

Hitchhiker: If you're not happy with the first 4 guards, we're gonna send you the extra guard free. You see? That's it. That's our motto. That's where we're comin' from. That's from "A" to "B".

Ted: That's right. That's - that's good. That's good. Unless, of course, somebody comes up with a 6-Guard Line-Up. Then you're in trouble, huh?

Hitchhiker: 5's the key number here. Think about it. 5 Guys, $5 Footlong, 5th Element. that's the number. 5 chipmunks twirlin' on a branch, eatin' lots of sunflowers on my uncle's ranch. You know that old children's tale from the sea. It's like you're dreamin' about Gorgonzola cheese when it's clearly Brie time, baby. Step into my office.

Now THAT's funny. But you could be right.

The fifth time's the charm?

The fifth horse of the apocalypse?

Seven scholarship players...5 guards + 2 bigs [?]...there is only one, two-part plan left...PLAY ZONE and CALL IN A PRIEST. OR, just maybe Sam Cunliffe somehow turns into Marvin Bagley? The only other thing making this worse today, would be Bill Walton calling the game!

No! Not Bill Walton! Don't even SAY that!