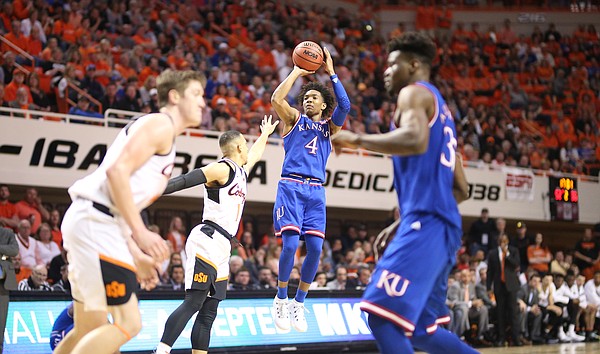 The Big 12 champions didn’t strike any fear into the hearts of the Oklahoma State Cowboys Saturday at Gallagher-Iba Arena.

In an 82-64 defeat, its worst of the season, No. 6-ranked Kansas proved once again it doesn’t match up well with OSU, which became the first Big 12 team to sweep Bill Self during his 15 years leading the Jayhawks.

Here are five statistics that contributed to the Jayhawks’ troublesome dud of a regular-season finale.

Not even Devonte’ Graham, the Big 12’s Player of the Year, can be expected to do it all every single game. So it’s hard to knock the senior point guard for an off shooting performance (4 of 14) at OSU.

How about a little help for the guy? Graham led Kansas with 15 points, but not one other Jayhawk reached double figures. It was the first time this season KU didn’t benefit from multiple double-digit scorers.

When KU lost at Allen Fieldhouse to this same Oklahoma State team a month ago, four different players put up 16 or more points.

Previously, Kansas (24-7 overall, 13-5 Big 12) had three or more players contribute 10 or more points in all but two games. KU only got double-digit points from two players in losses to Washington and Baylor.

It’s not as if this is a deep rotation capable of spreading the offensive wealth. Self relies on five starters and two bench regulars, and sometimes calls upon freshman big Silvio De Sousa. The scoring has to come from not only Graham, but also Svi Mykhailiuk, Udoka Azubuike and Malik Newman, all of whom are averaging more than 12 points a game in Big 12 play.

Shooting from beyond the 3-point arc tends to be one of the Jayhawks’ best weapons, but on Saturday the Cowboys (18-13, 8-10) out-performed the Big 12 champs from long range.

Oklahoma State made more 3-pointers than Kansas and shot a higher percentage from deep. The Jayhawks finished on the wrong end of both categories in the same game for the seventh time this season.

Kansas fell to 3-4 when being out-scored and out-shot from 3-point range. Below are the totals and percentages from those outcomes.

Somewhat troubling for Kansas, five of these occurrences came in the final nine games of the regular season.

Not much of a fight 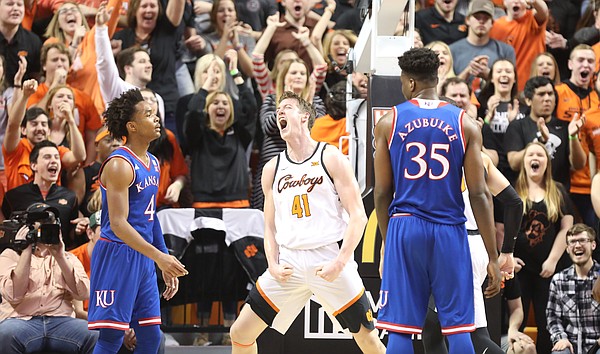 Oklahoma State forward Mitchell Solomon (41) explodes between Kansas guard Devonte' Graham (4) and Kansas center Udoka Azubuike (35) after a dunk and a Kansas foul during the first half, Saturday, March 3, 2018 at Gallagher-Iba Arena, in Stillwater, Okla. by Nick Krug

Most games swing back and forth at least a little bit in terms of momentum. The home team starts hot. The visitors respond. The home team counters. We’ve all seen it before.

Saturday’s KU-OSU matchup mostly lacked such distinct runs and comebacks — at least for the Jayhawks.

The Cowboys’ Mitchell Solomon scored the game’s first basket in the second minute of the first half and Oklahoma State led for the remaining 38:25, marking the second time this season Kansas failed to take a lead in a game. The other occasion was in KU’s Jan. 2 home loss to Texas Tech.

The Jayhawks’ largest spurt of the entire debacle came in the first half, when an Azubuike dunk, a Marcus Garrett layup and a Graham 3-pointer provided the visitors, already down 10 less than seven minutes in, with a 7-0 spark.

The Cowboys answered with a 13-0 run over the next three-plus minutes, pushing their lead to 16.

Late in the second half, OSU extended its margin to 23 points, the largest deficit Kansas has faced all season. 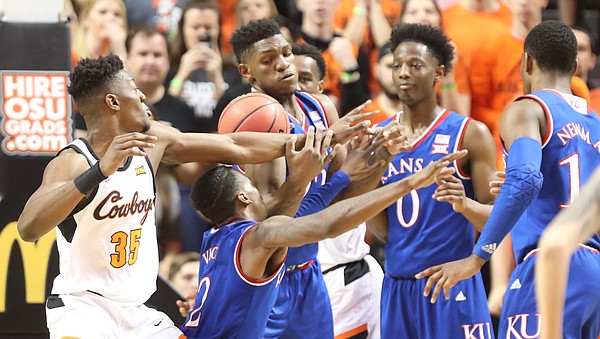 In Big 12 play this year, Kansas averaged 11.5 turnovers a game, the lowest mark among the league’s 10 teams.

However, Oklahoma State feasted on KU miscues. The Cowboys’ 11 steals were the most by a KU opponent in any game this season. The Jayhawks committed 17 turnovers in all, their highest total in 18 league games and most since committing 20 versus Tennessee State in the season opener.

Mykhailiuk and Azubuike hurt KU the most at OSU, with 4 turnovers apiece.

Oklahoma State scored 21 points off turnovers in a must-have victory. 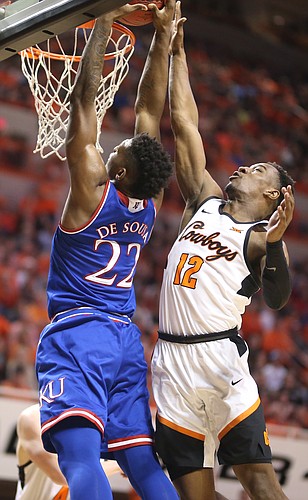 Kansas forward Silvio De Sousa (22) gets stuffed at the rim by Oklahoma State forward Cameron McGriff (12) during the second half, Saturday, March 3, 2018 at Gallagher-Iba Arena, in Stillwater, Okla. by Nick Krug

Kansas converted a low percentage of its shots inside — 9 of 21 on layups and 6 of 8 on dunk attempts — as a result of OSU’s active defense around the rim.

The Cowboys’ eight blocked shots tied for their best in a league game this year. Similarly, it tied for the most swats by a KU opponent this year. OSU even pulled it off without the luxury of having a soon-to-be NBA lottery pick, like Mo Bamba, who sent eight Kansas shots away in the Big 12 opener.

In the first half, Tavarius Shine blocked Newman, Cameron McGriff got a piece of a Mykhailiuk jumper and swatted a Newman layup, Yankuba Sima denied Marcus Garrett at the rim and Solomon stymied Garrett inside.

KU (25 of 60 from the floor, for 41.7% shooting) played so poorly offensively that Oklahoma State walked away with its first double-digit win in conference action all season. 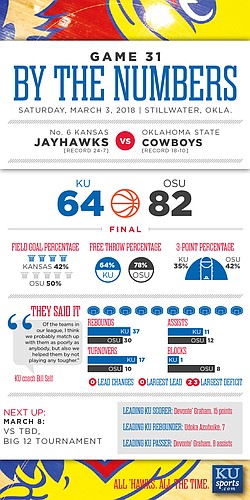 Why is KU limited to just seven players? Devonte does need help. I don't know how he holds up playing 40 minutes of every game. It is unreal to expect that of him or any other player.

Wonder if playing DeSousa (who looked good) and Doak at the same time would help. KU had nothing to play for except for pride while OSU had everything to play for. Play Doak, DeSousa, Graham, Malik and Svi. Rotate Vic (who has been pretty horrible of late), Garrett (who has been pretty good), Lightfoot (who gets pushed around inside) and Cuncliff.

Bj- I thought the same thing....Why not play 2 bigs? Nothing to lose! Then I wondered is Bill waiting until tournament time to pull this out? Maybe he doesn't want to give teams something to practice for.

Self has said they've tried playing those two bigs together in practice and it's been very ugly.

Franken-team strikes again. Every 5 or 6 games, Franken-team shows up looking less like a team and more like a bunch of disfunctioning parts. Frankly this bunch has overachieved, if the season ended today.

Fact is Self has worked a miracle with this bunch, and the only people who can do better are the players themselves.

Someone should report these observations to Bill Self.

Self was simply unable to persuade the Hawks to play the game. They just didn’t want to.

I may not have minded so much if Cunliffe was given some good minutes, even Young. I'm really not sure what went wrong on Saturday other than we just got smacked. What will concern me in the tourney is panic...In the loss to Oregon, after playing their best three games of the season winning by an average of 30, KU just flat out panicked and came apart. I am worried this team will do the same if they get down by 10 to someone. When that happens, Coach Self is going to have to take a breath and calm them down.

For this weekend, he's going to have to get them to play with the win or go home mindset, 100%. Make them feel pressure but respond positively...The Big XII tourney needs to be played like the NCAAs.

Sam and Marcus and DeSousa need to play more starting with the Big 12 tournament . Must have more help from these guys if we are to progress very far

2 out of 3 anyways. The last thing we need is Cunliffe on the floor in meaningful minutes. He was inserted in the first half against Kansas State and immediately fouled a player and then threw the ball in after a made basket to no one landing somewhere on press row.

I too have looked at Silvio and udoka on the floor at the same time. According to what people are saying, it's ugly in practice. But I don't see why trying for a couple minutes during the Big 12 tournament would be a bad thing. What makes it so bad? Just very curious. Probably won't ever find out the answer to that question until next year. Then again, our frontcourt will be monstrous next season with de sousa, hopefully dok, lightfoot, McCormack and the Lawson twins. We will not be a perimeter oriented team next season. But will still have great talent on the perimeter with garrett, hopefully newman, Dotson, grimes, (I'm counting on either vick or cunliffe or both being gone potentially). Should be a 9 man rotation with Lawson twins playing wing roles.