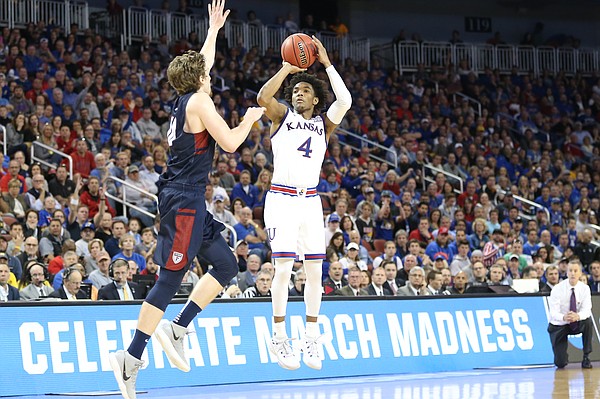 Wichita — In the days leading up to the NCAA Tournament it seemed that not one discussion of Kansas versus Penn could go by without someone referencing the success of the Quakers’ second-ranked 3-point defense.

Penn opponents, anybody who follows either team closely could surely recite, only made 29.2 percent of their shots from behind the arc before Thursday’s first-round game at Intrust Bank Arena.

The Jayhawks didn’t rely upon 3-pointers in defeating Penn, 76-60, but they did prove more effective with their long-range looks than most foes of the Ivy League champs.

In knocking down 7 of 17 from 3-point distance, Kansas (28-7) moved on to the second round having converted more 3s than 17 previous Penn opponents. Only six Quakers foes all season shot more accurately than the Jayhawks (41.2 percent).

KU’s first successful 3 came on its first attempt, off the fingertips of junior Lagerald Vick, less than three minutes in. But seven consecutive Kansas 3-point misses — from Malik Newman, Devonte’ Graham (3), Vick (2) and Svi Mykhailiuk — followed over the course of the next 10-plus minutes, contributing to a 21-11 Penn advantage on the scoreboard.

Nerves might have contributed to the 1-for-8 start, but senior Mykhailiuk credited the Quakers (24-9) for executing their game plan, as well.

“They wanted to run us off the 3-point line, and they did a pretty good job of that today,” Mykhailiuk said after hitting 2 of 3 3-pointers. “Sometimes when Devonte’s going downhill, or Malik or Lagerald or me, they’ve definitely got to help. And then if they help we’re just trying to find the open man.”

Amid KU’s string of misfires, Graham (29 points) told his teammates to keep the 3-pointers coming.

“We can't keep missing,” he figured.

A Mykhailiuk 3-pointer from the right corner 3:51 before halftime, when he baited Caleb Wood into the air and then took a hard step to his left to rise up and fire, seemed to put KU’s shooters back on track. Including that open make, the No. 1 seed made 6 of its final 9 from downtown.

Rock Chalk, here come the Jayhawks!@KUHoops cuts the deficit to one after a 9-0 run with 3:35 left in the first half! #MarchMadness pic.twitter.com/VaS6kyGBlb

Penn’s relative success in defending the arc came in not allowing KU guards to attempt as many 3-pointers as they’re used to. In Big 12 play, the Jayhawks averaged 9.4 makes a game on 24.7 tries, and hit 38.2 percent.

KU coach Bill Self said his team bailed Penn out early by taking too many contested shots.

“Defensively, they don't pressure, but they make it hard to get all the way to the basket, and then they do do a good job of contesting the 3-point line,” Self said.

Only Mykhailiuk, Graham (3 of 8) and Vick (2 of 4) made 3-pointers against Penn. Newman missed both of his looks. Considering KU entered the tournament with a 40.3 percent 3-point shooting mark and averaging 10.1 makes a game, Quakers coach Steve Donahue actually applauded his players’ perimeter defense in defeat — pointing to the fact KU only led by eight with less than seven minutes to play in a pro-Kansas building.

“Defense was awesome,” Donahue said. “Got them to shoot 18 hard 2s, something we preach. Got seven 3s for a team that makes 10.”

Kansas connected on just 1 of 5 2-point jumpers outside of the paint in each half but found 28 points off layups and dunks in the victory.

“They pack it in so well,” Graham said, “it’s hard to actually get into the paint. And the bigs, they switch up how they guarded off the ball screens, so they keep you thinking and keep you on your toes. We was just trying to keep getting downhill and make plays.”

It took some effort, but the Jayhawks drove with persistence and eventually found the open looks — sometimes inside, sometimes outside — they needed to advance.

KU will face No. 8 seed Seton Hall on Saturday. The Pirates held North Carolina State to 11-for-30 3-point shooting in a 94-83 win. Seton Hall entered the tournament with a 33.4 percent 3-point defense (98th nationally).

I'm curious in regards to the 3pt defense stat. Couldn't the team's opponents just not be great 3pt shooters?

For instance, Seton Hall has a 33.4% 3-point defense. What did their opponents shoot in the rest of their games?