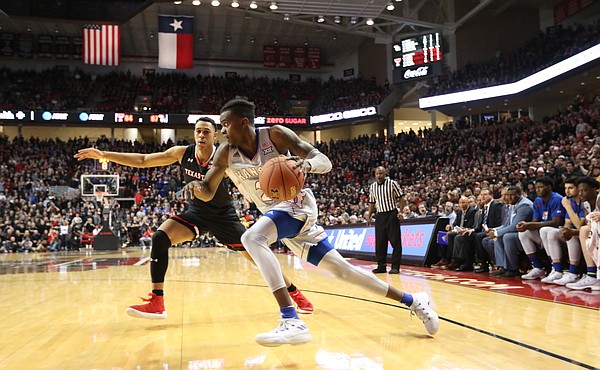 Sometimes his athleticism makes him look like the best player on the floor. Other games he can go an entire half — or longer — mostly unnoticed.

Junior Lagerald Vick’s impact from game to game is even too erratic for 15th-year Kansas head coach Bill Self to predict.

A little over a week ago, Vick scored 17 points on 7-for-11 shooting in the Jayhawks’ home drubbing of Oklahoma, his third straight game contributing double figures.

In the two games that followed, at Texas Tech and at home versus Texas, the 6-foot-5 guard combined to make 3 of 10 shots and score 6 points in 67 minutes of playing time.

Vick at least contributed 6 rebounds and 4 assists against the Longhorns, two days after giving Kansas 1 board and 0 assists at Texas Tech.

Obviously, no player is going to perform at his peak every single game. No. 6 KU (24-6 overall, 13-4 Big 12) doesn’t need Vick to be impeccable to win, but Self would like to see Vick’s below-average games not dip so severely.

“With Lagerald,” Self said, “there’s a pretty big gap.”

By far the most noteworthy correlation between Vick’s struggles and KU winning or losing show up in his 3-point shooting. A 37.2% shooter from beyond the arc as a junior, Vick knocks down 43.2% of his long-range shots in Kansas wins but connects on only 15.4% of 3-pointers in losses.

Self has witnessed Vick’s play energize his teammates at times this season, and that’s really what he wants out of the third-year guard more than anything for the season’s stretch run.

“I think Lagerald’s kind of like our X-factor. When he’s really good he gives us a whole different element as a team, because he can drive it, he can force help, he can shoot it, he could be as good a perimeter defender as we have,” Self said. “I don’t think he’s played poorly (of late). I just don’t think he’s played consistently well as he was earlier in the season. But hopefully he’ll get that back here at the end.” 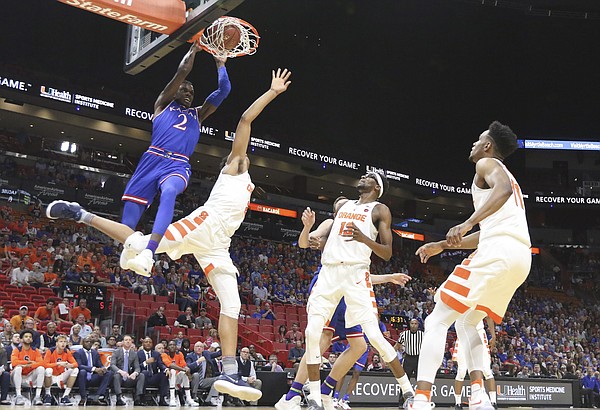 Kansas guard Lagerald Vick (2) delivers on a lob jam over Syracuse forward Matthew Moyer (2) during the first half, Saturday, Dec. 2, 2017 at American Airlines Arena in Miami. by Nick Krug

His teammates know KU is at its best when Vick is locked in and reaching his potential.

“I think we’re way better,” sophomore Mitch Lightfoot said of the Jayhawks with a prime Vick at their disposal. “Lagerald's a great player and he offers several different threats. Gives you a four-guard front that’s kind of hard (to defend), four-headed dragon, because you’ve got opportunities to score from everywhere.”

Indeed, the KU offense can look pretty menacing to adversaries, with Graham, Svi Mykhailiuk, Malik Newman and Vick playing around a 7-foot force in Azubuike.

“The hardest thing to guard is four shooters around the big,” Self said. “We're just going to play four guards that can shoot. It doesn't always work out well, but it's worked out OK so far.”

Now that it’s March, KU needs a stable Vick more than ever.

“He’s been pretty good recently,” Lightfoot said, in reference to a three-game stretch preceding Vick’s latest two games, “and he was really good at the beginning of the year, so it’s encouraging.”

Added Self: “He could really elevate our team play.”

Let's just fantasize for a moment about Lagerald putting a string of six great games together in the tournament ... Just imagine what that could mean to our chances of going all the way.

I'm pretty sure the coaching staff has Xs and Os jotted down somewhere on Vick's scoring. Go back to the tapes/Gyphies - design what would be best plays for him to contribute more offensively. He had tendencies to withdraw instead of going all the way to the basket when dribbling around top of the key. He will launch a 3pt when he's left alone, but he's not really a solid 3pt shooter. The highest % baskets he makes is off a lob Graham. He also makes baskets from FT area through jumpshots. But he can't penetrate and force himself to the basket, unlike the other guards. That's just my poor observation. Hopefully, the coaching staff does the right thing for him. We shall see Vick rise from his long hibernation. Go Jayhawk!!

He reminds me of Wayne Sheldon, inconsistent, never know what to expect, but has a lot to offer.

Selden? C'mon... Selden was a beast. He was fearless when it comes to penetration.

My wish for Vick in two words: Offensive Rebounds.

Get everyone else back on D but let Vick be our Zhaire Smith on the boards.

Let's be honest here. We all love LaGerald and yearn for him to be consistently successful. His physical skills are unquestioned. His potential seems unlimited at times. But there is growing evidence (I admit from afar) LV has some mild psychological issues which may limit his performance. Does he sulk? Pout? Lack self-confidence, or does he struggle with interest and motivation? Not sure. Do the other personalities on the team soak up so much of the air in the room that he struggles to express himself. He looks painfully shy on the interviews. Will maturity as a senior help? Maybe. He is running out of time. He could struggle to be a starter next year with some of the players coming in and the continued development of Marcus Garrett. For one thing, I don't think LV likes physical contact. He seems to prefer clean air. Given, he only weighs a buck and three quarters, but you have to grow into enjoying contact. Svi, Devonte and Malik have made huge strides here. Marcus doesn't shy away. The only way to learn to enjoy and find success going to the hole is doing it. I don't see that happening this time in the year. So my guess we will have to live the rest of this season with the appearances and disappearances of LaGerald Vick.

I think his ball handling skills are what he lacks confidence in.

Watching LaGerald dribble at times is so hard to watch. He'll drive in like 5 feet and then immediately turn and pass it out. Malik does that a lot too. Vick has had some decent games since an awful January, but I haven't seen the killer instinct since before Christmas. I'm with you, I think it's psychological for him and if he's got issues between the ears now, what's he gonna do in a high-pressure March Madness game? Our 3 point shooting, Devonte, and Udoka's foul problems are going to determine how far we go this March.

Vick reminds me a little of Brannen Greene, in that when he drives, he can be explosive and it elevates his game. And when he doesn't, he can disappear. Ok, stating the obvious here.

And c'mon. Psychological issues? That's a bit severe. The "attack" mentality is just tough to have on a consistent basis. I still haven't perfected that in my job after 35 years.