‘Way more than a shooter’: Svi Mykhailiuk out to prove his NBA worth 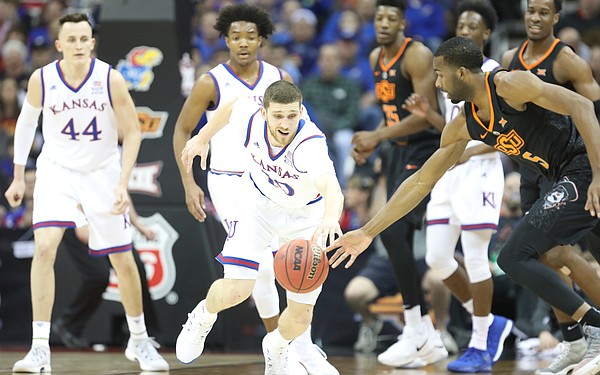 Kansas guard Sviatoslav Mykhailiuk (10) picks off a pass to Oklahoma State guard Tavarius Shine (5) during the first half, Thursday, March 8, 2018 at Sprint Center in Kansas City, Mo. by Nick Krug

If NBA prospects carried business cards with them to pre-draft workouts, Svi Mykhailiuk’s would include the phrase “not just a shooter” somewhere adjacent to his unique name.

That’s the message the … well, how should we put this … 3-point shooter from Kansas is pushing as he meets with organizations.

Since Mykhailiuk began touring the country to meet with various NBA coaches and front office members, he hasn’t abandoned the skill that makes him a draft-able prospect. The 6-foot-7.75 Ukrainian guard just doesn’t want any potential employer thinking his long-range accuracy is all he has to offer.

Asked earlier this week following a workout in El Segundo, Calif., what he wanted to show the Los Angeles Lakers, Mykhailiuk turned to his go-to pitch.

“That I can do more than shoot, because everybody knows I’m a shooter,” said Mykhailiuk, who connected on 44.4% of his 3-pointers, making 2.9 a game as a KU senior this past season. “I think I can do way more than shoot and I think I showed it today.”

The 20-year-old Ukrainian prospect said he envisions himself as a combo guard once he gets to the NBA.

🎥 Sviatoslav Mykhailiuk talks about showing that he's more than a shooter, and excelling at the Lakers Mentality drill pic.twitter.com/HJAr6WVF9W

After testing the draft waters without an agent in 2017, Mykhailiuk worked on his defensive approach upon returning to Kansas for his final season of college basketball.

“I just had to step up,” he told ESPN NBA Draft analyst Jonathan Givony. “I think I had a bigger role and I needed to embrace it.”

As a shooting guard asked to defend opposing power forwards in KU’s four-guard lineup this past season, Mykhailiuk described how head coach Bill Self basically forced him to take his defensive responsibilities personally and play with more toughness while often trying to stop larger, stronger players.

“Defense is not about physical ability. It’s all about thinking,” Mykhailiuk said. “If you start in the right position it’s going to be easier to defend.”

He’s certain playing four years at KU made him a more complete player entering the professional ranks and Mykhailiuk expects to continue that development in the years to come.

“I’m still 20 years old, and I think I have a lot of room to grow,” he said, while also telling Givony whichever franchise takes him will get “way more than a shooter.”

In the upside-obsessed NBA, Mykhailiuk’s potential to be molded into a more effective player should help his stock. In a new mock draft published by Givony at ESPN.com on Thursday, Mykhailiuk is slotted at No. 56 in the 60-pick draft. The Ringer’s mock draft doesn’t include him, but SI.com predicts Mykhailiuk will go 58th.

“Nobody knows, man.” the former KU guard told reporters in El Segundo, when asked if he had heard about where he might land. “There’s no way to really tell where you’re gonna go, so I guess we’re gonna see.”

Although he admitted to feeling “a little” worn out by all the traveling, Mykhailiuk asserted he found the process enjoyable, because there are “no distractions.” Right now, his life is just about basketball and not much else.

That focus helped him at his previous stop, with the Lakers. Near the end of a workout, prospects are put through what L.A. calls its “mentality drill.” A player is asked to dribble up and down the floor and make as many shots as possible in 90 seconds. You get one point for a layup, two for a jumper and three for a shot from beyond the arc.

The Lakers told the soon-to-be 21-year-old after the fact he finished one point shy of the best performance they had seen.

“I didn’t know the record so I kept shooting 3’s,” Mykhailiuk said, grinning. “I should’ve got two layups.”

I wish him well. One of the many things I don't like about the NBA is a 20 yr old freshman has loads of growth potential but a 20 yr old JR/SR doesn't have any. Makes no sense to me.

I think Svi is a steal in the NBA. There are a lot of NBA players that played a lot of years and on championship teams by hitting the corner 3. With the rise in stretching the defense and shooting outside 3s, I'm surprised he isn't up a little more.

He also had the dribble floater just outside the restricted zone, that seemed to give him an edge when all the focus was on his shooting.