Early one morning this past March, Rob Pelinka’s phone rang. The Los Angeles Lakers’ general manager knew whose voice to expect when he accepted the call.

As usual, it was Magic Johnson, the Lakers’ president of basketball operations. His thoughts on a player the organization had monitored closely since the previous year’s NBA Draft Combine couldn’t wait.

Both Johnson and Pelinka knew of University of Kansas guard Svi Mykhailiuk’s 3-point stroke. But Johnson needed to revisit the 2018 draft prospect with his colleague again, upon seeing the job Mykhailiuk did defending ACC Player of the Year Marvin Bagley III in the Jayhawks’ Elite Eight victory over Duke.

“At five in the morning, he called me and said, ‘That showed me a lot about him — his toughness, his mentality,’” Pelinka recalled Tuesday, as Johnson fist-bumped Mykhailiuk during the Lakers’ introductory press conference for the Ukrainian guard and Moe Wagner, first-round pick out of Michigan.

Bagley went on to become the No. 2 overall pick in last week’s draft. And although the Lakers were able to wait until the 47th pick to snag Mykhailiuk, it became clear the four-year guard from KU solidified himself as a draftee in the Lakers’ eyes with his overall efforts against Duke — a game in which Mykhailiuk also hit a 3 that sent it to overtime. 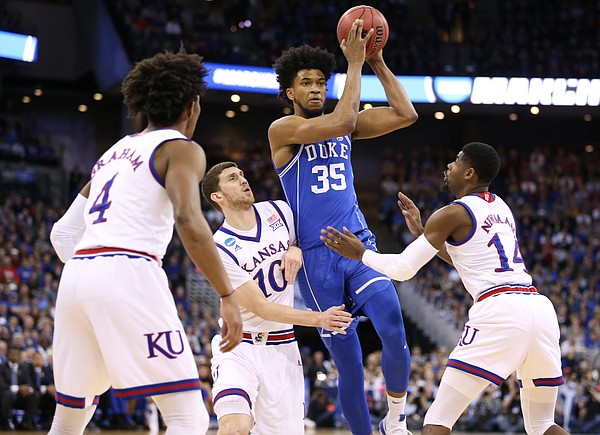 “We have some core principles of how we want to build this team,” Pelinka said. “And it’s guys that are tough, guys that have a high basketball IQ, love the game, love to compete, that can shoot, that are skilled. (Johnson) saw that in that game with Svi, and our scouting department saw that, as well.”

Now a 21-year-old rookie with the Lakers, Mykhailiuk sat in between Johnson and Wagner wearing a gray suit and black tie as one of the most famous and successful basketball players in history described his potential.

Johnson revealed that L.A. interviewed both Mykhailiuk and Wagner (the 25th overall pick) at the 2017 combine, before both players decided to return to college for another year.

“We felt both of them got better, got stronger,” Johnson said, adding selecting each was a “no-brainer.”

The Lakers finished next-to-last in the NBA in 3-point shooting (34.5 percent) and worst in free-throw shooting (71.4 percent) during this past season, stats referenced by Johnson while lauding the value of the organization’s newest players.

“But today is a big upgrade. We set out to get shooters in this draft and guys that could stretch the floor, guys who have high basketball IQ, guys that were competitors and tough-minded. Both of them come from extremely successful programs in college,” Johnson added, crediting KU’s Bill Self and Michigan’s John Beilein for molding the incoming rookies. “We felt when we looked at both of them, they could add to our team what was missing.” 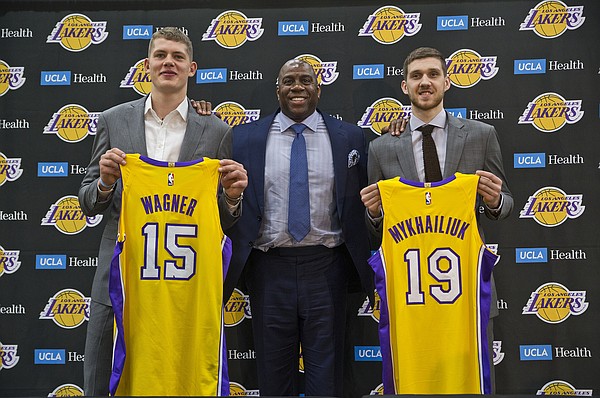 Los Angeles Lakers president of basketball operations, Earvin "Magic" Johnson, center, poses with Moritz Wagner, left, and Sviatoslav Mykhailiuk during a press conference to introduce the Lakers draft picks, in El Segundo, Calif., Tuesday, June 26, 2018. Magic Johnson is betting his job on his free-agent recruiting skills for the Los Angeles Lakers. Johnson says he will step down as the Lakers' president of basketball operations if he can't persuade an elite free agent to sign with his club within the next two summers. (AP Photo/Damian Dovarganes)

As his parents, Inna and Iurri watched, Mykhailiuk told reporters in L.A. why he decided to leave Ukraine as a 16-year-old. He remembered watching a college basketball game on TV and thinking it looked “fun.”

“Also, I was trying to go to the NBA, and for me it was going to be better to go through college,” he explained, adding he picked KU because it’s “one of the greatest schools, and I think it was a good choice for me.”

Plenty of obstacles await the 6-foot-8 rookie guard now that he has achieved his childhood goal. Mykhailiuk said, though, playing within L.A.’s switching defensive scheme should not be as challenging, because he spent his final season at KU defending spots one through four on the floor.

“We had a lot of good guards and kind of short on bigs, so I had to switch a lot,” Mykhailuk said, with his new, gold No. 19 Lakers jersey sitting on the table in front of him. “So for me, I think it’s going to be pretty easy, because I used to play it a lot.”

A new Laker and L.A. resident, Mykhailiuk still is learning the ins and outs of his first job as a college graduate. Before concluding the press conference by posing for photos, including one with his parents, Mykhailiuk said he knows the coming days, weeks and months will be filled with adjustments.

“I would say just figuring out my routine,” he predicted of his adaptation process. “How to be a pro. Just figure out our lifestyle.”

Svi is geared up. Number 19 is ready to meet LA tomorrow at 10 am PT on https://t.co/U97mTRLR2f and @SpectrumSN pic.twitter.com/NOuWY4t2MS

That Duke game was Mykailuk’s and the team’s masterpiece.