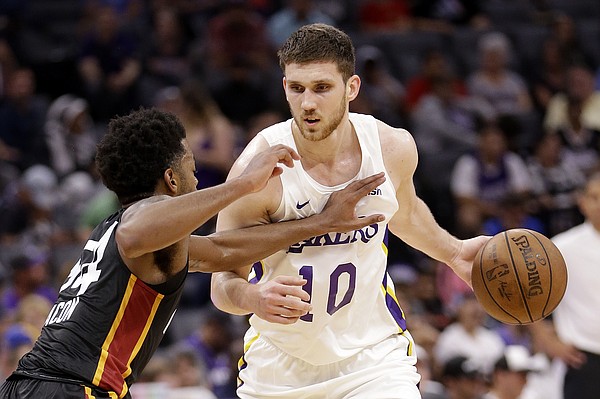 Some around the NBA may have found themselves caught a little off guard the past couple of weeks by the summer success of Los Angels Lakers second-round pick Svi Mykhailiuk.

L.A. assistant coach Miles Simon is not one of those people.

After Mykhailiuk scored 15 points and the Lakers improved to 4-0 at the Las Vegas Summer League on Thursday night, Simon, the team’s summer head coach, said “nothing” the rookie out of Kansas does falls within the realm of unexpected for him.

“I worked in TV nine or 10 years. The last four or five I worked in the Big 12 Conference. I’ve seen Svi since he was a freshman — seen him in practice, seen him in games,” Simon said of the 21-year-old Mykhailiuk, while speaking with reporters. “It’s not a surprise that he puts the ball on the floor. He’s a smooth athlete. He moves up and down really fluidly on the offensive end. He has a good handle, he can create his own shot. I’ve been seeing those things before he got to the pros and now he’s just going to show everybody else what he can do.”

The Ukrainian guard’s offensive versatility became a popular topic following the Lakers’ win over the Clippers, which included a third-quarter step-back jumper he drained after twice crossing over his defender, Thomas Wimbush.

A video of the smooth highlight posted on the Lakers’ Instagram account garnered a like from Mykhailiuk’s most influential teammate, LeBron James, and the following assessment from a Laker who witnessed it in person, Josh Hart.

As those who followed Mykhailiuk closely at KU might have guessed, he didn’t sound even a smidge braggadocious while describing his highlight.

“I handled the ball and the guy just started pushing me, so I had to put on a couple moves and just score,” Mykhailiuk plainly stated, a couple days after signing his rookie contract, reportedly for three years and $4.6 million.

Hart (22.5 points per game) and Mykhailiuk (14.0 points) have carried the Lakers’ offense in Las Vegas. The rookie from Kansas, again predictably, downplayed his recent showings and any personal expectations he had for the summer league stage.

“Just play basketball and whatever happens happens. I never thought about anything,” Mykhailiuk said. “I just come on the court and play.”

The No. 47 overall pick in the 2018 draft, Mykhailiuk hasn’t been flawless in Las Vegas, but he is making people notice his potential to stick in the NBA. Thus far he has scored at least 15 points in three of his team’s four games:

Simon said he doesn’t even know why Mykhailiuk was still available so late in the second round, especially after what the four-year Jayhawk showed the Lakers during the pre-draft process.

“Svi just came out and impressed in the draft workouts and he positioned himself,” Simon said. “We’re lucky to have him.”

It’s difficult to foresee at this point just how significant a role Mykhailiuk will play for the Lakers when the regular season arrives. The team loaded up on veterans upon winning the NBA summer with its signing of James, and L.A. already had talented young guards in place. More roster moves could come, but right now Mykhailiuk would likely play behind shooting guards Kyle Kuzma and Hart, and perhaps Lance Stephenson, too.

Asked what type of impact he envisions for his first year, Mykhailiuk didn’t seem particularly worried about his status.

By the time the actual season opens in October, Mykhailiuk said he wants to improve at “literally everything” as a basketball player.

The Lakers and Mykhailiuk will play in the Vegas quarterfinals Sunday.

🎥 Svi Mykhailiuk gives his own perspective on the step-back J that had everybody talking. pic.twitter.com/V7xZvoqLly

Svi's chances of sticking with the Lakers took a huge step forward when they signed Lebron. He knows he NEEDS a Jayhawk to win it all. Probably what kept him short recently.

Svi had another very good game last night, pouring in 31 points in the Lakers' 2OT win over te Cavs. Summer League or not, I have to think that Svi has gained Luke Walton's attention and will have a shot in training camp to show that he should be in the Lakers' rotation.

I read that only the 1st year of his contract is fully guaranteed, so if he can show he can play in the league, he could have a lot of teams after him next offseason