'Turned up' Udoka Azubuike shows he can defend on perimeter, too 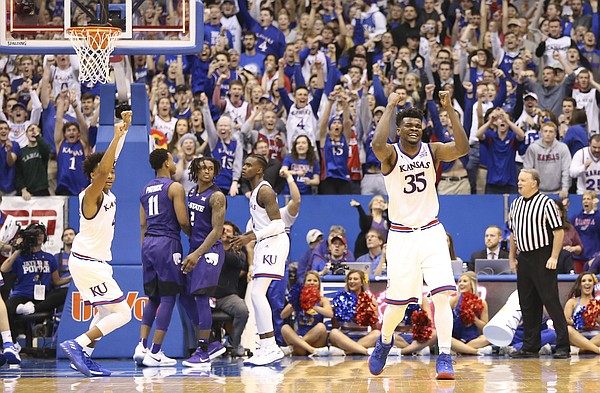 During most of Saturday’s Sunflower Showdown inside Allen Fieldhouse, the Kansas defense found little success in trying to defend 6-foot-10 junior Dean Wade. The forward thrived when the Jayhawks tried to defend him one-on-one, and Wade shot 8-for-14 from the floor on his way to a team-high 22 points.

After KU dodged its third fieldhouse defeat of the season with a 73-72 victory over its rivals, head coach Bill Self described Wade’s offensive showing as “fabulous,” but also made sure to praise his sophomore center, Udoka Azubuike, for a couple “great” defensive sequences late in the game when asked to stop Wade.

The No. 12 Jayhawks (14-3 overall, 4-1 Big 12) don’t often have their 7-foot sophomore defend opposing bigs who spend much of their time operating on the perimeter. In the final minutes of a tight game, Self let his the big man and his teammates know K-State (12-5, 2-3) would look to use Wade on ball screens and then have him pop open for jumpers of face-up opportunities.

Azubuike already had blocked five Wildcats shots on the afternoon when his 280-pound frame entered the defensive spotlight for the game’s final seconds, along with sophomore guard Malik Newman, on the perimeter, far from the paint, where he is most comfortable and effective.

With the game clock ticking down, Wade came up from the left block to set a ball screen for Barry Brown Jr. The first time Wade tried to get involved, he came away from a screen on Newman to move over to the top of the key, and Azubuike stayed with him.

“When I saw that he set the screen he went to the other side and I knew (Brown) was going to pass the ball to him, so I tried to deny the pass to him as fast as I can,” Azubuike said of a pass that never came.

Instead, Wade came right back to Brown for another pick. Azubuike made one quick defensive slide to his left to make sure Newman had time to recover. The center extended his long right arm upward when he saw Brown gather for a potential game-winning 3-pointer, and by the time Brown got his shot off Newman had arrived to contest it even better.

Here's the final shot of the KU/K-State game. Barry Brown misses at the buzzer & #kubball survives with a 73-72 win. pic.twitter.com/rP2y8uLFLE

None by Matt Gasper

“I just tried to get a high hand,” Newman said after the dramatic ending, “and big fella did a great job of getting a high hand.”

According to Newman, Azubuike has improved as a perimeter defender in those situations.

“He’s doing great. I think every day he’s getting better and better. For him to be that big and that mobile I think that just says a lot about how much he’s been working in the weight room and things like that,” Newman said, adding the big man’s back is doing “much better,” allowing Azubuike to play with more activity than he had in previous weeks. “He’s had great energy since I saw him this morning, so I knew he was coming ready to play.”

Self didn’t consider putting Azubuike on Wade in a potential pick-and-pop situation as ideal, so the Jayhawks may have been fortunate Brown opted for the contested 3 instead of a pass to Wade on the action.

Still, Azubuike reacted appropriately under pressure out of his element. Asked whether he trusts the second-year center to defend such actions, Self’s reply showed the coach thinks Azubuike often doesn’t meet his potential when defending on the perimeter.

The effort was there with the game on the line. Now Self will want to see Azubuike move swiftly and smartly every time the young big is outside of the paint, helping defend the perimeter.

those 5 blocks are impressive. Dok needs to do that more consistently. 8-10 rebounds are expected out of him. not sure if perimeter defense always a good thing out of him. his man got so many bunnies left alone under the basket. Great awareness of Vick, too. That needs to be highlighted during team meeting!!