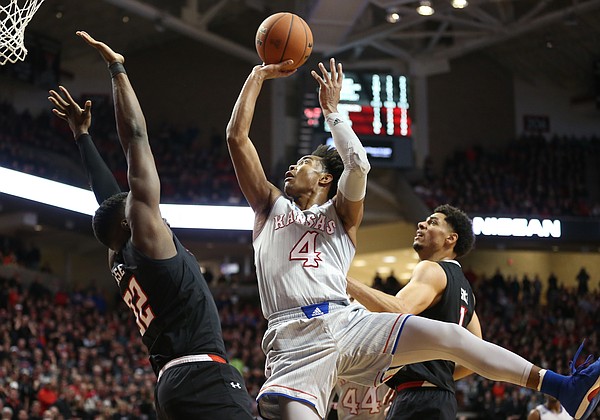 Kansas guard Devonte' Graham (4) puts up a shot after a foul from Texas Tech center Norense Odiase (32) during the second half on Saturday, Feb. 24, 2018 at United Supermarkets Arena. by Nick Krug

The No. 8-ranked Kansas Jayhawks headed to No. 6 Texas Tech this weekend armed with the knowledge it would take a complete performance to win on the road and accomplish something special.

And then they went out and made it happen.

KU secured at least a share of an unprecedented 14th consecutive conference championship, edging the Red Raiders, 74-72, on Saturday .

Devonte’ Graham went to Lubbock, Texas, to win a Big 12 title and cement his case for conference player of the year. The senior point guard didn’t state his intentions ahead of the anticipated showdown with Texas Tech, but he sure showed them in the decisive half.

The Jayhawks converted 10 field goals over the game’s final 20 minutes and Graham provided 7 of them. Not done there, Graham also assisted on 2 other KU baskets, with passes to Mitch Lightfoot and Malik Newman.

Graham’s pair of second-half 3-pointers — one at the 8:30 mark and another with 4:40 left — both pushed KU’s lead to 8, the largest margins of the final half.

The Jayhawks’ floor general and team leader scored 18 of KU’s 33 second-half points off 7-for-13 shooting, while the rest of the Jayhawks were a combined 3 of 12.

No deficit for Kansas

Let’s be honest. Who would have predicted the Jayhawks would play on Texas Tech’s home floor and not trail for a single second?

The Red Raiders had won 17 straight inside United Supermarkets Arena. It seemed unfathomable, but Tech played the entire 40 minutes without ever taking a lead against Kansas.

Three-pointers from Svi Mykhailiuk and Graham fueled an 8-0 Kansas start. And though the Red Raiders would eventually tie the game at 68 with 2:32 left in the second half, KU’s defense forced turnovers on the home team’s next two possessions, while Graham scored twice, pushing the Jayhawks’ lead back out to 4.

Prior to that, each time Tech threatened to take momentum while making it a one-possession game, the Jayhawks had an answer. Whether it was a bucket from Graham for an old school 3-point play, a Newman 3-pointer of a Graham layup, Kansas always found a way to keep Texas Tech down, as the home team shot 36.7% from the floor in the second half. 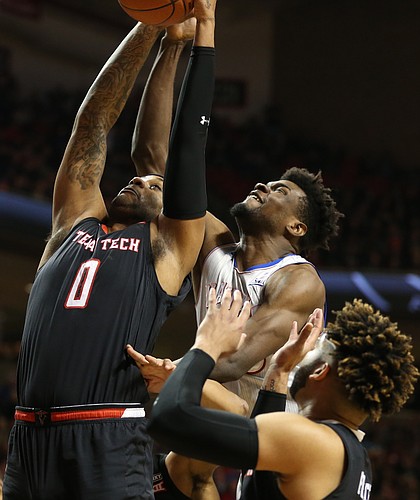 Kansas center Udoka Azubuike (35) fights for a rebound with Texas Tech forward Tommy Hamilton IV (0) during the first half on Saturday, Feb. 24, 2018 at United Supermarkets Arena. by Nick Krug

Udoka Azubuike didn’t have one of his more memorable games, finishing with just 6 points and 7 rebounds in 29 minutes. But it’s just as important for Kansas that the 7-foot center take an active approach defensively.

Was the big man perfect? No. But a good way to measure the effort he’s exerting is by tracking his results on the defensive glass. Azubuike finished a KU stop with a defensive board 6 times. It was just the fifth time in Big 12 play this year he reached that total.

The Red Raiders challenged Azubuike, making him work for position and rebounds, and he often responded correctly. The sophomore center jumped as high as he ever has for a few rebounds.

On another occasion, he battled a Red Raider to smack a missed Tech shot into the hands of Newman, who got credit for the rebound in the box score. Early in the second half, he hustled back on defense to take away a potential Tech layup, and in doing so forced Tommy Hamilton IV into a turnover. With just more than a minute to play, Azubuike and Mykhailiuk trapped Zach Smith on the baseline, pressuring him into a pass out of bounds and an untimely giveaway.

Plus, Azubuike swatted away three Red Raiders shots, denying Smith twice and Culver another time inside.

Tech kept KU’s massive sophomore from his typical array of powerful dunks, but Azubuike didn’t let any frustrations with his lack of offense carry over to every aspect of his game. He can, and needs to be, better on the defensive glass (see: Tech’s 15 offensive rebounds), but Azubuike’s motor seems to be becoming more consistent. 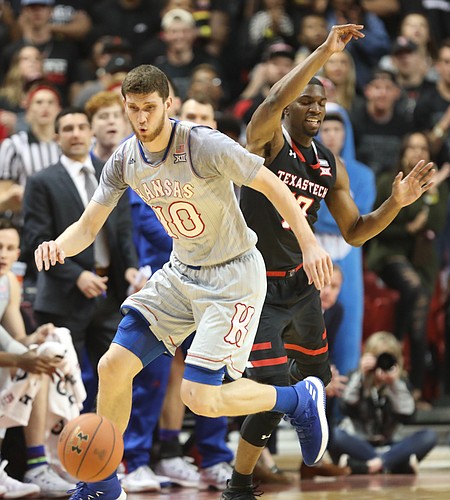 Texas Tech star Keenan Evans hasn’t been himself since injuring a toe the week before Saturday’s meeting with Kansas. To Evans’ credit, the senior is attempting to play through pain. But the timing couldn’t have been worse for the Red Raiders.

Evans played 31 minutes against Kansas, the most for Tech’s primary guard since hurting his toe, but made just 1 of 6 shots from the floor and 4 of 6 free throws, finishing with 6 points and 3 assists.

In the seven games before suffering the injury during a loss to Baylor, Evans averaged 24.6 points and 3.7 assists. He hasn’t been able to play as assertively since. Would Tech have defeated BU and Oklahoma State with a healthy Evans? Would KU have been able to win on Tech’s floor with the Red Raiders’ best player at full strength? We’ll never know for sure, but KU certainly has benefited in the standings from the inconvenient timing of Evans’ setback. 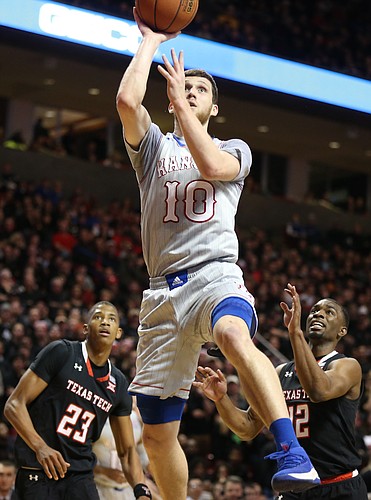 In a game between the Big 12’s two best teams, Kansas led by as many as 11 points on the road before halftime because Texas Tech couldn’t stop Mykhailiuk in the first half.

The senior guard from Ukraine helped his team build confidence early, knocking down three 3-pointers in the first 10 minutes. Mykhailiuk scored a first-half best 15 points on 5-for-10 shooting and also assisted a Graham 3-pointer, a Lightfoot basket and an Azubuike jam before intermission.

Mykhailiuk finished with 21 points, second only to Graham’s game-high 26, and tied with Graham for the game’s highest assist total, with 4. Fitting that two seniors carry Kansas to a historic accomplishment. 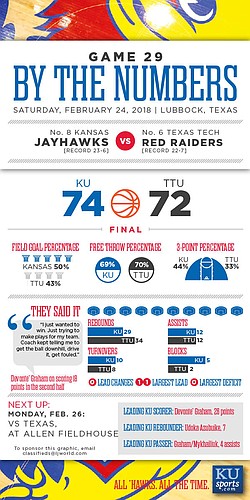 I think Dok might've gotten 4-5 blocks, easily. Our defensive rebounding not that bad, but needs improvement, a lot. Need lots of boxing-outs...

“Early in the second half, he hustled back on defense to take away a potential Tech layup, and in doing so forced Tommy Hamilton IV into a turnover. “

You don’t see many seven footers doing that!