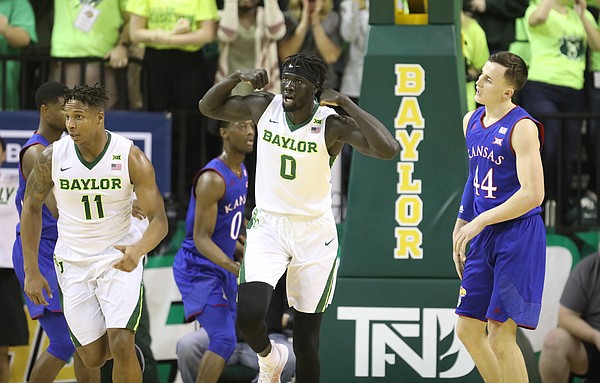 Baylor Bears forward Jo Lual-Acuil Jr. (0) flexes next to Kansas forward Mitch Lightfoot (44) after a bucket during the first half, Saturday, Feb. 11, 2018 at Ferrell Center in Waco, Texas. by Nick Krug

Almost nothing went right for Kansas on Saturday, in an 80-64 loss at Baylor.

From a pre-game black eye for senior Svi Mykhailiuk to failing to match the Bears’ energy, Bill Self’s team had far more problems than solutions during its trip to Waco, Texas.

And a 40-percent shooting performance for the offense was just one cause for concern for the Jayhawks.

Here are five stats that stood out from a defeat that Kansas will have to find a way to put behind it quickly.

No stops to be found

As poorly as Kansas played offensively in the first half (20 points), the defensive end proved even more costly for the Jayhawks during the final 20 minutes.

The Bears converted on 17 of 26 field goal attempts (65.4%) in the second half to drop another 50 points on a faltering Kansas defense.

Both Manu Lecomte and Nuni Omot hit KU with 4-for-5 shooting in the closing half.

The Bears made 14 of their final 20 attempts from the floor. Although they turned the ball over 8 times in the second half, at no point did Kansas manage to make Baylor miss consecutive shots.

BU’s 57%-shooting in the victory was the best marksmanship by a KU opponent this season.

While the free-throw line hasn’t always been kind to Kansas (69.3 percent in Big 12 play), getting there with regularity had at least become a strength for the Jayhawks, who struggled to do so during much of the non-conference schedule.

KU, which came in averaging 21.4 free-throw attempts in league games, took a step backward against Baylor, with only 9 shots taken at the foul line.

Though Kansas made 8 of 9 free throws, it marked the team’s fewest attempts in a league game (previously 13 against Iowa State).

Speaking of easy points, KU didn’t get any in transition. The general lack of quick-change opportunities off steals (3) and blocks (3), certainly didn’t help. 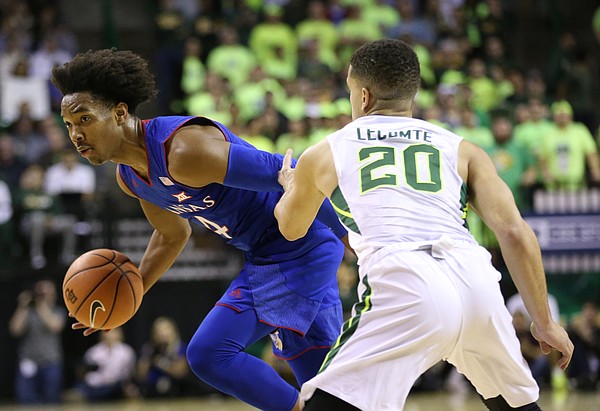 Kansas guard Devonte' Graham (4) tries to get around Baylor Bears guard Manu Lecomte (20) during the first half, Saturday, Feb. 11, 2018 at Ferrell Center in Waco, Texas. by Nick Krug

Easily KU’s best and most important player, Graham put in 8 of 17 shot attempts (4-for-10 shooting on 3-pointers) to lead Kansas with 23 points.

The Jayhawks had such an off-kilter offense against BU, though, that even Graham could only come up with 4 assists, a season-low for the floor general. His 3 turnovers were only slightly above Graham’s season average of 2.8.

As awry as Kansas looked offensively with Graham playing the entire way, it’s kind of frightening to think about how poorly things would have gone had he come out of the game even for a minute or two in either half. 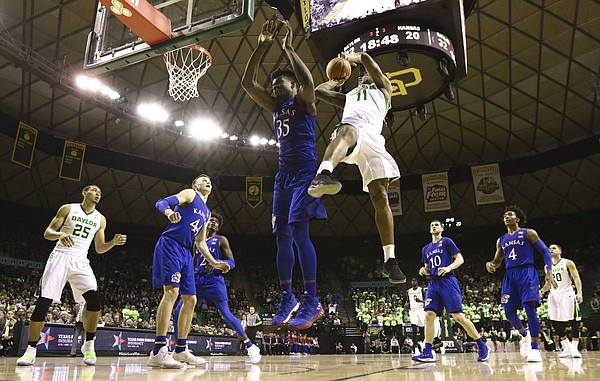 Baylor Bears forward Mark Vital (11) puts up a shot after drawing contact from Kansas center Udoka Azubuike (35) during the second half, Saturday, Feb. 11, 2018 at Ferrell Center in Waco, Texas. by Nick Krug

Once Baylor achieved a 10-point lead just before halftime you figured the Jayhawks might be in trouble. Unlike last year’s KU team, which routinely climbed out of holes, this group hasn’t been so fortunate.

The Bears built their lead as large as 16 points in the final minute, and became the seventh KU opponent this season to lead by double figures. As was the case for Kansas against Washington, Arizona State, Texas Tech, Oklahoma and Oklahoma State, the Jayhawks (19-6 overall, 8-4 Big 12) came up short.

This season, only West Virginia, which led by 16, has taken a double-digit lead against Kansas and lost.

The Jayhawks are now 1-6 when trailing by 10 or more points in a game.

When both Udoka Azubuike and Mitch Lightfoot had 4 personal fouls on their stat lines with more than 11 minutes left in the game, Self decided to give first-semester freshman big Silvio De Sousa another look.

Earlier in the week, in KU’s home win over TCU, the 6-foot-9 freshman never got off the bench. The foul trouble and situation —KU down six points on the road in the second half — almost forced Self to at least give De Sousa a chance.

Upon checking in, De Sousa started off positively enough, deflecting an inbound pass underneath the hoop. But that proved to be the apex of his brief appearance. On the ensuing defensive sequence, De Sousa was manning the paint but failed to step up and effectively contest a successful King McClure floater.

When KU headed to the other end of the floor on offense, Lagerald Vick hit De Sousa with an entry pass on the right block but the young big man used a blatant extended left forearm to try and fend off Jo Lual-Acuil as he went in for a layup, that was called off due to an offensive foul.

The stoppage allowed Self to re-insert Azubuike, and De Sousa checked out having played 28 seconds and contributed nothing statistically, other than a foul and a turnover.

In each of De Sousa’s previous six appearances he has played 2 or fewer minutes. The Jayhawks actually needed him on this occasion, but Self didn’t trust the freshman to do anything other than hurt his team’s chances.

In six of his eight games for KU, De Sousa has come away with 0’s in both points and rebounds.

Here is another one for someone to rub in your face in the coming years...

You've been able to determine - after a handful of minutes - that Silvio has no skill or basketball IQ?

Absolutely! After 1 month of practice, every HS Sr should be a well oiled cog for an elite D1 team. No one ever develops after their first month in the program.

A few weeks ago he was taking high school classes. Lighten up...and get ready for next season - this one is basically over.

Exactly. It's not like he has been here the whole season. The practices and occasional/rare game minutes just give him a head start on next season. He's very likely going to be really good next season.

And yet... Self didn’t trust the freshman to do anything other than hurt his team’s chances.

Excuse me, chances for what? I would rather coach develop this young man this season. That post move right there is a great move to the basket by any bigs. He will have no confidence doing it in the future. In his head he will think "oh, sh*t, if I do this strong move again, coach will bench me.. let me just kick the ball out for safety... "

Good move, coach. It's 1 PF. Turn him into Lightfoot. Yeah, we've got open guys - spotting up for 3s.. Good luck, DeSousa.. I will root for you wherever you are.

Chances for a W?

And yet when Coach plays Dok in order to maintain confidence in him on the way to 7 missed FT, the arm chair, non HOF coaches rip Self for not yanking him.

Is the right move to leave a player in to fail (repeatedly?) or show no confidence and yank the player?

Hypocrisy at its bloggy best.

That's a totally different scenario, Dirk, and I'm always fine leaving Dok in the game - in fact, for the entire game - each game, if he's got the stamina. Yanking and not playing a player for the rest of the game is like punishing the player. It's detrimental to the player's confidence, something that BS never seems to realize. But if he yanks the player - saying "that's a preeety darned good post move, but I'd rather you not too strong with your left arm next time", and then give him another chance for him to prove that he's learned the better way immediately, I guarantee he'll be in no time a well-rounded, confident and improved player. That's trust. Put trust in your players. Be it Wiggins or Pierce.

Mistakes are made by all players. If DeSousa was allowed to continue to play after making a mistake that would help his confidence. Right now he has no confidence. So either don't play him or don't give a jerk after a few seconds.

That was my first thought too, but we don't know what he's doing or not doing in practice. That could have been one of those moves where Self has told him over and over not to do it, yet he did it anyway. Maybe Self needed to reinforce that message.

And yet when Coach plays Dok in order to maintain confidence in him on the way to 7 missed FT, the arm chair, non HOF coaches rip Self for not yanking him.

Is the right move to leave a player in to fail (repeatedly?) or show no confidence and yank the player?

Hypocrisy at its bloggy best.

I think if every game wasnt so close Self would be much more open to letting him play through mistakes..BUT, seeing as how every game is so close with no room for error, its hard to leave him in there for any real length of time if he isnt showing anything..problem is, this team doesnt play good enough D to blow anyone out

I wonder... which KU player (current and in the past) was able to develop and effectively contribute to the team with 2 minutes average playing time? Anybody comes to mind?

There are plenty of players that have rode the bench as freshmen and contributed to the team in subsequent years as they develop. Most get more minutes because they also get more time to learn and a non-con season that's not nearly as competitive.

KU is a mentally and physically tired basketball team that shows little positive emotion. Watching KU play is like an episode of the "Walking Dead". They are just ...there. No defensive passion; no leadership being displayed. Last 3 Games: Svi is 2-16 shooting 3s; Vick: 1-11; Newman: 5-20; Graham: 11-22. In those games Svi and Vick, both good free throw shooters, managed to shoot just 9 combined free throws in more than 72 minutes on the floor (7-9, 78%)! Drive the ball! Combined KU shot 74 threes (28.6%) in these games. The more frustrated they get about their shots not falling the weaker they play on defense. Sam and Silvio are going to have to play more minutes, just to allow these starters to rest. Go to a 3-2 and try to cover-up KUs poor defensive fundamentals.

And Graham was bleak the week or 2 before.

Can you all imagine to see Preston in KU uniform had his case was to our favor? Hmmmm... I can imagine he is happy now, for sure.

why would you assume he is "happy"..my guess is he is more upset and frustrated that he never got to play in regular season games..just imagine how he feels seeing his former teammates get out rebounded, out hustled and all around beaten up KNOWING HE would have prevented that if he could have played...happy he is not