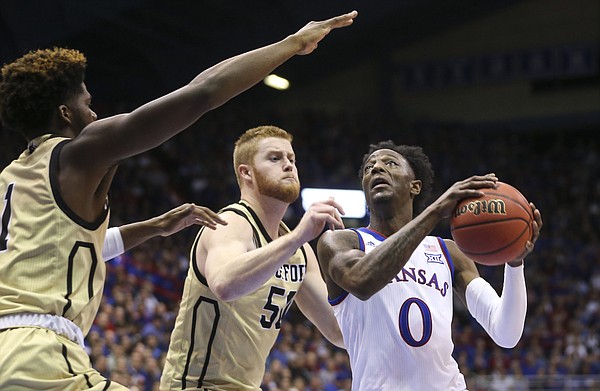 Kansas guard Marcus Garrett (0) moves to the bucket past Wofford center Matthew Pegram (50) during the second half on Tuesday, Dec. 4, 2018 at Allen Fieldhouse. by Nick Krug

Your best post player goes down. Time for another to step up, right?

Not for this Kansas basketball team.

The absence of center Udoka Azubuike, no matter how long the 7-footer’s right ankle sprain keeps him out of the lineup, doesn’t necessarily mean more minutes for the frontcourt reserves who have been backing him up.

Head coach Bill Self loved the talents of Azubuike and Dedric Lawson too much to not go big and play them together. But now that his starting center is out, Self’s ready to adapt by reviving the four-guard look that worked so well for the Jayhawks the past couple of seasons.

While Lawson, a 6-foot-9 redshirt junior, isn’t the type of low-post player Azubuike is, Self isn’t going to ask his versatile forward, who leads the No. 2 Jayhawks in scoring (19 points per game), rebounds (10.7) and assists (3.1) to try to be someone he’s not. And Self has no intention of forcing junior Mitch Lightfoot or freshman David McCormack into the lineup as a pseudo-Dok just because that’s the style KU played during its 7-0 start.

The offense will start running through Lawson even more now, as guards Devon Dotson, Quentin Grimes, Lagerald Vick and Marcus Garrett play around him. If Lawson (32.7 minutes a game) needs a breather, then Self will turn to either Lightfoot (6.6 minutes) or McCormack (4.5 minutes) a little more than he has previously.

But even when KU is faced with defending a team that plays two bigs together, Self doesn’t think that will force him to match it. Garrett, a 6-5 sophomore guard, proved earlier this week in KU’s 72-47 victory over Wofford he can more than hold his own as the 4-man, the role occupied in recent four-guard lineups by Svi Mykhailiuk and Josh Jackson.

“We defended them so much better with Marcus on their big guy,” Self said of one factor that convinced KU’s coaching staff to start Garrett instead of another big in Azubuike’s spot. “I have confidence in Marcus defending the 4-man. Now we may need to trap the post or do some things like that. But I think that’s good for us.”

Ask a guard about the in-season modification to the Jayhawks’ style and he’ll think about what it will do for the offense.

“That gives us a bunch of freedom,” Grimes said of Garrett joining the starting lineup. “Really whoever gets (the ball on a defensive stop), all five can essentially bring it. So I think it’s definitely going to help us out for sure.”

Grimes envisions not only he and Vick catching more lobs but also he and Garrett throwing more of them.

Self, though, isn’t moving to a four-guard lineup because he’s concerned about anyone’s enjoyment or entertainment. He’s backing away from a two-big approach because Garrett’s defensive versatility makes it an easy decision.

“He’s got good size, he’s got long arms,” Self began, when asked how Garrett is able to guard both perimeter and post players. “But he is very, very smart. As far as IQ and understanding the game on the defensive side, he’s right up there with the best that we’ve ever had. And he’s tough. And he’s strong. And he pays attention to scouting reports. So he knows when to show, when not to show, when to front. … He just does a better job, I’d say, than the majority of college players out there early in his career, because he does have a great feel defensively.”

And, believe it or not, Self and his staff have long thought this year’s KU team has a chance to become “really good” defensively. Self said Thursday that may even end up becoming this group’s identity.

For much of the first six games, that didn’t look to be the case. But Self saw during Tuesday’s win over Wofford glimpses of speed and length and activity from his guards that he and his assistants first witnessed during both the summer and fall.

He’s not ready to call KU a good defensive team yet. Self remembers how his team “stunk” on that end of the floor against Stanford just five days ago. But he has observed both improvement and potential.

If that’s the vision, it may be difficult for either Lightfoot or McCormack to play huge minutes, even if they play well. KJ Lawson and Charlie Moore can step into the four-guard lineup around Dedric Lawson as needed. And Lightfoot and McCormack can sub in and still find ways to impact the game.

“We’re similar but still different,” the 6-10 McCormack said of what he and the 6-8 Lightfoot bring. “We’re both high intensity, both hustle players, both rebounders. There’s some aspects that Mitch does that I don’t. Like Mitch might step out and he’ll shoot a 3-pointer every now and then — something I may not do,” McCormack added. “Me, I’m more back to the basket. He may want to face up. So there are some differences, but there are some similarities at the same time.”

McCormack has the build and McDonald’s All-American pedigree to potentially perform his way into more playing time. And Lightfoot remains a strong help-side rim protector, as well as the best Jayhawk at taking charges.

But if neither ends up seeing a huge uptick in minutes while Azubuike is out, you won’t see either of them sulking. They’re two high character teammates, too, who will do all they can to contribute in a four-guard lineup that isn’t built to feature them.