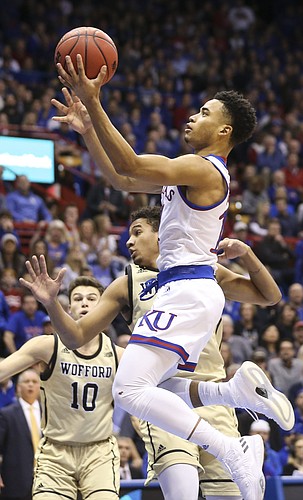 Kansas guard Devon Dotson (11) floats in for a bucket during the first half against Wofford on Tuesday, Dec. 4, 2018 at Allen Fieldhouse. by Nick Krug

Quick grades for five aspects of the Kansas basketball team’s 72-47 win over Wofford on Tuesday at Allen Fieldhouse.

KU opened with another choppy first half offensively, and only led 29-26 at the break after shooting 13-for-29, with Lagerald Vick coming off the bench because he was late to shootaround.

KU turned the ball over seven times before intermission and only shot 1-for-10 from 3-point range as Vick failed to get one off in 12 minutes. His replacement in the starting lineup, sophomore guard Marcus Garrett, made KU’s only shot from beyond the arc in the first 20 minutes.

The Terriers finally reached a point where they couldn’t sustain their defensive success around the midway point of the second half, however, as the Jayhawks began to pull away, with Devon Dotson, Dedric Lawson and Quentin Grimes carrying the offense.

KU’s ridiculous 27-0 run helped the home team finish 49.2 percent from the field — even though KU never got going from downtown (3-for-23 on 3-pointers).

KU struggled much of the first 30 minutes or so to finish stops with defensive boards. The Terriers secured 19 offensive rebounds and scored 12 second-chance points in defeat.

The Jayhawks’ defense began to carry them in the second half, though, as they made a ridiculous run that put Wofford away.

Wofford shot 19.4 percent from the floor in the second half and finished 5-for-26 on 3-pointers in the loss.

KU’s junior 7-footer, Udoka Azubuike hurt his ankle while contesting a shot with a little less that 12 minutes left in the first half.

David McCormack came in for Azubuike, who did not return, with KU up 13-12 and scored. four straight points

The crowd started to come alive in the second half when Dedric Lawson (20 points, eight rebounds) became a ball-handling big. First Lawson wen coast-to-coast off a defensive rebound for a layup, putting him in double figures with 10 points.

Then Lawson handled off a steal, throwing ahead to Garrett, who stayed in attack mode to drive and dish to Dotson for a successful 3-pointer in the right corner that pushed KU’s lead to 38-32.

Freshman point guard Dotson continued to be the engine the KU offense needed.

Dotson’s steal and lob to Quentin Grimes on the fastbreak with less than 9:00 to go in the second half gave KU a 53-41 advantage, which felt like way more than 12 points the way the game was going at that juncture.

Grimes’ transition basket seemed to get him going, too, and he finished with 14 points on 6-for-10 shooting.

Even without scoring, K.J. Lawson made an immediate impact off the bench in the first half.

The sophomore Lawson brother was responsible for three of KU’s first four assists and his steal near the midway point of the first half led to a fast-break layup for Dotson.

McCormack, too, came in ready to provide energy if nothing else in a brief five minutes of action. At times he was too sped up for his own good. But the freshman big man from Oak Hill Academy scored four quick points when he entered for Azubuike.

Vick wasn’t much of a sixth man, providing no points and three rebounds in 22 minutes.

Charlie Moore shot 2-for-8, and no assists and scored four points.