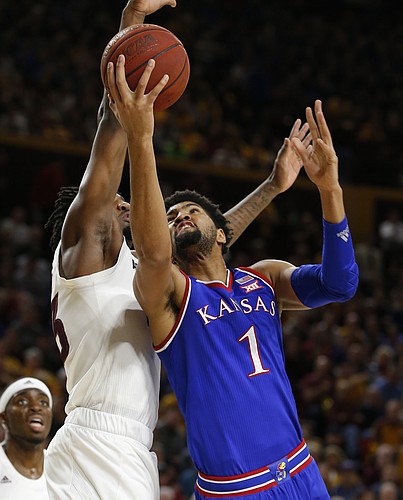 Quick grades for five aspects of the Kansas basketball team’s 80-76 loss at Arizona State on Saturday night in Tempe, Ariz.

A chunk of those high-percentage looks came in transition, as KU outscored the Sun Devils 8-0 in fast break points in the first half, with the help of a Lagerald Vick 3-pointer, a Devon Dotson layup off a steal and even a Dedric Lawson 3-pointer from the right wing.

Overall, KU only shot 43.2 percent from the field before intermission, but because the Jayhawks so often found quality attempts, they never got in a funk or had to stress.

In the second half, though, KU opened 1-for-8 from 3-point range, and with ASU doing a relatively better job defending Lawson, KU’s offense went through spurts of ineffectiveness and they ended up turning the ball over 10 times in the final 20 minutes while shooting 39.3% from the field in the second half.

KU finished with 16 turnovers and 13 assists as a team.

The visitors weren’t so fortunate in the second half. ASU finally began scoring in the paint and in transition, allowing the upset-minded Sun Devils to cut into KU’s lead.

The Jayhawks’ four-guard lineup, which almost always lacks a rim protector of any kind, tried to survive more than anything in the second half as the Sun Devils rallied for a victory by shooting 53.1% from the floor after halftime.

A masterful first half performance from Dedric Lawson (18 points, 8 rebounds) allowed KU to head to the locker room at halftime up 39-31.

The No. 1-ranked Jayhawks only led 24-23 when Lawson began taking over in the final 10 minutes before halftime.

Lawson produced 13 of KU’s final 15 points of the first half, scoring inside the paint and out.

KU’s potential All-American shot 12-for-15 and once again finished with a double-double: 30 points and 14 rebounds.

As usual, KU didn’t get much out of its other bigs.

Freshman point guard Devon Dotson came through with a solid start to his first college road game, at one point spinning in the open floor off a steal, then transforming briefly into a blur before finishing with a tough, contested layup for a 32-24 KU lead.

By the end of the night, Dotson led KU with 5 assists and scored 12 points.

Fellow freshman guard Quentin Grimes, though he missed his first three 3-point looks, wasn’t bad in the first half, either. Grimes was up to 6 points in the game’s first 9 minutes, at one point taking the ball to the rim off a ball screen from Mitch Lightfoot, then hanging and scooping in a layup, with the crowd on its feet trying its best to rattle KU.

Grimes wasn’t exactly flawless in the second half (it seems a game doesn’t go by without him getting beat backdoor on defense at some point), but he helped KU survive a stretch with Lawson on the bench due to foul trouble. Grimes not only scored on a drive for a layup but also set up Vick for a layup. Grimes totaled 8 points and 3 assists.

Lagerald Vick went 2-for-5 from 3-point range in the first half and finished 3-for-11 from deep. The senior guard scored 14 points. KU was only up three when Vick drained a 3 on the right wing, drew a foul and hit a free throw for a 4-point play at the 4:58 mark of the second half.

Marcus Garrett, who air-balled a good look at a 3-pointer in the second half, shot 0-for-5 from the floor and scored 7 points in 22 minutes.

David McCormack was active early, grabbing an offensive rebound and taking it to the rim for a layup when first called upon off the bench. It proved to be the only basket by a KU substitute in the first half.

Although Lightfoot made a bad turnover on an outlet pass off a defensive rebound in the second half, the junior quickly made up for it by swatting De’Quon Lake’s ensuing dunk attempt.

I give the defense a D with 49 second half points, the bench a D, the backcourt a D+ with only Dotson saving it from a D- (considering the hype and quality of the guards), the Frontcourt a C without D Lawson an F, nothing from Lightfoot, K Lawson and 1 bucket from McCormack. The guard play has got to improve! It is terrible!

can we give the refs an F?