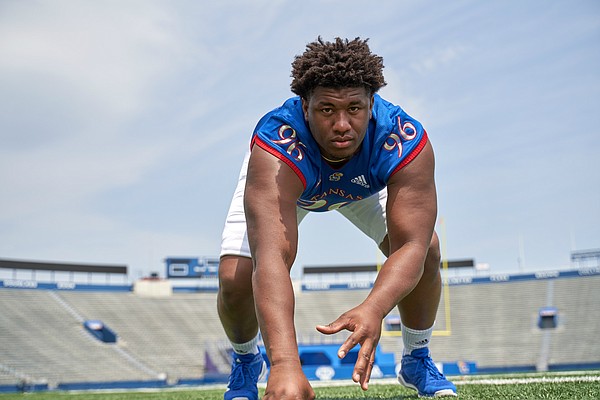 Now, with Dorance Armstrong Jr. playing in the NFL with Dallas, instead of next to Wise, even more eyes will be on KU’s oldest, strongest and most versatile interior lineman. That means more game plans focused on stopping him and even more Big 12 offensive linemen aiming to outshine him one-on-one.

But if anyone on KU’s roster can handle that type of spotlight it’s Wise.

Plus, he’s not so focused on individual accolades and impressing NFL scouts with his own play that he overlooks how much help he will need from his teammates.

“He really has taken this team by storm,” fellow redshirt senior Joe Dineen said, while praising Wise for how hard he worked in the offseason. “He’s a great leader. The thing that’s cool about him is he’s not just content with being great himself. He gets other people around him really good, as well. So he’s got that D-line unit rolling.”

The multitalented Wise possesses too much ability to just line up over a center or guard, too. In the past, when possible, KU has moved him around at the line of scrimmage to find mismatches and opportunities to deploy Wise as a pass-rusher.

Don’t be surprised if Wise does more of that in his final season at KU. He thinks he’ll be even better in those situations, as well, having reviewed in-game footage of what worked and what didn’t.

With 35 appearances and 30 college starts behind him, Wise plans on his last season with the Jayhawks being his best. And he has lessons fueling his approach: “Obviously how to play it even better,” he said. “How to be more effective, how to be more efficient in all those positions.”

— Check out the rest of the MVP countdown at Tom Keegan’s Lunch Break blog: Nos. 6-25