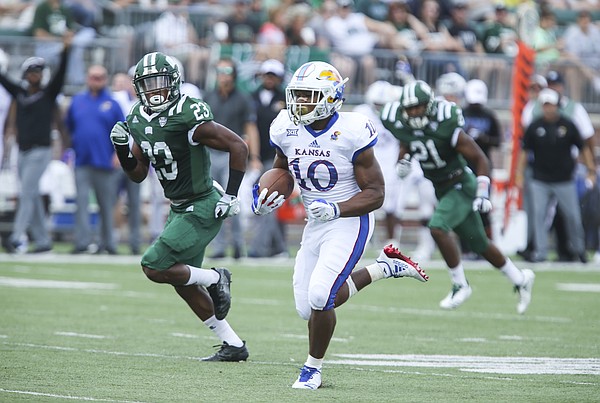 Earlier this week, Journal-World sports editor Tom Keegan officially made his win/loss prediction for the 2018 Kansas football team, picking the Jayhawks to finish David Beaty's fourth season with a 3-9 record. Clearly, that's not the only possibility for the Jayhawks, who, with a veteran group mixed with some new faces, could finish with more or certainly even fewer victories than the three Keegan's predicting. That's where the rest of us come in. In the days leading up to KU’s opener, we'll look at three more possible win totals for the 2018 Kansas football team, which opens the regular season at 6 p.m. Saturday night at home against Nicholls.

Let’s say you’re the super-positive type. A person who looks at a 50-percent filled glass of your favorite beverage and thinks, “Man, there is so much drink left! How will I ever finish it? This is going to be a terrific day.” Well, then this is the Kansas football season outlook case for you.

It would take an abundance of factors playing out favorably for the Jayhawks over the next three months, but if you’re convinced that’s possible you could probably talk yourself into KU winning at least four games for the first time since 2009.

The most talented and experienced players on the roster, Daniel Wise, Joe Dineen and Steven Sims Jr., want to finish their careers by delivering a breakthrough season for the program. That’s not a bad place to start, because they are leaders and will have high standards that they expect the rest of their teammates to meet.

In terms of what happens on Saturdays during actual competition, though, the first thing KU needs is for its revamped offensive line to play as well as coaches think it can. If newcomers in center Alex Fontana, right guard Dwayne Wallace and right tackle Kevin Feder jell and produce with left tackle Hakeem Adeniji and left guard Andru Tovi, then the offense could actually build some momentum in the weeks to come instead of regressing the way it did in 2017, following KU’s season-opening win.

If the O-line becomes a strength instead of a weakness, suddenly offensive coordinator Doug Meacham doesn’t have to ask as much out of Peyton Bender at quarterback, and the offense can ride running backs Khalil Herbert, Dom Williams and Pooka Williams, while mixing in throws to Sims and KU’s other receivers, as opposed to hoping quick hits and bubble screens work out.

An effective run-based offense would obviously benefit a defense that returns the majority of its starters from a year ago, allowing them to rest instead of playing a full series, seeing KU’s offense go three and out and then getting right back on the field.

Let’s say all of this goes according to plan. Then it’s not unreasonable to expect KU to win its two nonconference home games in September against Nicholls State and Rutgers.

And now it doesn’t become crazy to think the Jayhawks could end the program’s longstanding miserable road losing streak at 46 games by winning in Week 2 at Central Michigan — a team picked in the preseason media poll to finish fifth out of six teams in the MAC West Division.

In this utopian September KU finds itself one victory away from its best post-Mark Mangino season. Could a newly confident group of Jayhawks head to Baylor in Week 4 and show no signs of being the same team that failed to score a TD against the Bears in Lawrence in 2017?

Could one of the Big 12 visitors to Kansas David Booth Memorial Stadium — Oklahoma State, TCU, Iowa State or Texas — overlook the Jayhawks? What if one of those teams suffers through a turnover-heavy, mistake-filled game, as well, allowing KU to eke out a win like it did against the Longhorns in 2016?

A viewpoint originating from a pie in the sky gets Kansas football to a much better place in 2018.

In reality, even a 4-8 mark would be rather remarkable for KU, given how low the program has been for so long. Throw in the fact that 4 victories in 2018 would surpass head coach David Beaty’s win total from his first 36 games as head coach and that record actually looks like progress.

Officially, I’m guessing Kansas will be more competitive this fall than it has been at any point during Beaty’s first three seasons. But I’m also guessing the Jayhawks finish 3-9.

• Why the Jayhawks could win only 1 game — or none

• The case for a 2-win Kansas football season

I have us at 5 wins for the year

When Beaty set the bar at 6 wins last year, and has made 4 wins a positive message this year, it seems like we have been oversold since Beaty has arrived. Four I think has to have 3 non-conference wins and a surprising win in conference. Four wins doesn't save Beaty's job though, neither does 5.

So you are saying Long is going to fire a guy who has won 5 games after the seasons this school has endured in 10, 11, 12, 13, 14, 15, 16, 17? Think about what you are saying think about what you are suggesting he will do. Fire a guy who has built a team from the ground up to a 5 win team in a league where he has to play a round robin against 9 teams all considered to be better than he is. I think Long could be putting himself in a real difficult position by firing a guy generally respected by all who know him when he is on the cusp of bringing a moribund program completely back to life. Wonder what the attendance increases will be if we win 5 games. Probably very noticeable, particularly in the coffers compared to preseason expectations. Might be hard to try to upset that applecart.

Yes I am saying that.

I don't think we are on the cusp of greatness.

Couldn't disagree more, Robert. The time to do that PRIOR to the season has already passed. Right, fire the HC 1-2 days before opening kickoff. Genius move...

My prediction, the team can win 3 maybe 4 buy only if KU can stay healthy and other teams have a rash of injuries. Baylor is down but they creamed us last year same with TT. Maybe as Benton said a team might over look us as Texas did a few years ago. Maybe OK and OKst can't over come losing their qbs to the draft and we get lucky. Wins are great but if it's 21-0 at the end of the 1st qtr like last year in most games l don't know what the answer is. Except Beaty needs to go.

I am a glass half empty type of guy and will wait to see how they perform tomorrow night. It is always fun to speculate before a game is played (although OSU looked good last night) but it might be tough to find a Big 12 win. There is the outside chance that one of the Big 12 teams will take KU for granted and have an off game (e.g. TCU a couple of times came away with a close win in Lawrence). Nevertheless to get to even 3 wins KU will need to finally win on the road. Here is hoping for a dominant start to the season.

OLine play will determine how many wins KU has this year. Good OLine play could get KU to the 4-5 win mark and make at least a reasonable case for giving Beaty year 5 on the condition of bowl game or fired in 2019.

Average to bad OLine play gets anywhere from 0-3 wins and a new head coach in 2019 for KU.

I predicted 4 wins for Kansas. I'm the King of Wishful Thinking.

What You Won't Do for Love by Go West - Topic

I'm not optimistic, but I'm a KU fan and alum. So I'm going to do everything I can to support my team. I'll be at the game tomorrow, and if I'm not hoarse by the end of it, I've done something wrong.

I'm there to cheer on my team. Our team. And enjoy what I feel is the most beautiful setting in the country for college football. Regardless of who the coach is, I can't wait to experience what we had in the '70s when I was in school. We weren't always good, but the stadium was packed. The Hill was packed. For the entire game. No one left at halftime. If I couldn't make the game, I could hear the cheers all the way to the southwest end of campus where I lived.

Let's get us back to where we belong. See you tomorrow.

4 wins? Kids don't do drugs and stay in school..

if KU comes out flat on saturday, they can forget winning a single game..in year 4 we shouldnt be expecting 4 wins...in 1990 Bill Snyder took a KSU team that was 1-10 the previous year and won 5 games in his 2nd season..by year 4 they won 9 games, won a bowl game and were ranked in the top 25..im sorry but if KU only has 3-4 wins this season, Beatty needs to be gone..it shouldnt take 4 years to reach 3 wins..I know we arent a FB school but we gotta set the bar higher than 3-4 wins...UCF was 0-12 in 2015..then we saw Scott Frost come in and take that same 0-12 team to a 6-7 record in his 1st season and a bowl game then 13-0 last year with a bowl win and top 10 finish..Beaty walked into a bad situation..but by year 3 we should have seen progress...we didnt

I still believe KU will win the two non-conference home games and that's it.