The case for Miles Kendrick as KU's starting QB 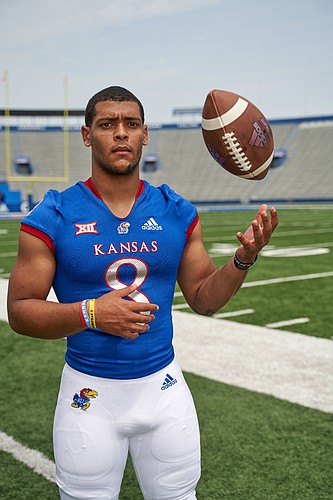 At some point between now and the season opener, Kansas football coaches will decide upon a starting quarterback.

Maybe tomorrow. Perhaps the night before the Jayhawks’ Sept. 1 debut. Or, conceivably, they already have identified the man for the job and they’re keeping it under wraps.

Whenever that verdict materializes or goes public, it shouldn’t surprise anyone if newcomer Miles Kendrick emerges as the No. 1 QB.

The three-man competition, which began in full when Kendrick joined KU as a sophomore transfer from College of San Mateo (Calif.) before the spring semester, might have been prolonged by the team’s inability to scrimmage in April, due to the lack of healthy bodies available on the offensive line.

No such issues exist anymore for Kansas, and the QB who meshes best with the first-team linemen, receivers and backs during preseason practices will win the job.

Offensive coordinator and quarterbacks coach Doug Meacham, with the help of defensive line coach Jesse Williams, found Kendrick out in California by “turning over some rocks” in a state with 70-plus junior colleges, late last year. When Meacham examines Kendrick’s development since joining KU, he finds plenty of reasons for encouragement.

Some football players don’t have that type of dedication in them. They need to break up the monotony of football by going out and enjoying themselves. Kendrick, though?

Kendrick’s penchant for putting in extra hours won’t only win the favor of coaches, it also makes him that much more prepared to excel during 11-on-11 situations at camp. Even if he’s not the unequivocal best passer on the roster and lacks the Big 12 experience of 2017 starters Peyton Bender and Carter Stanley, Kendrick has taken the mental reps necessary to make up ground.

“When you know a guy’s like that,” Meacham said, “and they make a mistake, you know it’s not because of a lack of preparation. He just may have got fooled or made a bad throw or something like that. It’s not because he didn’t have the study or the prep. He’s a gym rat, that guy.”

Mastering the playbook alone, of course, isn’t enough to secure the starting job. At KU’s closed practices, Kendrick will have to continue showing the traits that made him an appealing addition in the first place. And while Kendrick’s numbers at San Mateo — 1,889 passing yards, 18 touchdowns and nine picks, while rushing for 417 yards and five TDs in nine starts — exhibit his potential as a dual-threat QB, Meacham didn’t put much stock in the statistics, good or bad.

“I don’t think I really look at their stats,” the second-year coordinator said of junior college prospects. “I just look at the kind of kid they are, measurables, potential and all that kind of stuff. I don’t think there’s a statistic that makes you go, ‘He rushed for a thousand yards. Let’s recruit him.’”

It was another quality of Kendrick’s that drew Meacham’s attention.

“He knows how to win,” the QB coach said. “That’s a big thing. You want to look at something? Like with your quarterback, does their team win? The teams he’s been on, they win. That’s a good sign.”

In a wing-T, rush-heavy offense at Valley Christian High, in San Jose, Calif., Kendrick was co-NorCal Quarterback of the Year as a senior. His team went 13-2 and was state runner-up. At San Mateo in 2017, the coaching staff figured Kendrick wouldn’t even play as a freshman. But the now 5-foot-10, 200-pound QB became the starter by Week 4. San Mateo finished 11-2, with one loss coming in the California Community College Athletic Association title game.

The KU offense needs a reboot. What better way to execute that than with a new QB?

It will only help Kendrick’s case if the Air Raid scheme the Jayhawks never made work in David Beaty’s first three seasons has been scrapped for a modified version focused on incorporating talented running backs Khalil Herbert, Dom Williams and Pooka Williams.

Already experienced within offenses that successfully ran the ball and gave their defenses time to recover on the sidelines, Kendrick would slide in comfortably in a revamped offense.

And KU’s coaches have extra incentives to switch up their offensive philosophy. They are quietly bullish on their upgraded offensive line, with the additions of transfers Alex Fontana (Houston), Dwayne Wallace (Cal) and Kevin Feder (Ohio State), as well as Api Mane and Adagio Lopeti (San Mateo). A bigger, older, stronger O-line should make it easier to establish a rushing attack.

Plus, they understand the need to pull off something remarkable this fall. Another 1-11 or 2-10 season likely won’t give new KU athletic director Jeff Long much incentive to keep Beaty and his staff in place.

A stylistic overhaul matched with a QB who is both meticulous and athletic would be a good starting point for a program and staff in need of a turnaround season.

The stylistic overhaul seems to be what we need. Otherwise, it's still a crap-shoot whether our new OL can protect the same passers whom I like, but who failed to win games last year.

A rushing focused offense could be the ticket.

Bender can sling it, but he's timid and needs a good OL to help him. Stanley is tough and can escape the pocket, but his accuracy isn't ideal. Miles is tough and he can run, keeping the defense honest, but his accuracy has been a bit of an issue--at least from what I've heard in previous practices. But at the end of the day, I would go with Miles.

Absolutely, let's see what Kendrick can do in game situations.

I think we should also be looking at the fact that of the 3 QBs, Kendrick is the one that needs experience at this level. What better way to get his feet wet than to start him out in early games when the competition level is lower. If he works out, ride him to the finish. If not, you've got veteran backups. If you don't start with Kendrick, however, I think he's more limited as an option. You don't want someone with zero experience at this level going in against OU or WV.

I also like the idea of his athleticism as a weapon adding another dimension to the offense.

Beaty has to win the first three games else he won't see OU or WV...so would you go with someone that needs experience at this level, or someone that has played at this level? Bender beat a DII school, and if the line is better, he will be more accurate than either of the other two based on statistics provided by the coaching staff. If the OL doesn't hold up, you have to go with a running option available. Of course that eliminates Bender; however, now you have to evaluate who can escape and still throw, early indicators were that Kendrick was struggling.

A legitimate response to Joe. However, Beaty has more than hinted at an emphasis on running this year.

It's a tough call on the QB.

Whether its OU or WV or ISU or OSU, it's still the same point: the early games are going to be easier than Big 12 competition. So if a newcomer is going to adapt, I'm arguing his best adjustment will be made as gradually as possible.

I'm interested in really hearing you, however, on the point of indications that Kendrick struggled when pressured. But there are a couple of questions that might require some homework from you, me, or others. 1., where did you hear this, and 2., is there anything out there that has given an indication of Kendrick's progress one way or the other on ANY weakness of his?

The fact is, I don't think Beaty can develop a QB. Others have gone other places and fared better than how they performed at Kansas. We might as well go with the one who is the most multi-dimensional is my view.

Dumb article. The kid hasn't done a damn thing yet. Again, 1/2 season at non-descript JUCO in CA does NOT make the kid Big XII ready. This is nothing other than a "We don't like Bender or Stanley" article so why not give the new kid the ball. It's clearly not because of anything Kendrick did.

Great article. Guarantee you will take all this back once you see him on the field. Amazing kid

No matter who gets the nod there is a good chance Kendrick will get his chance. I don't remember a season of KU football where the starting QB wasn't pulled in favor of the backup.

Whoa There Big Fella, talking to MB! Benton did not anoint the kid he said there is a case to be made for it based on the fact that no style of offense has worked for the past decade so maybe, just maybe why don't we try this kid and run the ball more and eat the clock more.

I trust Meacham's evaluations a lot more than I trust what is coming out of Beaty's mouth the past two seasons so if he thinks Miles works harder and smarter than the other two guys and has that "it" factor to want to succeed (Like Todd Reesing) then I say go with Meacham's gut. Maybe Meacham is hinting/motivating that one or two of the other QB's are more interested in the total college experience than they are interested in living in the film room and up to their full ride scholarship commitment.

But at this minute no one has tipped their hand as to who will start on Sept 1 which is probably a good thing based on the fact we are playing a team with lots of returning starters if given two weeks to prepare for one style of play might be enough to beat us. I would much rather have them wasting their time preparing for two completely different styles of play.

The LJW has written the same article, or virtually the same, every year only the name of the QB changes from Crist to Heap to Cozart to Willis to Bender to Stanley to Kendrick. The article is always the same. This is why the new guy "X" could or should start or would jump start the offense and the article basically comes down to the new guy isn't the old guy so lets try it.