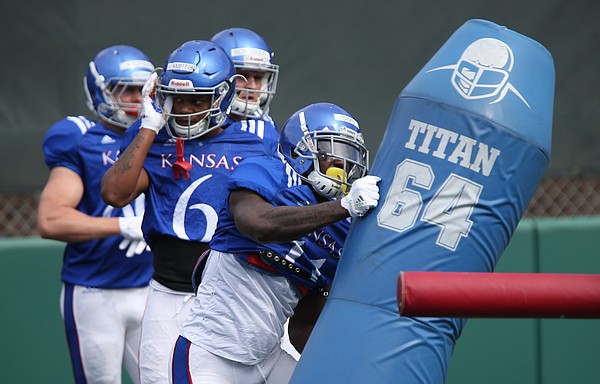 Kansas wide receiver Steven Sims Jr. (11) hits a pad as he runs through a drill during practice on Tuesday, April 17, 2018. by Nick Krug

Tuesday afternoon’s Kansas football practice marked the ninth of the spring for the Jayhawks.

The brief 15-minute window made open to media members provided at least a little bit of insight into some of the more minor details of the off-season work.

Here are a few observations from the open period:

• Kansas, on this day at least, had just a handful of players taking reps at punt returner as most of their teammates went through stretches and warm-ups elsewhere on the practice fields.

• Senior quarterback Peyton Bender worked on his quick kicks before passing drills began. On one attempt the QB punted the ball directly toward the pylon at the front of the end zone, along the right sideline. The ball appeared to head out of bounds in the air, right around the 1- or 2-yard-line, prompting head coach David Beaty to joke with Bender, claiming that specific placement wasn’t what the QB intended when he punted the ball away.

• Redshirt senior kicker Gabriel Rui looked just as accurate as ever, drilling field goals from 37, 42 and 47 yards, connecting on one as Beaty tried to distract him a few yards away with taunts of a pending misfire.

• Sophomore QB Miles Kendrick served as holder on the field goals for Rui. When left-footed sophomore Liam Jones took his reps, junior defensive back Bryce Torneden, who played QB in high school at Free State, came in to hold.

A peek inside spring KU football practice — April 17, 2018 by KUsports.com

Thank you for this update Benton!

Jesus Christ Bryson give it a rest. You’ve somehow managed to make Slant posters even resent you for filling up the front page with your love fest for KUFB.

The football players probably laugh at you behind your back because you’re a male groupie somehow.

I thanked Benton for the update, you attack me... okay.

I couldn’t care less about the opinion of other people on a messaging board. I unlike many have every privilege to say what I want because I go to every length I can to support this team. It’s easy to complain on a messaging board, at home. Not easy to sit through 720 minutes of bad football.

Not going to reveal names at this time because I enjoy being in DB's good graces unlike the staff here at LJW. 4/17/18~Bryson Stricker.

Yes but when Benton etc don't write articles to your liking you rip them. Hump

I stated a fact, the LJW is not in the good graces of KUAD. It's been obvious for awhile now and it isn't just related to football. Bill Self has gone to non-KU affiliated news outlets to release stuff to media. Multiple other coaches have gone to other avenues.

Bridges have been burnt by this kusports.com staff, that is facts.

I'll also never apologize for wanting to stay in the good graces. My bad kevin that you don't get invited to WEF, Alumni and Season Ticket Holder events because you haven't given sh to this school and university. My bad I don't want to awkwardly stand around because nobody will talk to me because i consistently talk sh on the program behind a screen.

You can keep trying to hold that against me, but it just shows how you are just one who complains and doesn't get heard because you're a dime a dozen.

Oh please you overgrown fan boy. How sad. Are you sending out love letters to the prospective coaches after Daddy gets fired so you can kiss their a**es? You think you are making a difference? How many on here make fun of you for your over grown blind love ripping anyone who doesn't stick to your narratives of the program. GO away. What time do you have to mow Daddy's lawn today to stay in his good graces?

lol, I am critical about Beaty in the ways he deserves to be criticized. I just dont turn everything into a hate fest like you bandwagon/fair weather ku fans.

I also realize that I am stuck with what i have unlike all of you who didn't spend a dime here. This isn't professional sports, we can't just get rid of everything at the drop of a hat.

Beaty deserves criticism for his lack of coaching skill on gamedays and preparation but to sit here and berate him about personnel, spring game agenda and other things is asinine because you dont know sh. Other coaches do the same sh with fans wishing someone else was playing. He has his reasons for things, I let it play out. You bi*** about it. Sick dude, nobody cares about your fanhood. At least I get a call every month and emails with updates of the progress of our program.

Go be a fake fan for another school please.

Jesus Bryson are you serious? You think you are more legit because you get a call & emails every month? You are more of a sack then l thought. I feel sorry for you. Hurry Bryson update your browser don't want you to miss an email.

College Athletics is a business to support the University. You play no role in this because you didn't attend, probably don't attend games and if you do, you don't buy season tickets/from university so you aren't helping them.

You are apart of a group that complains on a messaging board, sits at home for games, pays for highway billboards and planes over the stadium while still sitting at home. Congrats, you are a fairweather/bandwagon KU fan that serves no role. The KUAD would lose NOTHING, if you went and became a fan elsewhere.

There are plenty of players to root for. Under a different regime, the fan base would be super-excited to see what Pooka, Charlot, Coe Harris, Herbert & Sims could produce. Under Beaty, we know that the 3-33 chef is cooking the meals so it will be vomit-inducing.

I'm not sure what all this attacking of each other has to do with the information in the article.

Well we all have opinions others might agree and often disagree. Those that attack other posters well guess those are only opinions. Honestly negative reaction always gets the most attention. That is how the ball rolls.