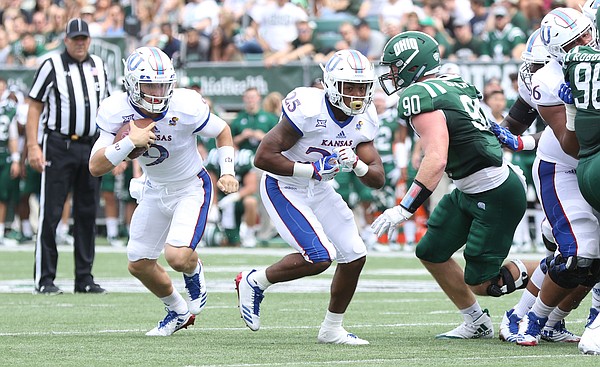 Kansas quarterback Carter Stanley (9) look to cut around the Ohio defense during the second quarter on Saturday, Sept. 16, 2017 at Peden Stadium in Athens, Ohio. by Nick Krug

No, Carter Stanley is not about to supplant Peyton Bender as the Kansas football team’s starting quarterback. But head coach David Beaty said the redshirt sophomore backup will play a factor in KU’s Big 12 opener versus West Virginia.

The Jayhawks used Stanley in a limited capacity at Ohio. Late in the second quarter, on a touchdown drive, the former KU starter made his season debut in a short-yardage scenario.

Stanley, the 6-foot-2, 196-pound QB with more rushing ability and mobility than Bender, was credited with two rushes for just two yards. Still, one short carry came on fourth-and-1, before Bender re-entered and threw a touchdown pass to Chase Harrell.

“I thought what he did do when he went in there was very positive,” Beaty said of Stanley, who started the final three games of 2016 for Kansas. “He did a nice of job really straining to get that first down on that fourth down. No hesitation to him, seeing him going in there and doing that.”

The coach claimed the Jayhawks would like to sub in Stanley in other scenarios moving forward, not just when the first-down marker is a few yards away.

“We actually like him everywhere,” Beaty said. “We’ve got an even bigger package for him this week.”

Ohio’s 18-0 lead, Beaty asserted, kept KU (1-2) from playing Stanley even more in the nonconference finale. While such a declaration could be pure posturing, an attempt to float toward WVU (2-1) another wrinkle for which to prepare, the third-year head coach avowed the Jayhawks’ No. 2 QB will get on the field more often Saturday at Memorial Stadium (11 a.m. kickoff, ESPNU).

“We would have loved to have seen him a little bit more the other day, because of what we have in him, the plan for him, is going to be very helpful for us,” Beaty added.

Whatever Stanley’s role may be this weekend and beyond, his head coach said the QB has been “unbelievable” in his new, less prominent post.

“This guy was the starter here last year. He beat Texas,” Beaty stated. “He came in with a lot of accolades and hopes about coming in and being the starter, and for him to handle himself the way he has, I mean, I cannot be more impressed with him. And he's not satisfied. He wants to play. But he also wants to win. So, very, very impressed with Carter Stanley. He's going to get on the field a lot more for us, no doubt about it.”

Stanley was requested for an interview Tuesday, but according to a KU official, had a class conflict. His teammates, though, say he manages his duties well.

“I feel like he’s handling it really good,” fellow redshirt sophomore Chase Harrell said. “You don’t ever see Carter down or in a bad mood. Carter’s a really good guy for that and he’s always trying to improve, watching film and stuff. You can tell he wants that No. 1 spot. He’s on his way up.”

— PODCAST: KU football’s offense is not the problem

Hope he gets to do more than just rush on 4th downs...

Or was it the fact that neither QB really accomplished much - besides completing passes to the other team.

I agree - Carter Stanley should be the QB. I done with these transfers that failed elsewhere and we think will succeed here. Heaps-Crist-Bender

Speaking of which, How is it Cozart has such a great day against UNM? Is the coaching at Boise St. that much better?

I think Boise St is just better in general.

Was it Smith or Tait that wrote the article last year about how Montell plays well against less opponents - like in practice, but fades badly when the competition heats up. UNM would seem to fall into the lesser opponent category, and most of his current teammates would play in front of his former teammates.

I wanted Stanley to start game 1 and I wouldn't mind if he took over Benders spot, but let's not mix up QB's again. Oddly enough our offense is the best part of this team, although still not that great, but no need to trick yourself into over thinking. If you want Stanley to play more, make him the starter. If he hasn't earned it, then move on until he does.

This is why i believe Stanley needs to play at least 1/4 of the time, and if Bender keeps eating the ball, or throwing interceptions, it should be 50% or 100%.

Somehow we convinced ourselves that the only thing our team needed was a better qb, Hey who qbd the Texas Game? Our team has to improve in how you win games, that is more than just direct player performance. It's a team damn it.

I agree with the comments above. Given that both the QBs are equal (as we were asked to believe before the season), I would prefer having Stanley in as he stretches the possession by using his feet.

Carter Stanley - can extend the plays with his feet and when your offensive line breaks down you need a QB who can do that.

Please coach, we have seen enough washout, transfer, slow footed, slow reaction, bust QB's to last a lifetime. The KU fan base are very experienced in this area of f-ball, we are experts. Play the QB which best fits our personnel. Bench Bender already and get it over with, don't waste another game.