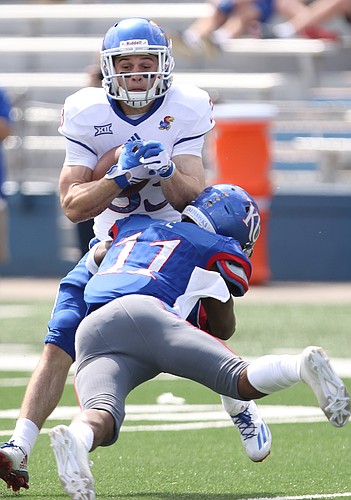 Team Jayhawk running back Ryan Schadler (33) is hit after the catch by Team KU safety Mike Lee (11) during the fourth quarter of the 2017 Spring Game on Saturday, April 15 at Memorial Stadium. by Nick Krug

It’s hard to imagine a moment from a spring football game enduring in the collective memory of those who follow a team for more than a few days — a week at most. Yet, for those who watched Kansas football’s mid-April scrimmage or caught up with it after the fact via social media, it will be difficult to forget the ferocious manner in which Mike Lee played in the secondary.

Lee, a 5-foot-11 safety who made his presence in the program felt as a true freshman in 2016, with a number of savage hits, appeared even more heartless a tackler than imagined during KU’s scrimmage. It was on that stage that he twice leveled teammate Ryan Schadler to break up pass attempts to the receiver.

The Jayhawks began expecting such crunching hits from Lee versus Big 12 foes, but to do that to someone from your own locker room?

Shortly after the exhibition, the faux hard-hitting question had to be asked: Have you apologized to Ryan Schadler?

The truly powerful, up-and-coming sophomore defensive back had an even better answer.

“I apologized to his mother,” Lee revealed. “His mother came after the game, came by me. She was like, ‘Why did you have to hit my son that hard?’ I was like, ‘I wasn’t trying, but Peyton (Bender, KU quarterback) was just setting him up. … I’ve just got to make a play. That’s all I was doing.”

You have to admit, the man is dedicated to his craft. The jolts Lee delivered in an inconsequential scrimmage qualified as long-lasting reminders of his impact as a defensive play-maker and just how serious he is about creeping into the minds of potential receivers — who will know the consequences of their actions, should they try and bring in a pass when Lee lurks nearby.

Schadler’s mother, Donna, just hadn’t considered all of those factors at the time.

It was at that point in Lee’s interview that Schadler had his chance to exact revenge. The junior receiver, done with his media obligations, sneaked up behind the defensive back and grabbed his attacker — but in a display of Schadler’s admiration for Lee’s talents and his respect for a fellow competitor, rather than an angry ambush.

Though still young, Lee is widely respected by his teammates because of his approach to all things football. His commitment made him a starting Big 12 safety when he should have been a senior in high school. And his vicious plays on the ball and/or a quarterback’s intended target turned Lee into an instant fan favorite.

There will be countless more cases of clobbering in Lee’s future. But the blows he administered this spring will live on, because you wouldn’t expect an underclassman who already had made a name for himself to play — or strike — so hard in a glorified practice.

That’s just Mike Lee. He will wallop anyone on a football field wearing a uniform that doesn’t match his own. Because that’s what is asked of him.

“Really, I just run to the ball. If I know I can hit somebody hard, I do it,” Lee said, before grinning to making an addendum. “If I know I can’t, I’ll still do it.”

Mike got burned on one of the TD's though also yes? I seem to recall one of the coaches commenting on that being the next step in his development. To throttle things back just enough to not miss those tackles.