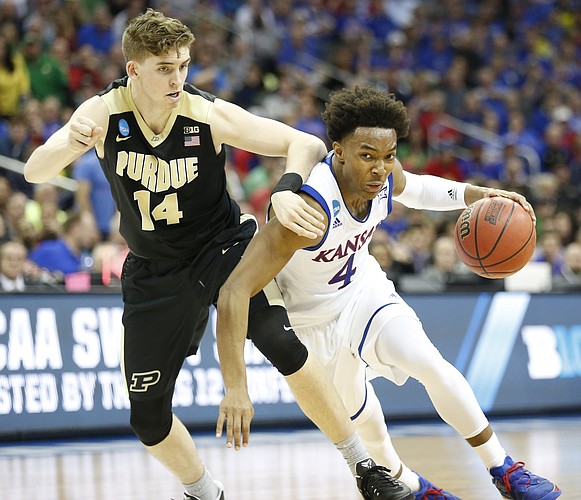 The likelihood of Kansas reaching the 2018 Final Four, in San Antonio, increased significantly when Devonte’ Graham decided to return for his senior season in Lawrence.

And while the offseason strength, conditioning and skill work Graham, a 6-foot-2 guard from Raleigh, N.C., will put in over the next several months is geared toward helping the Jayhawks reach college basketball’s national semifinals for the first time since 2012, for him that training will have as much to do with transforming himself into a player more NBA teams will want to draft.

Graham, who has to be a leading candidate for Big 12 Player of the Year next season, need look no further than the league’s last two P.O.Y-winners for examples of how a strong senior season can improve your draft stock.

Oklahoma’s Buddy Hield projected as a second-round pick before he set the college basketball world on fire as a senior, and eventually became the sixth overall pick in the 2016 NBA Draft. Graham’s KU teammate, Frank Mason III, won’t go that high this coming June, but the tireless lead guard went from not even being considered by NBA types a year ago to a probable late second-round pick.

With more than a year to go before Graham’s draft day, in 2018, his post-junior year situation is closer to Hield’s than Mason’s. So Graham finds himself in a favorable starting point headed into his final season of college basketball.

DraftExpress.com currently ranks Graham as the No. 33 overall pick — third in the second round — in 2018. It’s hard envisioning his stock skyrocketing in duplicate fashion to Hield’s, unless the 22-year-old’s final year at KU is accompanied by a growth spurt. Held measured 6-5 in shoes with a wingspan of 6-9.3, after his days at OU concluded. His body type, coupled with his 25.0 points per game as a senior, made it easier for scouts, coaches and general managers to picture Hield excelling in a league where the world’s tallest, fastest, strongest and most-skilled basketball players make a living.

Not as many will believe the same about Graham, due to his 6-2 height, even if he turns out a Mason-esque senior year filled with 3-point marksmanship and regular scoring outputs of the 20-plus-points variety. But a dominant final run at KU for Graham easily could propel him into the first round, and a guaranteed contract, so that will be one of his numerous goals for the offseason months ahead.

Graham won’t be able to get into the lottery conversation with the likes of the nation’s best incoming freshmen — Missouri’s 6-foot-10 Michael Porter or Arizona’s 7-footer, DeAndre Ayton — or 18-year-old Real Madrid sensation Luka Doncic (6-8). Graham’s objective should be to become the best small guard (let’s say 6-4 or under for the purposes of this exercise) in his draft class.

Here’s a glance at Graham’s competition in that category, according to DraftExpress.com’s 2018 projections: 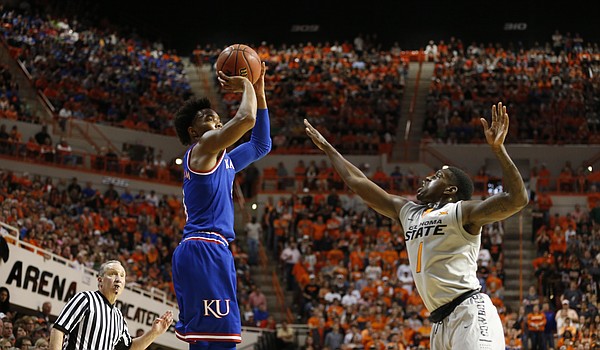 Kansas guard Devonte' Graham (4) pulls up for a three over Oklahoma State guard Jawun Evans (1) during the first half, Saturday, March 4, 2017 at Gallagher-Iba Arena. by Nick Krug

If Graham wants to surpass all those other small guards in his way of becoming a mid-first-round pick next summer, showcasing his 3-point mastery as a senior would be his best bet. Long-range precision is more valued than ever in the NBA, and if you’re already smaller than most of your on-court competitors, owning expertise in some facet of the game is a must.

Kansas will need Graham’s 3-pointers as a weapon next season with Mason’s departure. If Graham is a deadeye shooter as a senior, it will benefit both his college program and his NBA chances.

If he dedicates himself as Frank did in the off-season last year, then he can expect the uptick that will move him to a guaranteed contract.

I love dudes like Graham who are committed to the program.

Graham you're one of my favorites !

There was an article last year about Frank's work ethic and how he tried but wasn't able to get Devonte to work with him. Leaves me anticipating a nice SR year.