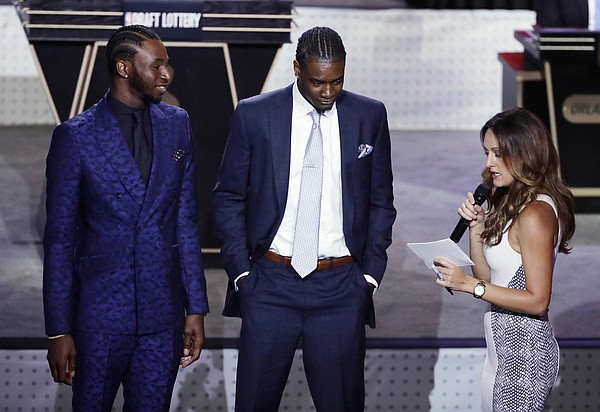 The Ping Pong balls have spoken, and a trio of the NBA’s classic franchises will decide between them which incoming rookies will occupy the top three picks in the 2017 draft.

Thanks to The Association’s annual lottery on Tuesday, one-and-done Kansas star Josh Jackson, a projected top-three pick, has a much better feel for what his future holds. And the versatile 6-foot-8 forward very well could end up the fresh young face in one of the league’s marquee markets.

Odds are Jackson won’t go first overall — that spot long has been associated with Washington point guard Markelle Fultz. But, most likely, Jackson won’t drop any farther than fifth, either. Two to four seem the safest bets for where Jackson lands. But since we’re here we might as well dive into some NBA lottery reaction and look at why each of the top five teams would be interested in kicking the shoes on Jackson to see if they want to add him to their roster.

This would be a fantastic spot for the rookie from KU to begin his professional career. But, at this point in time, it seems as if Boston is more likely to take Fultz or trade the pick for an established all-star.

But one never knows what Celtics president of basketball operations Danny Ainge is thinking. If, by June 22, Ainge were to shock everyone and decide upon taking Jackson, it likely would mean he’s too enamored with the team’s current backcourt rotation of Isaiah Thomas, Avery Bradley, Marcus Smart and Terry Rozier to break it up with Fultz or Lonzo Ball. However, the current contracts for Thomas, Bradley and Smart expire in the summer of 2018, so it would make sense for Boston to take a young potential star guard on a rookie deal and move on from one of the more established members of the backcourt.

Jackson has the personality and game to shine in L.A. However, this spot screams Big Baller Brand. If the Lakers are as crazy about UCLA point guard Lonzo Ball as his father, LaVar, is about the idea of his son joining one of the NBA’s storied franchises, then Jackson has no shot at wearing that classic purple and gold uniform.

Unless, that is, Lakers legend and current president of basketball operations Magic Johnson — long familiar with Jackson’s game due to his ties with his alma mater, Michigan State, and that program’s recruitment of the Detroit native — sees more overall potential in Jackson. L.A. does, after all, already have a couple of young point guards in Jordan Clarkson and D’Angelo Russell. Then again, it wouldn’t be too difficult to part ways with one of them and hand the keys over to Ball, the local prodigy.

This is where things really get interesting for Jackson. Many consider him the third-best prospect in a talented draft class. But the Sixers have a glut of young frontcourt players and no longterm answer in the backcourt. Philadelphia already plans on using 6-10 forward Ben Simmons as its primary ball-handler on offense. Would the organization comprise an even less traditional lineup and give Jackson guard minutes, too? If the Sixers took that route they could put a monstrously long lineup on the floor that few teams could match.

If the 76ers want to address needs instead of taking the best available player on the board, though, they could opt for one of the coveted Kentucky guards, De’Aaron Fox or Malik Monk, instead.

For those who follow KU, it would be intriguing to see Joel Embiid, another No. 3 pick from Kansas, team up with Jackson as part of a young core on course to blossom over the next several years and potentially turn into a force in the Eastern Conference.

If Jackson slipped out of the top three, the Suns would be thrilled to have him. Their two best players at this point are guards Devin Booker and Eric Bledsoe. Adding a two-way wing such as Jackson, who also happens to be an adept passer and fierce finisher in the open floor, would make Phoenix a team to watch out West in the future.

The Suns had the second-best odds of landing a top-three pick before the lottery balls bounced out of their favor. One would think ownership and coaches would do backflips across the Sonoran Desert if Jackson fell into their laps.

Unless they think Duke’s Jayson Tatum is a better answer. [Scoffs inwardly.]

Look up and down the Kings’ roster and you’ll find a who’s who of “why him?” Sacramento will be thrilled with whomever it drafts fifth overall, because that young man instantly becomes the new centerpiece of the franchise. If the Kings know what’s good for them, they are gathering all their good-luck charms, opening doors for strangers, not cutting anyone off in traffic and praying to the basketball gods at all hours from now until draft night, in the hopes that four other franchises pass on Jackson.