Stock watch: Could Josh Jackson break into the top 2 picks of the draft? 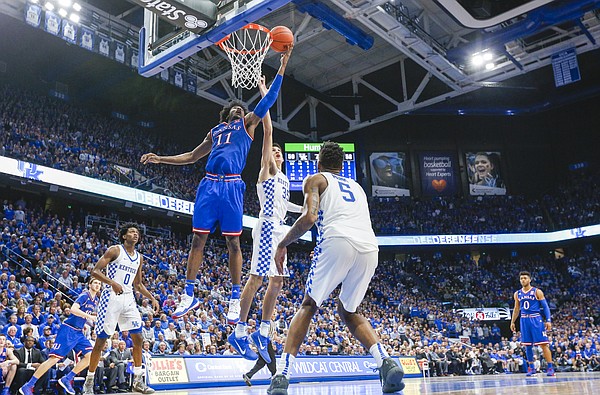 Kansas guard Josh Jackson (11) tips a shot in over Kentucky forward Derek Willis (35) during the second half, Saturday, Jan. 28, 2017 at Rupp Arena in Lexington, Kentucky. by Nick Krug

If you’ve kept up with Josh Jackson’s NBA Draft stock over the course of his one-and-done season at Kansas, you know his name often appears following those of Markelle Fultz and Lonzo Ball on “best available prospect” lists and mock draft scenarios. Sometimes, Jackson even slips out of the top three in the eyes of some evaluators.

And, if you’re like me and wonder why Jackson isn’t more often at least in the conversation as a top-two pick, one new 2017 draft breakdown will leave you nodding your head instead of shaking it.

The Ringer’s NBA Draft Guide ranks the top 60 rookie prospects for the June draft, and only the king of the mocks, 6-foot-4 Washington point guard Fultz, is thought of more highly than Jackson, a versatile 6-8 wing from Kansas who doesn’t have a $495 signature shoe coming out or a father intent on annoying the basketball community at large.

According to analysis from The Rigner’s staff, Jackson could turn into a player as lethal as Tracy McGrady or as versatile as Andre Iguodala. His prospect profile includes a list of his positives and negatives, as well as a telling shot chart, highlighting Jackson’s ability to finish inside (62.5% around the rim) and his favorite area from which to fire behind the arc — the right half of the floor (46.9% on 32 attempts).

Those who watched Jackson play his 35 games in a KU uniform are familiar with the pros and cons he brings to the hardwood. Some of the plus-side attributes referenced at The Ringer include Jackson’s explosiveness, feel for the game, ability as a perimeter/team defender, play-making and rebounding.

None by The Ringer

The aspects that give evaluators pause? Jackson’s “average” 6-10 wingspan, shooting mechanics and tendency to dwell on negative plays, to name a few.

Obviously even the most elite future pros can be dissected to find their flaws. The majority of the league’s top-three picks, year after year, never come close to transcending to the level of LeBron James or Michael Jordan. Jackson’s overall ability on both ends of the floor, along with his instinctive passing and willingness to defend make him a coveted player and a rare rookie who can compete and contribute immediately. It will be interesting to see if his stock fluctuates at all in the weeks ahead, as various teams invite him in for individual workouts, following Tuesday’s draft lottery.

Jackson, who passed on attending the NBA Draft Combine in Chicago, explained that part of his pre-draft strategy recently in an interview with Rebecca Grant.

“Normally, like the top 10 picks don’t go to that,” Jackson said. “There’s no benefit from it. You can only lose. They already know how good you are, and then if you go there and do bad it’s like, ‘Oh, maybe he’s not that good.’ So it just hurts your draft stock.”

During his Q&A with Grant, Jackson also detailed how his upbringing made him a tough player on the court. The 20-year-old millionaire-to-be said he used to battle his mother, Apples Jones, one-on-one.

“It would get so bad that sometimes I would cry that she would block my shot, take the ball from me,” Jackson said of his games as a youth against the former UTEP player, adding he didn’t defeat his mom at basketball until he was about 14 years old.

When Jackson hears his name called early at the 2017 draft, on June 22, you can bet Jones will have tears in her eyes as she watches what her son has accomplished, with her help.

None by Rebecca Grant

#happymothersday #nbadraft @j_josh11 talks about his #love for his mom. How much do u #love your #mom? #RockChalk #jayhawks @KUAthletics 🎀🌸 pic.twitter.com/P1LGeQlAZS

None by Rebecca Grant

Think whoever goes to Boston will have the biggest smile on their face, no matter if that pick is #1 #2 #3 or #4.

lol...what a cool story about his mom blocking his shots. awesome!