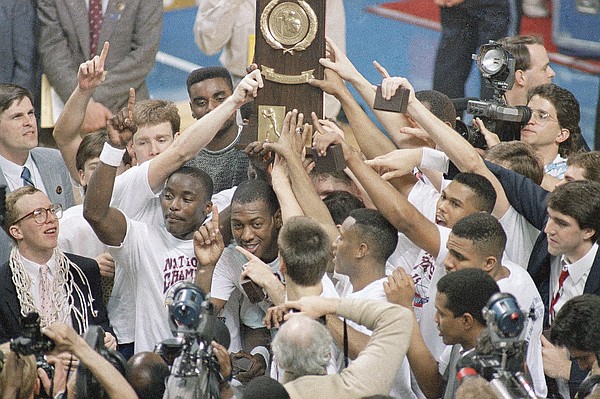 Members of the Kansas Jayhawks basketball team, including Danny Manning hold up their trophy after winning the championship game of the NCAA final four tournament in Kansas City on Monday, April 5, 1988. (AP Photo/Susan Ragan)

No one ever claimed emerging from the madness of March as the NCAA Tournament’s champion was easy. But some paths are more difficult than others.

In Lawrence, the 1988 title captured by “Danny and The Miracles” will live on forever not only because national championships are in their very nature elusive and memorable, but also because Larry Brown and Danny Manning guided KU to that glory as a No. 6 seed. It was one of the more improbable and formidable runs in college basketball lore.

Where does it rank among the most demanding roads to a championship? Well, according to a study from Luke Benz of Yale University’s Undergraduate Sports Analytics Group, KU’s 1988 ascension stands out more than most since the field expanded to 64 teams in 1985.

Per the breakdown, the 2014 Connecticut Huskies are the champions of grueling title runs, after winning it all as a No. 7 seed. And only the classic, Cinderella-esque 1985 Villanova Wildcats (a No. 8 seed) also rank ahed of the ’88 Jayhawks.

Interestingly, the data used to compile the list takes into account more than a given team’s seeding in the year it won. The research involves NCAA Tournament history and the frequencies with which a specific seed beats a team from another particular seed line.

Here’s how the author, Benz, explains it: “For example, since 1985, 5 seeds have beaten 12 seeds 63.5% of the time, meaning a victory for the 5 seed in the game would net a Game Difficulty Rating of 0.365. Finally, I computed the total difficulty of a team’s championship by summing all of its Game Difficulty Ratings en route to the title.”

The analysis emerged in response to current tourney buzz surrounding Gonzaga’s first trip to the Final Four, with many arguing the Zags had far too easy a road to navigate. So the list includes projections for this year’s national semifinalists and where they would rank all-time should they cut down the nets this coming Monday night at University of Phoenix Stadium. As it turns out, Frank Martin’s seventh-seeded South Carolina team, with two more victories, would dethrone 2014 UConn.

Anyway, back to the KU angle of this thought-provoking examination of tournament feats. You might be somewhat surprised to learn KU’s 2008 championship ranks as the fifth-easiest on the list. 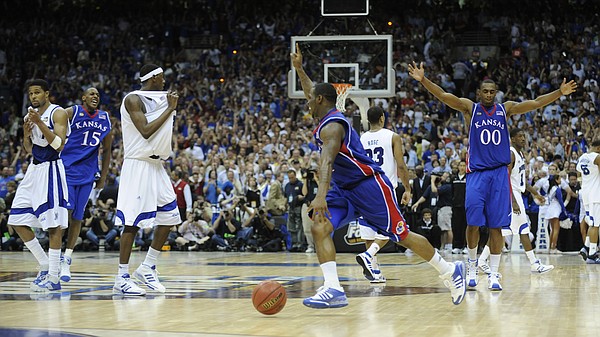 Kansas guard Sherron Collins, center, celebrates with Mario Chalmers (15) and Darrell Arthur (00) after the Jayhawks defeated Memphis in the national championship game on April 7, 2008, in San Antonio. KU and Memphis meet tonight for the first time since the title game. by Thad Allender

The Jayhawks had to beat a pair of No. 1 seeds in North Carolina and Memphis to raise another banner in Allen Fieldhouse, but Bill Self’s Jayhawks beat teams seeded 16th, eighth, 12th and 10th prior to reaching the Final Four.

Studying the list from another angle, some KU teams played a part in other programs’ arduous routes to the NCAA championship. Syracuse and Carmelo Anthony topped Kansas in the 2003 title game, and the Orange just behind the 1988 Jayhawks. Melo’s crowning achievement comes in one spot ahead of Arizona’s 1997 run, when the Wildcats in the Sweet 16 knocked out a two-loss KU team that included future NBA lottery picks Raef LaFrentz and Paul Pierce.

What’s more, Villanova’s 2016 championship, which included an Elite Eight victory over Kansas, ranks as the eighth-most difficult championship to date.