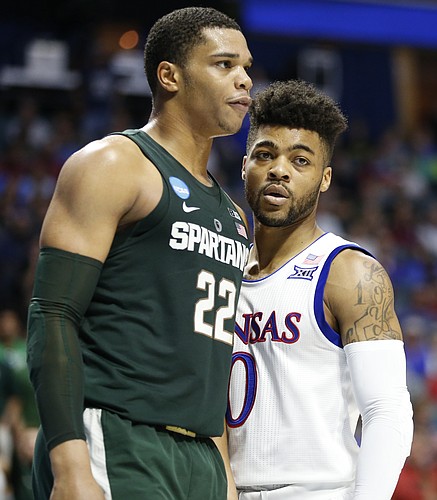 Michigan State forward Miles Bridges (22) and Kansas guard Frank Mason III (0) get up close after a drive by Mason during the first half on Sunday, March 19, 2017 at BOK Center in Tulsa, Okla. by Nick Krug

In an NCAA Tournament clash featuring two of college basketball’s most thriving programs, a fleeting moment during a dead ball situation became as memorable as any highlight-reel jam or crucial late-game basket Sunday, in Tulsa, Okla.

Well on his way to going down as one of those transcendent Kansas basketball stars, senior point guard Frank Mason III drove to the basket for a first-half lay-in like he has umpteen times over the course of the past four seasons. On this particular strike, the 5-foot-11 dynamo left his counterpart, Michigan State guard Tum Tum Nairn, in a heap out of bounds.

In the aftermath of the play, Mason remained near the baseline waiting for the game to resume. That irked Nairn’s freshman teammate, Miles Bridges, who stepped chest-to-chest with Mason to let him know about it.

The 6-foot-7, 230-pound Bridges stared down a good eight inches into Mason’s eyes. KU’s uncompromising, 185-pound leader didn’t as much as blink — almost as if to say, “Bridges, I’m Frank Mason.”

Mason plays at an All-American level nearly every time he steps on the court for Kansas, and that’s one of many reasons the Jayhawks advanced to the Sweet 16 with a 90-70 victory over the Spartans. His bravado, though, as seen when the bigger Bridges tried harassing Mason, gives the Jayhawks an edge, as well.

Kansas senior center Landen Lucas said each of Mason’s teammates know they go to battle with a point guard who won’t show any fear, regardless of his stature.

“We’re all one team, one unit. We’re gonna feed off each other. We fed off of him,” Lucas said, describing how Mason’s interaction with Bridges fired up the Jayhawks.

“My boy Frank is not going for none of that,” Mason’s backcourt mate said. “He’s not intimidated by anybody. He thinks he can guard LeBron, so nobody’s gonna intimidate him.”

Watching the scene from the bench at the time, backup big man Dwight Coleby said Mason’s cohorts knew he wasn’t about to back down.

Lucas revealed the Jayhawks heard plenty of trash talk during their second-round victory. No one ever would accuse Tom Izzo of failing to fully prepare his Michigan State basketball players for any game, let alone one in the postseason. So it must’ve been the Spartans’ idea to try and get in the heads of Mason and his KU teammates. And Bridges’ ploy flatlined.

“I think that’s silly if you’re trying to intimidate Frank,” Lucas said, “because that’s not gonna happen very often. Especially from a freshman. We’ve been through this before. We’ve been through a lot of things and that’s the last thing we’re worried about.”

Bill Self’s Kansas teams often are associated with their toughness, and no one on this year’s roster personifies that trait more than Mason.

“I think we all play with a lot of pride. We all believe in each other, and I think it starts with coach,” Mason said when asked about KU’s grit. “He really gets on to us in practice and he make us compete. And you know, it just carries on to the games. And I’m just proud of the way my teammates played and the great job that my coaches did.”

The image of Mason standing up to Bridges was a lasting one for anyone who saw the game, as well as the Petersburg, Va., native himself. KU’s Wooden Award and Naismith Trophy candidate posted a photo of Bridges’ scare tactic on Instagram after the game, dismissing the notion that someone’s chatter would rattle him.

I see what you did, there.

I was just about to voice my satisfaction with that line. You beat me to the punch Doug.

We about that action, boss.

Thats photo of the chest to chest contact and the attempt to intimidate Mason is a great photo.

Frank looks like he has studied the "Rocky" look before his fights with taller men. Frank says he is about action and his drives into the lane say as much about him.

Bridges: Be careful what you say to Bulldog Mason. His bark will eat you up.