NBA commissioner: One-and-done system 'not working for anyone' 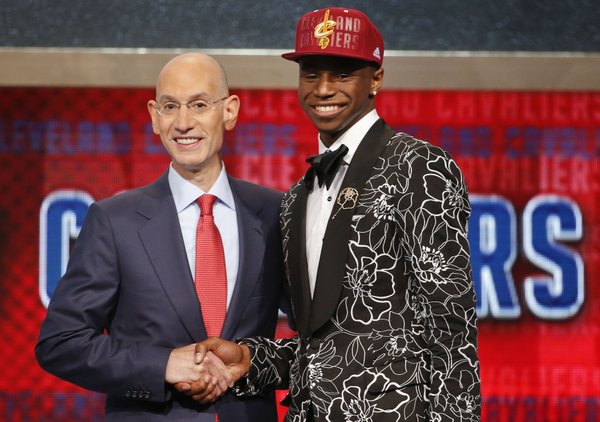 The days of NBA commissioner Adam Silver shaking the hands of one-and-done draftees from Kansas, such as Andrew Wiggins, Kelly Oubre Jr. and Josh Jackson, could be over in the not-too-distant future.

Since 2006, the league has not allowed players to enter the NBA Draft directly out of high school, meaning most of America’s elite basketball prospects end up playing at least one season of college basketball. But Silver said during a press conference at the NBA Finals he — and many others impacted by the current structure — would like to put a “better system” in place.

The topic of the league’s current age requirement — 19 years old and one year removed from high school graduation — came up, Silver pointed out, during the latest collective bargaining negotiations. The NBA’s formal position, Silver stated, is in favor of raising the minimum age to 20. The NBA’s players association wants it lowered to 18, allowing the most coveted rookies to maximize their career earning potential.

The NBA’s owners and players tabled the issue when the sides last got together. Silver said in Oakland, Calif., on Thursday further study on the matter is needed.

“This year the projection is that we're going to have 20 one-and-done players coming, actually being drafted this year. When we first changed the minimum age from 18 to 19, the following year in 2006 we had two one-and-done players,” Silver began. “So my sense is it's not working for anyone. It's not working certainly from the college coaches and athletic directors I hear from. They're not happy with the current system.”

From the NBA’s perspective, its leader said franchises aren’t happy about the present one-and-done format, either. Silver related the feeling among organizations that the youngest incoming rookies aren’t arriving with the training teams expect to see out of top picks.

What’s more, Silver said veteran players have voiced their concerns that rookies often don’t enter the league game-ready, the way some of them did out of college.

“And we're also seeing a dichotomy in terms of the international players,” he added. “They're coming in, when they come in at 19, many of them have been professional for up to three years before they come into the league and have a very different experience than what we're seeing from American players coming through our college programs.”

With all sides apparently unsatisfied, Silver plans to get together with the interested parties — “whether it be the colleges, the, of course, our union, agents, lots of points of view out there, and see if we can come up with a better system,” he said.

Asked for a timetable regarding said age-requirement discussions, the commissioner anticipated they would take place over the course of the coming year.

“To be honest, I'm not standing here today saying I have the perfect solution,” Silver admitted.

The issue is far from resolved, but it appears Bill Self and other top college coaches might one day have either the benefit of keeping top prospects such as Wiggins and Jackson for two seasons — or return to the days of not recruiting the NBA-bound LeBron James and Kobe Bryant types.

holy moly. that will change up kentucky for sure. the transfer system will be affected and recruiting will be shaken to the core. All this happens whilst our buddy bill has a chance to make a difference for the ages. Make it count mister, your words go down in basketball history.

For the one-thousandth time, it's not an NBA issue, it's an NCAA issue. Count all schollies for three years, coaches will quit recruiting OAD's, the NBA will eliminate the age minimum and we, at least, get back to the perception that these are student athletes.

As long as the NCAA continues to whore itself out as the NBA minor league, we'll continue to have the same problems.

Josh Jackson and Andrew Wiggins should have went directly to full-time professions as basketball players. The current system is beyond ridiculous and full of hypocrisy.

While Bill Snyder exercises his power over a kid that he won't play, publicly releases his drug test information and then pretends that it is about Family, we all sit around and pretend that this system works.

In the famous words of Victor Alexander to Johnny Orr: "This sh*t ain't workin' coach".

How can you say it's an NCAA issue, not an NBA issue? The only reason OADs exist is the NBA's age policy.

I agree that something needs to be done with the scholarships, though. However making them count for three years puts the schools at a disadvantage - say in the case of a kid that comes in and blows away expectations and then wants to bolt.

How does Bill Snyder have anything to do with the "system" discussed in this article? Different sports with very different situations.

It would be interesting to do analysis on high school 4 and 5 stars to see how many complete a 4 year program vs. make it past two years in the NBA as a OAD player.

Although it's not a new concept, in my humble opinion, I think he's on to something that rivals the high school OAD recruiting competition. Kevin Young, Jeff Withey and Tarik Black were good gambles, and fun to watch!

If the NBA raises the age limit a year (or even two), National Championships are in Kansas' future. Can you connect the dots?

Ah, but you forget - the Elite Eight is too big of a stage for Bill Self - with or without the NBA age limit.

I bet you stalk your ex gf from the 3rd grade. Get over it moron.

Not until Bill Self wins an Elite Eight game!

You're a little late to the party then...he's won a national championship and lost another title game. Both of those instances required winning elite 8 games. So if that's what it takes to get over it, you're about 9 years late. In other words, get over it or find a new team to cheer for. Bill Self isn't going anywhere and your incessant whining about it isn't going to change anything in that regard. All you're accomplishing is alienating yourself from everyone on here by annoying everyone with your constant whining and negativity.

Come on John, he's never had a girlfriend, that's why he's so angry!

I like the MLB/NCAA rule that allows exceptionally talented individuals to go into the draft and, generally, into the minor leagues for some seasoning. But if the player decides to go into college, he has to commit to at least three years.

Allowing kids to go straight to the NBA certainly isn't going to fix the complaint that "players aren't ready for the NBA when they arrive" and forcing them to stay in College for longer than 1 year isn't going to solve the "let them be professionals when they are capable of doing so" issue so it will be interesting to see how the NBA decides to solve this.

Something resembling the baseball rule would work best. If im correct, baseball players can be drafted outta HS. If they choose to go to college, it's 3 years before they can be drafted again. Lots of kids get drafted outta HS, go to school, then get re-drafted. Im presuming their rights are held by the initial drafting team until that 3rd year. Feel free to correct me if someone knows for sure.

Have kids have the opportunity to be drafted outta HS, but make it two years in college before they can be redrafted.