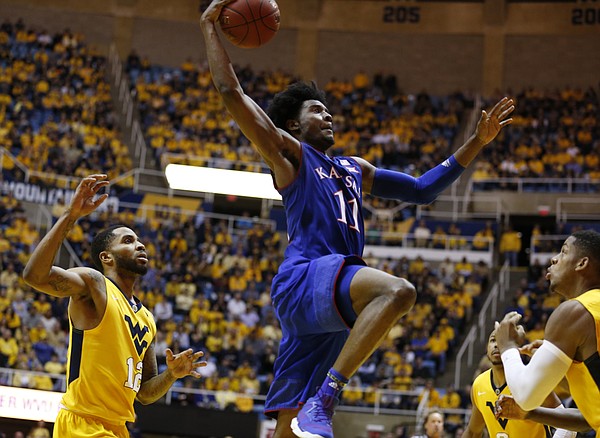 Kansas guard Josh Jackson (11) elevates for a dunk against West Virginia during the second half, Tuesday, Jan. 24, 2017 at WVU Coliseum. by Nick Krug

It turns out the Josh Jackson to Los Angeles buzz was just starting to hum when the one-and-done Kansas standout canceled a workout with Boston the week before the NBA Draft. Less than 24 hours later, Jackson showed up Tuesday at the Lakers’ practice facility for an examination with the Celtics’ historical rival.

A possible draft target for L.A., which owns the No. 2 pick, Jackson told media following the session he was excited about working out for the Lakers for the second time in a six-day span.

“I was all for it. Of course, I’m not gonna tell them no,” Jackson said. “It was just an honor to be here today. I just want to thank the whole organization for having me.”

The 20-year-old wing who displayed his versatility on both ends of the court throughout his lone season with the Jayhawks met with and played in front of Lakers legend and president of basketball operations Magic Johnson, head coach Luke Walton and other members of the organization the previous week, too. That was in Sacramento, with Jackson’s trainer, and more on his terms.

“But today I kind of got out of my comfort zone a little bit working out with their training staff,” Jackson said. “I thought both went pretty good.”

In the mind of the 6-foot-8 prospect from Detroit, he felt in better shape for workout No. 2, and his objective for the on-court job interview was to provide proof that he’s addressed some of his perceived weaknesses as a player, such as 3-point shooting and ball-handling.

“A lot of things people know I can do. I’m athletic, long, lanky,” the 203-pound athlete with a 6-9 3/4 wingspan said, “but I’m just trying to show that I’ve improved since the end of the season at Kansas.”

From the moment the Lakers secured the No. 2 pick via the draft lottery, many assumed the organization would select UCLA point guard Lonzo Ball in that spot — right after the Celtics presumably take Washington guard Markelle Fultz at No. 1. But given the Lakers’ interest in meeting with Jackson a second time (they reportedly are trying to do the same with Ball), the incoming rookie was asked whether his chances of playing for L.A. seem to be improving.

“It was definitely more of a ‘come in, try to impress them.’ And hopefully I impressed them enough,” Jackson replied. “But they can’t look past any guy in this draft because we’re all really, really talented, and I think we all bring a lot to the table.”

Fultz, Jackson, Ball and Kentucky point guard De’Aaron Fox, who worked out for the Lakers before Jackson on Tuesday, all seem to be coveted talents. The rumors and conjecture surrounding who ends up where only will ramp up between now and the June 22 draft.

As much as I'm not really a Lakers fan, I'd love to see them take Josh - although really anyone but Ball, just to see LaVar's head explode.

Being a Celtics fan I want him in Boson, but in reality I want him where he is needed most so he gets the maximum opportunity to grow and develop into his full potential.

Although worthy of #1 or #2, I would like to see him pair up with fellow Jayhawk, Joel Embiid. The 76ers have a chance to become a serious competitor in the East and they clearly have a better young nucleus (if they can avoid more injuries) as compared to the Lakers.

I'm totally with you on that. Philly would be awesome with both former OAD Jayhawks playing together.

Plus maybe they take Frank Mason III as well - someone was speculating on this within the last couple days.

I still can't see Lonzo lasting in the NBA long. I agree with John above, if LA passes on Lonzo....oh wow....Levar will create a black hole in Southern California that will be devastating to the city.