Jalen Rose: Josh Jackson 'most valuable' rookie in draft and worthy of No. 1 pick 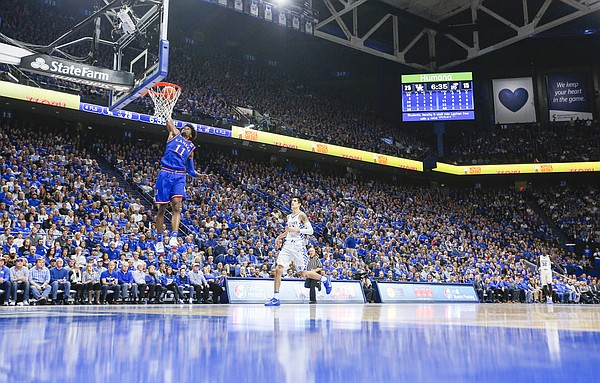 Kansas guard Josh Jackson (11) comes in for a breakaway dunk during the first half, Saturday, Jan. 28, 2017 at Rupp Arena in Lexington, Kentucky. by Nick Krug

Forget Markelle Fultz. Ignore Lonzo Ball. Get out of here with that Jayson Tatum noise. Pay no attention to the De’Aaron Fox buzz.

ESPN NBA analyst Jalen Rose has seen the most valuable incoming rookie. And his name is Josh Jackson.

Rose, a Detroit native like Jackson, brought up the most promising Kansas basketball talent in the draft during a broadcast of the show he co-hosts, “Jalen & Jacoby.” And Rose did so while discussing whether Boston, owner of the No. 1 overall pick, will draft Fultz, the versatile guard who spent his one-and-done season at Washington, or trade the pick in a move to land an established all-star.

“If I’m the Celtics, and they’re drafting for somebody else, don’t be surprised if that team wants them to take (Jackson),” Rose said. “I’m looking at you, Indiana.”

The Pacers, with whom Rose played for six seasons during his NBA career, are rumored to be looking into trade options for all-star forward Paul George before he hits free agency in 2018. Whether Jackson ends up with that franchise or another, Rose proclaimed the 6-foot-8 forward who wowed spectators and scouts alike with the Jayhawks is an NBA rookie to watch out for next season.

“He’s gonna be a player,” Rose said of Jackson, who averaged 16.3 points, 7.4 rebounds and 3.0 assists for KU. “I haven’t really decided who I’m gonna compare him to, but he’s gonna be a lockdown defender that can play multiple positions. He’s an improved jump-shooter. And he has more bounce to the ounce at the hoop.”

Rose wasn’t done there, going on to praise Jackson’s toughness.

“See, that’s one of the things I look for in a player that ain’t a measurable that’s gonna be on the stat sheet,” Rose added. “And so, if I’m picking number one, just in a vacuum, regardless of need, if I’m thinking I’m taking the best player that’s actually who I personally would take first overall.”

According to Rose, the 20-year-old Jackson is the “most valuable” rookie in the 2017 draft class.

“When we’re watching basketball, in November, December, he’s gonna be a guy out there (getting thrown) in for minutes, SC Top 10 just banged on somebody catching a lob,” Rose predicted. “Like that’s gonna be his trajectory. Other players are gonna have terrific situations, hopefully, that they can be productive in. But if he falls in the right spot…”

At DraftExpress.com, Jackson is holding steady as the projected No. 3 pick, for Philadelphia. But all three teams at the top of the board — Boston, the Los Angeles Lakers and the Sixers — have seen their names come up in draft trade rumors. So there’s a chance Jackson might not necessarily end up playing for the Celtics, Lakers or Philly, or even the teams who should hope he drops out of the top three, Phoenix and Sacramento.

Jackson is going to get a big paycheck over the next three seasons, regardless where he goes.

Clearly he has the most up side.

As we have seen in recent drafts, GM's and coaches are too enamored with what could be, instead of what is....... Jackson is the best player on the board when you look at what is. Fultz and Ball are more what could be type players. I have always went with what is, especially when that's a player just as good as anyone else in the draft.

As an aside, the mini-controversies surrounding Josh from Dec./Jan. are literally not being mentioned in the national draft coverage. It was a whole lot of nothing in the big picture.