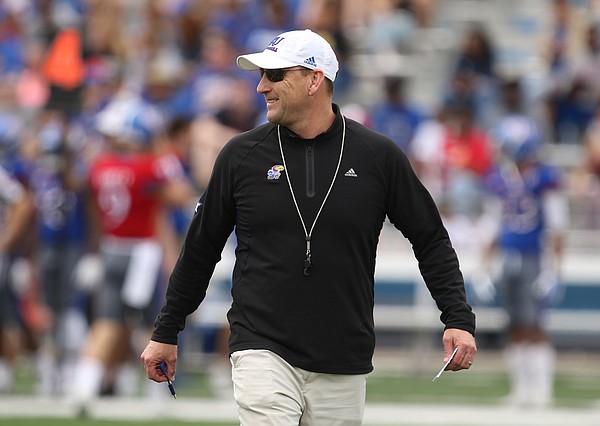 I think the 1 rating is appropriate. Given the fact we are seeing slow, steady progress on and off the field, I can see Beaty not getting much higher than a 2 even if we only win 2 or 3 games this year. I'm not ready to jump on the bandwagon of 6 wins and a bowl birth this season, but 3 or 4 wins is realistic considering the experience and talent of our players (and coaches). Is a backslide possible? Yes, but considering the fact that several teams in the B12 will be going through significant transitions (Baylor, Texas, OU), it's also possible KU sneaks past some opponents with unexpected wins. If that happens, Beaty will stay at a 1 or even move to a 0.

It would be disappointing, no doubt. But given the state of the program, I think it's more realistic than 6-6. I'm perfectly fine with this team surprising me though.

Get those 3 pre-conference wins as K-State has done for years and a 6-6 season is very doable with all the home games at Lawrence.

Snyder was smart by softening his schedule when he only had to play 7 conference games. Mason could have and should have done the same thing. So should have Beaty.

So? The O/U for Beaty should stand at 3.5 using only KU, non-hall-of-fame coaches as a measuring stick. To me, three wins would be a bit of a disappointment. Four wins feels like real progress.

I don't believe that Coach Beaty has much control over the scheduling these past couple of seasons. Remember, Rutgers was scheduled during Weis Tenure.

And, yeah I remember a lot of post mentioning that Weis wouldn't be coaching by the time that trip to New Jersey rolled around. So, let's see what's on the schedule in the future years (with Coach Beaty guiding the ship). Please remember, the NCAA is setting guidelines to get rid of the SEMO type games (and schedule against teams on the FBS Level).

No Benton, a three-win season this year would not be progress; it would be more of the same old crap. A four-win season would be progress. We haven't won four games or more since Mangino's final season.

I think it's been established that the guy is, at the very least, competent. This is a step up from his 2 predecessors, who were clearly INcompetent.

That said, now that we have a guy who is making progress, he needs to be given PLENTY of time to get this thing off the ground. We can't forget who we are from a football standpoint. We are historically one of the weakest programs in power conference college football. We can't have these expectations that we're going to become a league player overnight, ESPECIALLY not in the Big XII.

I'd say that if he can turn us into a .500 team in the next 5 years, that's OUTSTANDING progress and he'll have earned every dollar he's made and probably be deserving of a pay raise.

You all need to temper your expectations. Maybe this will help: