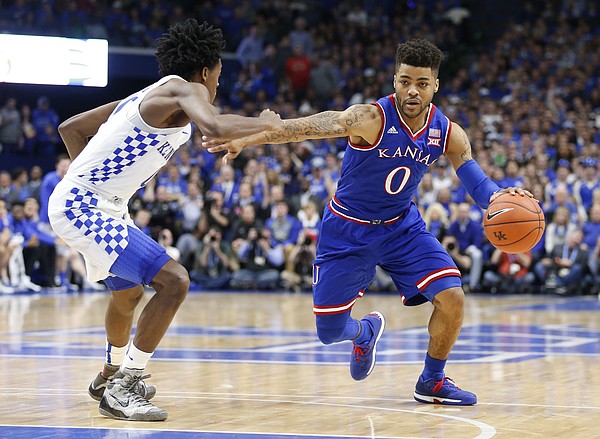 It wasn’t too long ago that Frank Mason and De’Aaron Fox were battling each other in primetime as the college basketball world watched to see whose team would prevail in a blue blood battle between Kansas and Kentucky.

The two dynamic point guards will now get to resume that clash behind the scenes — potentially for years to come — as teammates with the Sacramento Kings.

For two players who only squared off once, the duo knows each other fairly well. Fox, the No. 5 overall pick in this year’s NBA Draft, revealed during a recent interview with Sacramento media that Mason actually hosted the speedy floor general when he visited the University of Kansas as a high school recruit. Fox opted for a starring role at Kentucky, instead, and when he next saw Mason, the senior outdid the freshman, leading the Jayhawks to a 79-73 win at UK’s Rupp Arena.

“We had a good battle in college. I think it was a really good game. And not only with De’Aaron, I’m looking forward to getting out there and competing against everyone,” Mason said of renewing his matchup with Fox at Kings practices, beginning this week, as the two prepare for their Summer League debuts. “As the point guards of the team, we should always want to compete at a high level and make each other better for the franchise, so that’s what we will do.”

Fox, too, told reporters he looked forward to having Mason as a teammate/challenger.

See the rookies in action for the first time in Kings uniforms! 📸 » https://t.co/Kqv0SCQdrl pic.twitter.com/d2BHKwYXDz

When Sacramento first added Fox and Mason (second round, 34th pick overall) through the draft, the two were the only point guards on the roster. Although a veteran pick-up was sure to come, the possibility of Mason taking on back-up point guard duties for a young team in full-on rebuild mode seemed like a real possibility. However, the Kings reportedly agreed to a free-agent deal with vet George Hill, who averaged 16.9 points and 4.2 assists this past year with Utah. Hill is so good he might even allow Sacramento to bring Fox along slowly, in a sixth man role, even though the 19-year-old guard is clearly the new face of the franchise.

Mason will be Sacramento’s No. 3 point guard next season, which isn’t a bad gig. Obviously, Mason would prefer a more involved role because he’s that kind of competitor. But he should get his chances. The Kings, because they are so young (outside of free-agent signings Hill and Zach Randolph) are going to lose a lot of games and be blown out in a decent amount of them in the brutal Western Conference. So Mason figures to, at the very least, get his introduction to the real NBA in the fourth quarters of Kings losses during the 2017-18 season.

But Mason also will move up the depth chart any time Hill or Fox are unavailable. And Hill, now 31, has missed 30-plus games in two of the past three seasons. The Kings have a nice insurance policy in the form of college basketball’s reigning national player of the year.

Beginning Friday at the NBA’s Las Vegas Summer League, Mason will get to show Sacramento’s staff what he’s made of, as he, Fox and many of the Kings’ young big men take on Josh Jackson and Phoenix. Mason told Sacramento media how he plans to complement his new frontcourt teammates.

“Just being a tough guard who gets my teammates involved,” the 23-year-old guard began, “and I feel like I can get them a lot of good touches, lobs, dump-offs to where they can just get easy baskets and finish.”

On a team mostly comprised of players under the age of 25, summer league, practices and every learning opportunity that comes along will be critical for the team’s development. With Fox and Mason in the mix, a downtrodden franchise has two young men capable of resetting the culture.

“I’m looking forward to it,” Fox said of working with Mason. “They drafted two great young point guards and we’re just gonna make each other better every day.”

Go for it, Frank! I'm sure you can achieve whatever you want to, given your talent and dedication.