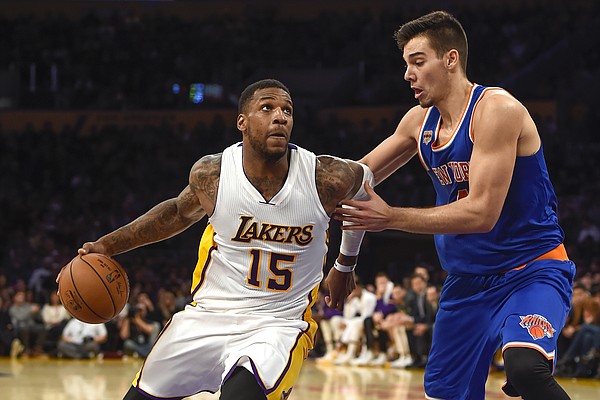 Every NBA free agent in search of a new contract has a wish list of ideal scenarios he would like to fulfill with the help of his new employer. For former Kansas star Thomas Robinson, who already has played for Sacramento, Houston, Portland, Philadelphia, Brooklyn and the Los Angeles Lakers since entering the league in 2012, those cravings include landing a multi-year deal that would keep him with one franchise for more than one season.

In an extensive interview with Alex Kennedy of HoopsHype.com, Robinson said he thinks some stability would be a boon for his professional career.

“I want to be comfortable. I think every player is looking for that. If I have that, I feel like I can open up my game to another level and help a team even more,” said Robinson, who signed with the Lakers before the 2015-16 season, and told Hoops Hype he would like to re-sign with the organization. “I’ve been through a lot since I entered the league. Being in the same place for more than one year – with the same players, the same coaching staff, the same system – would only help me get better. It would allow me to be more comfortable. And if you let me get comfortable, there’s no telling what you’ll get from me.”

With career averages of 4.9 points and 4.8 rebounds in 13.4 minutes a game, the 26-year-old power forward wants to do far more in the NBA than he has previously, and said he promises the team that signs him this offseason won’t be let down.

“I just want a chance,” Robinson said. “I want to show an organization that I’m going to be mature, work well with the coaches, earn their confidence, get playing time and then do the right thing on the court when I get those minutes.”

Although he only played in 48 games for a rebuilding Lakers team in his fifth season, the 6-foot-10 reserve said he enjoyed playing for Luke Walton, because the young coach allowed him to grow and learn from his mistakes.

Robinson made it clear there is a comfort level for him with the Lakers, but Kennedy reported the athletic big also received some free-agent interest from Minnesota (though that might have cooled with the Timberwovles signing veteran Taj Gibson).

In the past several seasons, Robinson wasn’t as effective a scorer as you might expect from a high-energy player who takes most of his shots in the paint. But he converted on a career-best .536 from the floor for the Lakers, outperforming he previous best of .485 two years earlier, when he split time with Portland and Philadelphia.

His defense, meanwhile, hasn’t been at a high enough level to inspire his coaches to play him more. However, one part of Robinson’s game that will translate every time he steps on a court is his rebounding. Looking at his per-36 minutes numbers, Robinson would have averaged 14.3 rebounds a game this past season.

“Given the opportunity, I could easily be among the top-10 rebounders in the league. Easily,” Robinson told Hoops Hype. “Not only am I a better rebounder now than I was back in the day, I know what to do after I get the rebound. My basketball IQ and vision have improved, so now I realize that I don’t need to go up immediately every time I get an offensive rebound or try to start a fast break on my own when I get a defensive rebound.”

Watching Cleveland role player Tristan Thompson, Robinson added, has given him a blueprint to follow in terms of carving a niche and forcing a coach to play him by dominating the glass.

“What people love about him is he’ll get the rebound and then immediately look for one of his shooters or he’ll set up a dribble hand-off. I think that’s where I’ve improved the most – what I do after I grab the rebound,” Robinson said, adding he wants to have an impact similar to Thompson while continuing to mature and improve his all-around game.

Up to this point, Robinson never has spent two full seasons with the same team. That could change if the Lakers re-sign him for the multi-year contract Robinson is seeking. But L.A., which recently waived another former KU big, Tarik Black, currently has four bigs under contract — Brook Lopez, Julius Randle, Larry Nance Jr. and Ivica Zubac. And the Lakers drafted two more in Kyle Kuzma (Round 1, 27th pick) and Thomas Bryant (Round 2, No. 42).

A need for frontcourt depth almost always exists in the NBA. But there’s a chance Robinson might have to relocate yet again to find a team lacking in that area.

— Read much more from Robinson at Hoops Hype: Robinson looking for opportunity, stability

Stay in the league and take the money! It's better than working a regular job.

This guy works so hard, stability would really help him develop faster. I want to see him play in the All-Star game before he's done.

Great article, Benton. Makes me want to root even harder for Thomas to break through into the next level in the NBA. But it sounds as if the Lakers are full at the PF position.