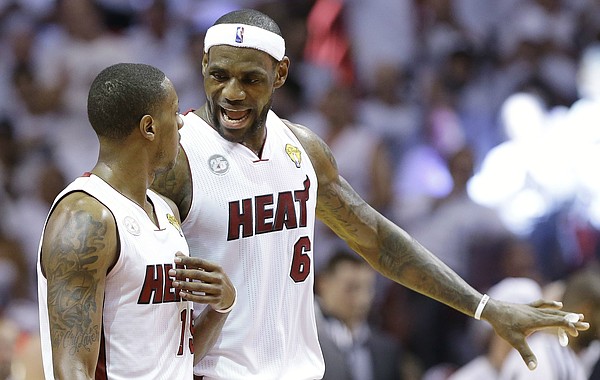 FILE — The Miami Heat's LeBron James (6) speaks with Mario Chalmers (15) during the first half in Game 7 of the NBA basketball championships against the San Antonio Spurs, Thursday, June 20, 2013, in Miami. (AP Photo/Lynne Sladky)

In what is typically the most dormant time of year in the NBA, the league remains abuzz in late July thanks to some off-the-court drama coming from the three-time defending Eastern Conference champions. News came out this past week that Cleveland All-Star guard Kyrie Irving, who helped the Cavaliers win the 2016 NBA championship, asked the organization to trade him.

From there, rumors and speculation exploded — via social media and legitimate news outlets — on a perceived strained relationship between Iriving and four-time league MVP LeBron James.

While there are layers to the story that might not be revealed for months, or even years, many are left asking themselves why someone wouldn’t want to play with James, the greatest player of his generation.

What is James like as a teammate? Someone who knows the answer to that question, former Kansas guard Mario Chalmers, shed some light on the subject during an interview with SiriusXM NBA Radio.

Chalmers, of course, won two NBA titles while playing alongside James in Miami for four seasons. Now a member of the Memphis Grizzlies, the eight-year veteran complimented The King on SiriusXM, but admitted it can be “tough sometimes” to play on the same team as LeBron, due to his dominant presence.

“He’s the best player in the NBA, so it boils down to the coach. Is the coach going to get everybody else involved, or is he gonna let ’Bron decide when he wants to get everybody else involved? So that’s one of the things we were going back-and-forth with in Miami,” Chalmers began. “But as a teammate — he’s a great teammate. I’ve never had any problems. Even when we had that one argument on the court. At the end of the day, we’re still brothers. We were over that after it had already happened, and the media made it more than what it was.”

LeBron James Apologizes to Mario Chalmers after yelling at him (2013.12.18) by Ali Productions

Although Chalmers and James had their differences, the role-playing guard wasn’t about to call James a bad teammate. If Chalmers had to guess, Irving’s desire to abandon a lineup that’s the favorite to reach The Finals for a fourth straight year stems from something other than it being difficult to play with James.

“He’s a great teammate, a great dude,” Chalmers said. “And when you’re a guy like Kyrie, and you’re young and you’re the man, I can see him wanting to be traded to be on his own team. But I don’t think it’s as personal as what everybody is trying to make it seem.”