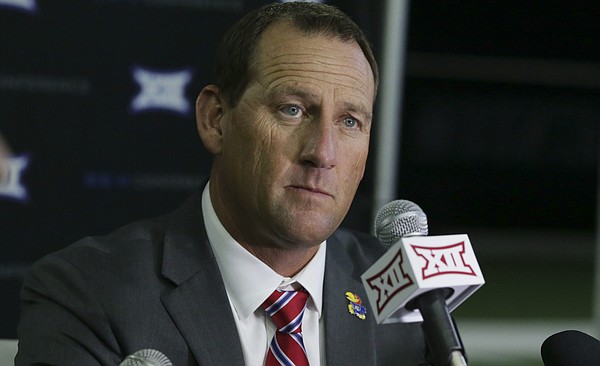 It used to be prep football talents couldn’t sign with their college programs of choice until February. But the NCAA is introducing this year an earlier option, in late December, lasting just 72 hours.

Asked at Big 12 Media Days about how the new early signing period for high school prospects could change the way Beaty and his staff approach the uber-competitive world of recruiting, the third-year Kansas coach had to take a wait-and-see stance.

“I don’t know that we’ll know the answer to that for a couple years,” Beaty admitted Monday at Ford Center, while speaking with a group of reporters. “I’d like to say that the research we’ve done is going to be accurate, but the truth is when you get major rule changes like that it usually takes a few years for all the things to shake out.”

High school football seniors this winter will have the option of signing with a university between Dec. 20-22 — also the first three days of the mid-year signing period for junior college players. If they don’t make their commitments official then, the prospects still can do so on Feb. 7, 2018.

“One of the most interesting things for me,” Beaty said, “is when kids are committed and that first period comes around how many of them actually sign and how many don’t, because if they don’t sign then, they’re not committed.”

KU’s 2018 recruiting class has the potential to be the most significant in program history, thanks to the non-binding verbal commitments Beaty and his staff already have received from five-star New Orleans receiver Devonta Jason and his Landry-Walker High teammate, four-star cornerback Corione Harris.

Jason has stated in previous interviews he is on pace to graduate high school early and enroll at the university of his choice for the 2018 spring semester to get a head start on his college football preparation. So Beaty and associate head coach Tony Hull, who recruited the first five-star commit in program history, might have known Jason’s status by December even if the new signing period had not been implemented. But the recruiting rule change still holds importance for the rest of KU’s targets. Beaty indicated he would like to get as much of the 2018 signing class officially on board as soon as possible.

“Now, they still may sign on that second one,” the coach added, referencing the later February date. “But if there’s a paper available and they don’t sign it, that’ll be very interesting for me to see how many kids actually open their recruiting back up at that point, which I think that there will be some.”

As of Tuesday, Rivals ranked KU’s 2018 class 28th in the nation, thanks to the presence of Jason and Harris. The Jayhawks’ list of commitments currently stands at 13 players, nine of whom have been assessed a three-star ranking.

An oral commitment from a recruit never has provided college coaches with much certainty. Beaty said those in his profession will keep refining their sales pitches and doing all they can to get players signed. Three days in December now provide them with a new wrinkle in those endeavors.

“But for the most part if you do the studies and you look at basically signing trends, the majority of the kids still sign with the guys that they’re committed to and they don’t switch very often,” Beaty added. “I think (switching is) becoming a little more prevalent, but I think that’s where it comes down to coaches and their talent, in terms of how well they continue to recruit. Because make no mistake it’s not done with them there (when players commit).”

While that may be true with some coaches, John, it isn't the case with David Beaty. He very obviously breeds enthusiasm with his personality, and at the age of 46 that isn't exactly a flash in the pan for him. This guy lives and breathes people - he's the perfect recruiter.

He is authentic and has some good authentic people with him. He will do well in recruiting.