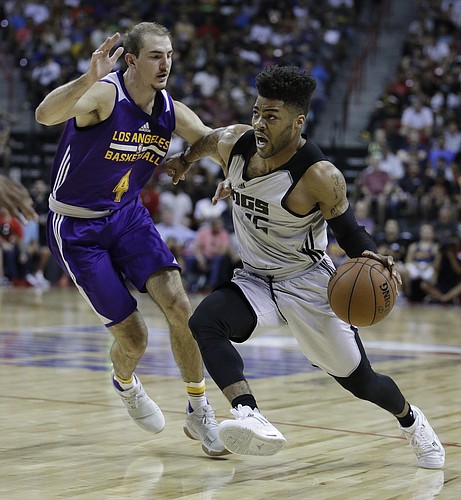 With his team in the midst of a potentially embarrassing drubbing versus an undermanned Los Angeles Lakers squad late Monday night at the NBA’s Las Vegas Summer League, former Kansas All-American Frank Mason III got a chance to outshine some of the event’s stars — the more highly regarded first-round picks who went before him in the June draft.

Sacramento’s No. 5 overall pick, De’Aaron Fox tweaked an ankle in the first half, enabling Mason, the 34th pick, to put on a second-half show. Mason nearly helped the Kings rally from a 28-point deficit against L.A. with a game-high 24 points — scoring 20 in the second half. The backup floor general shot 9-for-13 (2-for-3 on 3-pointers) and contributed six assists, five rebounds and two steals in a 95-92 loss.

Predictably humble, Mason downplayed his big night and the comeback that fell short versus a Lakers lineup which did not include Lonzo Ball, Brandon Ingram, Josh Hart or Kyle Kuzma.

“The goal is always to win,” he told reporters afterward. “I’m happy that my team fought pretty hard to make it interesting, but we didn’t come out with the win, so I’m not really happy.”

While Mason’s assertive approach in the second half resembled his senior season at KU, the point guard credited his coaches’ strategy and teammates for getting him open with screens.

“I was pretty much just driving the ball downhill, creating for my teammates and myself,” said Mason, who went 2-for-9 in his first summer exhibition and 2-for-10 in his second outing, leading up to a breakout performance.

.@FrankMason0 showed out with crafty offense last night! The rookie finished with a game-high 24 PTS with 20 coming in the second half 👀 pic.twitter.com/jDuEvdDOFp

The 23-year-old lead guard said his four years of Kansas experience kicked in at some point, and he was able to make a positive impact for his team and get the Kings back in the game. Not that he ever was overly concerned with his slow start in Las Vegas.

“I just made shots in this game,” said Mason, who is now averaging 11.3 points, 3.3 assists and 4.0 rebounds, while shooting .406 from the floor. “The last two games I had pretty good looks; they just didn’t fall.”

Fox’s minor injury set up Mason with more playing time (24 minutes). Instead of subbing in and out, he got to experience a prolonged stay on the court. While Mason admitted that helped him feel comfortable, he also said, “it’s the NBA. No matter when your number is called you’ve got to be ready.”

Even the summer league is a step up for the former Kansas star, which means a new reality: coming off the bench.

“I think I do a pretty good job of accepting my role and giving whatever the team needs from me,” Mason said of entering the league as a backup. “It’s a different feeling, obviously, from the past three years — starting and playing for a lot of minutes throughout the game — to coming here and just getting limited minutes. But I accept my role, whatever it is, and just give my best effort.”

He didn’t enter his latest summer league game expecting a chance to take over, but Mason did just that given the opportunity. The more looks he gets with the Kings, the more the second-rounder will force others around the NBA to take notice.

Frank Mason feels like a guy who is going to find a way to stick around in the NBA.

None by Tim Bontemps

None by Jason Jones

sorry for the double post -- did not see this article at first.

Frank's latest summer league highlights: https://youtu.be/W5EwJ0dzFFE awesome! (he will be fine in the league)

btw, get past the pre-roll advertisement, then advance to the 25 second mark to avoid an embedded 2nd advertisement on the YT video