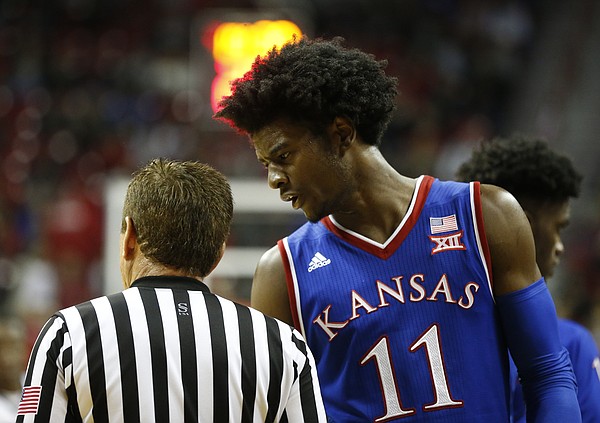 Kansas guard Josh Jackson (11) converses with an official during the second half, Thursday, Dec. 22, 2016 at Thomas & Mack Center in Las Vegas. by Nick Krug

Josh Jackson won’t play college basketball for long, but while he’s doing so at the University of Kansas, part of his on-court education involves learning how to best carry himself when things don’t go his way.

Back in November, during just his second game with the Jayhawks, Jackson picked up his first technical foul as a collegian on a national stage, with KU facing Duke at Madison Square Garden. Jackson slapped the ball away from one of the Blue Devils during a dead ball, earning a “T” that ultimately kept him off the floor in the closing minutes of a tight game, because it counted as one of his five personal fouls.

Jackson, while not always thrilled with officials’ calls in the weeks that followed, avoided another technical foul until Big 12 play began a little more than a week ago. Then the 6-foot-8 wing did enough to inspire officials to whistle at him on a technicality in back-to-back games.

Publicly, KU coach Bill Self defended Jackson for the “T’s” at TCU and against Kansas State, but Self also worried his star freshman might have developed a reputation for needing to get in the final word with referees.

Now that he has played 15 games for KU (14-1 overall, 3-0 Big 12), Jackson was asked following a tech-free outing against Texas Tech whether he thought he has become a marked man with officials and if he thought he needed to change anything about his on-court persona.

“I honestly don’t think so,” said Jackson, known for his affable nature off the court. “I think I have three technical fouls this year and I can honestly say I deserved one (against Duke). But just trying to move on to the next play a little bit — I think I did a good job of that (versus the Red Raiders).”

In fact, early in the first half of the Tech game, Jackson was called for an offensive foul on a drive to the paint, and though his face showed he didn’t agree with the assessment, he didn’t initiate a conversation with an official to sound off on the matter. What’s more, during the next stoppage in play, Jackson calmly approached a referee for an explanation on the charge call.

“Some refs are different. Some give you a technical foul for a lot less than others will,” Jackson said of his early lessons in navigating conversations with college officiating crews. “You’ve just gotta move on to the next play no matter what, because after they make the call you can’t change it anyway.” 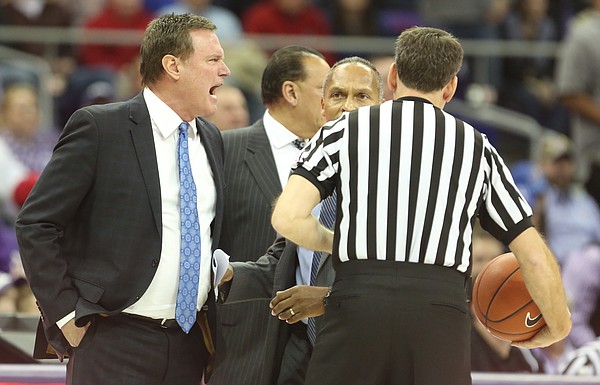 Kansas head coach Bill Self lays into an official after a technical foul was called on Kansas guard Josh Jackson during the second half, Friday, Dec. 30, 2016 at Schollmaier Arena in Fort Worth, Texas. by Nick Krug

There are bound to be far more intense games than KU-TT on the horizon, so there are no guarantees Jackson will finish his one-and-done season without picking up another technical. Still, he appears to be processing the positives and negatives that come with displaying his fiery side during competition.

Jackson certainly won’t let his past indiscretions — perceived or real — change who he is on the court. But, as his coach also pointed out, he’s too massive a talent to allow technical fouls to become a recurring issue.

More lessons for the freshman

It didn’t take Jackson long to find out Big 12 games take on a different level of passion than some of those non-conference undercards KU played in December. An NBA prospect expected to be taken in the first few picks of the draft this coming June, Jackson fouled out of the Jayhawks’ win at TCU, playing just 12 minutes and contributing only four points and two rebounds (both season-lows).

“Guys come out and play a lot harder, especially with Kansas winning the league so many years in a row,” said Jackson, who bounced back with 22 points against K-State and 17 versus Tech, making him the Big 12 Newcomer of the Week. “… There’s a target on our back. Everybody would love to beat us. If you asked any team in this league if they could beat one team, just win one game, I guarantee you they would say us.”

Tuesday night at Oklahoma, the Sooners (6-8, 0-3) will fall into that category. Playing with Kansas on the front of their jerseys and figurative bull’s eyes on their backs might be difficult, but Jackson said he and his teammates don’t mind.

“I think all of us really love a challenge,” he said. “We welcome it and it just really shows us, gives us a chance to see how tough we are and what we really can do.”

Jackson is so easy-going, I can't believe his likable character still costs him a T or two. Maybe I'm not too familiar how these refs get assigned in B12. If games played in AFH, do we get the same refs? Perhaps, you guys can write article about 1 or 2 of these familiar refs here.

There was an article about Josh and his mom this summer that detailed the mentality that his mom taught him to play with. Basically, be a nice guy off the court, but when the ball goes up, this is business and you're out there to win. Based on that background and approach, I'm not too shocked that he's picked up some T's for being vocal or acting out his frustration given the calls he's received, especially given what actually took place in the game leading up to those technicals.

As has been discussed, the foul in the TCU game came from someone that was out of position to make such a call, and was questionable to begin with considering Josh out jumped a smaller defender for a rebound. In the KState game, he was hacked not once but twice down low trying to get a shot off before losing the ball. Given how the game had been called to that point, its understandable that he would be frustrated not getting a call there. Had he approached the ref at the next dead ball and had the conversation like he did during the Tech game, he probably isn't whistled there and they might even be looking for contact down low to our benefit similar to how Self and other coaches work officials to see things during a game.

The good news as the article points out is that he's learning how to adjust and doing so quickly. As we get into the meat of the conference schedule and especially the NCAA tournament, we'll need him on the court as much as possible to achieve what this team has set out to do. Finding the balance to play with fire but not act out will help him this year and in the long run and I think he's well on his way to doing that.

I suppose we should be happy that at least he isn't tripping players...

I noticed an exchange with Higgins after he was called for a foul and held my breath until Higgins started laughing so perhaps he is learning!! Such an impressive young man!!