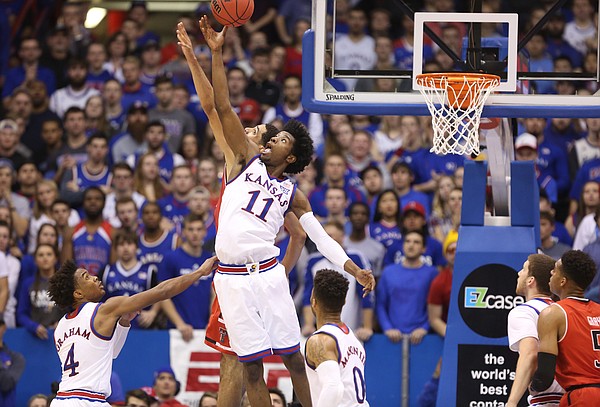 Kansas guard Josh Jackson (11) knocks a rebound away from Texas Tech forward Zach Smith during the second half, Saturday, Jan. 7, 2017 at Allen Fieldhouse. by Nick Krug

For a freshman who Kansas basketball coach Bill Self asks to do, well, just about everything, Josh Jackson never becomes overwhelmed with his job responsibilities.

The 6-foot-8 wing from Detroit flashed his abundant strengths at various points of the Jayhawks’ 85-68 win over Texas Tech Saturday night at Allen Fieldhouse, where he scored 17 points, secured a game-high 10 rebounds, blocked three shots, took away two steals, dished one assist, hit a 3-pointer and played a starring role in his team’s overall improved defensive intensity.

The future NBA lottery pick supplied the home crowd with his standard supply of savage highlight dunks, too, but it was another area on offense where his endless potential glowed. Half of Jackson’s rebounds came on Kansas misses, and when he attacked the glass and came away with the ball, the Red Raiders didn’t have much success in stopping him.

His five offensive rebounds directly led to eight of KU’s 23 second-chance points. Jackson shot 7-for-15 on the night, and in the first half when he badly missed a fadeaway jumper from the left elbow, he was the first to meet the ball on the right side of the backboard when it clanged off the rim.

The do-it-all freshman said Self has emphasized his need to take an active role on the offensive glass.

“Definitely another one of my jobs,” Jackson said, with a grin.

“Not really that long,” Jackson claimed. “Probably got about four or five key ones.”

So just realize there actually is no shortlist for Jackson, when it comes to where he needs to impact the game for the Jayhawks (14-1 overall, 3-0 Big 12).

If you ask Self where his latest one-and-done talent needs to make his mark most, he’ll refute Jackson’s claims, explaining the wing’s list of responsibilities actually is quite lengthy.

“You play hard, you defend, you rebound and you let the game come to you and you do what the game dictates,” Self said of his general demands for the star freshman. “But he should be a guy that I think should impact every area of the game — which he actually is doing a good job. He’s a good passer, he’s a good shot-blocker, he got his hands on balls for steals, he should be our best offensive rebounder — I think he got five tonight. I mean, there’s a lot of things that I think he did really well tonight.”

Jackson’s latest loaded stat output gave him his third double-double of the season, and, naturally, he said collecting rebounds is just part of his job.

“Everybody, every last guy, has a job that they’re supposed to do,” Jackson said. “Behind Landen I think I’m the guy who’s supposed to be down there bangin' and trying to grab a couple of rebounds and block shots, especially after, you know, losing Udoka (Azubuike to a season-ending wrist injury), who’s a pretty big piece of our team. We definitely all gotta step up in that category.”

As the number of games Jackson has left in a Kansas uniform diminishes, Self doesn’t mind asking him to expand his on-court obligations to the Jayhawks’ cause.

“But to me that should be the same thing every game,” Self added. “You may look at an opponent and say, ‘You know what, they’re gonna put a big guy on him, so this could be a team that he could drive more (against).’ Or ‘They may put a little guy on him, so this could maybe be a team that we could post him more,’ you know, things like that. But for the most part it doesn’t change game to game on what we expect him to do.”

Baseline View: Jayhawks turn it up late to beat Red Raiders by KUsports.com 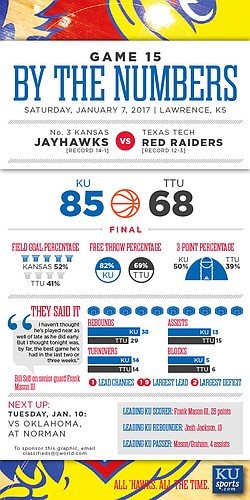 My favorite moment of the game was Josh's back-to-back blocks. I feel like we're so privileged to get to see him in a KU uniform, even if it's only for a year.

Just love the intensity with which he plays. He will need to work on his shot when he goes pro, but he will have all day every day to get it done. Pulling for this kid like no other.