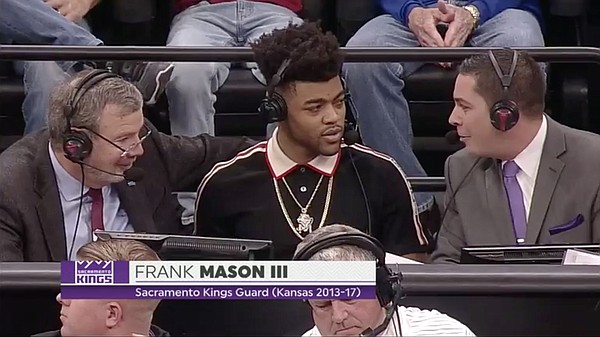 Some serendipitous timing, thanks to the schedule-makers for both the Kansas men’s basketball team and the NBA, allowed KU’s 2017 National Player of the Year and current Sacramento rookie Frank Mason III to take a courtside seat and watch the Jayhawks defeat Stanford Thursday night.

Seeing as how Mason knew the Jayhawks as well as anyone inside at the new Golden 1 Center not named Bill Self, the point guard slipped on a headset and joined the ESPN2 broadcast to discuss all things Kansas.

Although the Kings are his priority, Mason, averaging 8.6 points and 2.7 assists in 21.1 minutes this month, said he continues to follow the Jayhawks closely.

“I try to keep up with them as much as I can. I search Twitter, and if I can watch the game I definitely do that,” Mason said, before reiterating his Senior Night claim that he would’ve played more than four years for KU if possible. “But I’m always supporting my Jayhawks. I love them to death.”

ESPN’s Sam Farber and P.J. Carlesimo prompted Mason to explain what he misses about Lawrence and his time at Kansas.

“I miss absolutely everything. The amazing fans, my professors, coaches, teammates, the dormitory we live in — we called it a mansion,” Mason joked of McCarthy Hall. “It’s great, man. So I miss everything. And I miss the fans who come through Kansas. I miss playing in the fieldhouse — 16,300 fans every night, they bring unbelievable energy.”

For years to come, of course, Mason’s time with the Jayhawks will be associated with the program’s ongoing Big 12 title streak, currently at 13 years. He felt certain even though he won’t be contributing this season, as Self’s bunch attempts to break college basketball’s all-time conference title streak Kansas shares with UCLA, his former teammates know how much the run of excellence means to so many.

“Every player on the team don’t want to be a part of the team that ends that streak. So I think they’re all aware of that,” Mason said. “They worked really hard during the offseason and they take the responsibility to go out there and get a win every night.”

Asked about Oklahoma freshman phenom Trae Young and how the rest of the Big 12 stacks up this season, Mason wasn’t ready to assume the Jayhawks will make it 14 in a row with ease.

“I think that it’s definitely going to be a challenge. I think Trae is doing a great job over there at OU, and he’s doing more than scoring. He’s assisting the ball really well. They have a fantastic coach over there, too,” Mason added of Lon Kruger, “so I’m looking forward to Big 12 play. I think it’s going to be a really, really fun season.”

The former KU all-American hopes to get back to Allen Fieldhouse over the NBA’s All-Star break and said he is eying KU’s Feb. 17 home date with West Virginia. In the meantime, he’ll continue to enjoy watching his longtime backcourt running mate Devonte’ Graham take on a larger role as a senior.

“He’s running the show, I think he’s doing a fantastic job,” Mason began to say, before Graham dished one of his five first-half assists. “Look at that pass right there. What a pass by Devonte’ Graham.”

His air time couldn’t conclude without the ESPN crew asking Mason for his prediction on how the rest of the KU season will play out.

“That’s a rhetorical question,” Mason replied. “I think we’re going to win it all this year.”

That might have been the best part of watching Kansas-Stanford last night. Best of wishes to you, Frank! Good luck with the Kings!

so far i haven't seen the guard that drives like frank and takes the foul. svi is unpredictable, can drive and shoot the 3. he doesn't draw the body contact though. seems like you know devonte is going to either pass, lob or shoot the 3. easy to predict.

You're basically right about Svi, Henry, but you have to admit that he had a hell of a game last night. He was ice cold on his threes but he drove the ball to the hoop time and time again, and made several other excellent plays as well. I thought it was one of his best games of the year.

Believe me, Frank, when I say that the feeling is most DEFINITELY mutual. We would have LOVED for you to play more than four years.

What a wonderful interview. I actually got a little misty-eyed, thinking about how Frank is truly the epitome of what it means to be a student-athlete, and how much pride he has brought to Jayhawk Nation. And of course I also share his regret about what might have been if Udoka had been healthy. (I still can't believe we lost to the damn Ducks.)

I suspect we still would have found a way to lose that game, because we know how Bill Self is in Elite Eight games...

The Interview was awesome! My spine was tingling as Frank was speaking--so proud of you, Frank, and representing the Jayhawks like you did. This interview and the great sound bites Mason made, helped me forget the game that Dan D. did, talking about the "Not So Mean Tweets!" Ugh!!! Rock Chalk!

About the only chance we will have to see Frank perform is maybe the last game of mid week day on NBATV. The poor Kings record and West Coast location are overwhelmed by Warriors, Lakers and Clippers games to be televised, Its a damn shame for all of America that it will not see his game evolve in the NBA. With any luck he'll be traded to the Eastern Conference.

You can watch the Kings play on NBA League Pass. I have the online version and it costs me $30/month to watch every game that is on LP on any night. You can also sign up for a version where you only get the games of your favorite team. I think that costs like $10/month? Not sure, but you can go on nba.com and chack it out.