In his 27 games at Kansas, freshman Cheick Diallo never turned into the interior force most expected the highly-rated big man to become.

After a 13-point debut against Loyola (Md.) at Allen Fieldhouse, Diallo neither matched nor topped that total again, and only reached double-digit points on one other occasion — his third game, against Holy Cross (12).

Diallo only played more than 10 minutes five times all season, and outside of a 9-point, 9-rebound, 5-block effort against TCU never had a significant impact in a Big 12 game.

So why is it again that the 6-foot-9 19-year-old from Kayes, Mali, has entered the NBA Draft? It’s all about potential. And it only takes the decision-makers with one franchise to look at Diallo and see an improved, evolved version of what he is now for him to hear his name called in the first round of the draft on June 23. 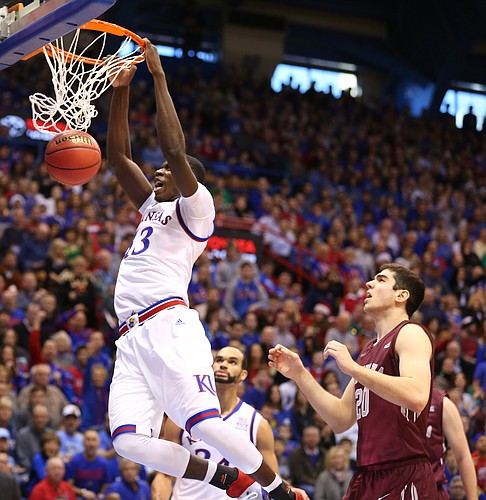 Kansas forward Cheick Diallo (13) delivers a dunk during the first half, Saturday, Dec. 19, 2015 at Allen Fieldhouse. by Nick Krug

Bill Self expects Diallo will intrigue enough scouts, general managers and coaches for the big man to hire an agent and stay in the draft — something he hasn’t done yet. Diallo might receive the feedback to bring on that decision next week, when he, Perry Ellis, Wayne Selden Jr., and 60 other prospects report to Chicago for the NBA Combine.

The weeks ahead — and Diallo’s ability to prove himself worthy of a team’s investment — will determine if he receives a guaranteed contract in the first round or really has to prove himself as a second-round draft choice.

At this moment, the likable youngster is straddling the border of the first and second rounds, according to most mock drafts.

DraftExpress.com, one of the few sites that projects both rounds, has Diallo falling to No. 33 (the third pick of Round 2), to the Los Angeles Clippers.

There are other sites that project Diallo as a late first-rounder: 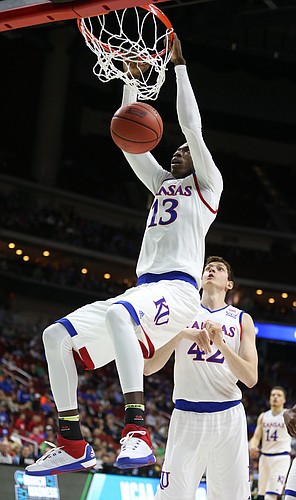 Kansas forward Cheick Diallo (13) brings down a dunk during the second half, Thursday, March 17, 2016 at Wells Fargo Arena in Des Moines, Iowa. by Nick Krug

However, there are also a few first-round-only mocks out there that don’t include Diallo’s name.

Anyone who watched Diallo play for Kansas understands his limitations at this point, and it might be difficult to overlook those when thinking about how he fits in with an NBA team. Just remember that no general manager in his right mind would add Diallo to his roster and expect him to play meaningful minutes in the 2016-17 season.

Whichever organization picks up Diallo, it will do so as a longterm investment, and then utilize its developmental resources — think countless hours of drills with assistant coaches and trips to the D-League — in the hopes of turning him into a valuable post presence a few seasons from now.

Believe it or not, Diallo does have attributes that make him a potentially valuable commodity. DraftExpress does a great job of highlighting his strengths in the video below.

What is there to like about Diallo as an athlete? Plenty, according to Draft Express.

- He’s mobile for his size and a “tremendous” rim-runner.

- Diallo plays hard, which shows up when he goes to set screens and dives to the rim off those actions.

The young big certainly has his flaws on defense, but those are fixable with coaching and hard work.

- Diallo has good instincts and mobility.

- 6-9 might not be an ideal height for a potential center, but he is quick off the floor.

- He is athletic enough to step out and move well on the perimeter, and he’s also comfortable getting low and sliding his feet outside.

At this stage of his basketball career, Diallo’s energy and work ethic might be his most valuable characteristics.

- He plays hard on both ends of the floor.

- Diallo can rebound out of his area, meaning he will chase down long rebounds when they take unexpected bounces away from the paint.

- When taking an active approach, he keeps the ball alive on the offensive glass and comes up with tap-outs to extend possessions.

- Can be physical, despite his slender frame.

- Diallo wasn’t a headache for the KU staff when Self kept him in limited role.

Because DraftExpress does such a great job with its prospect analysis, the site also provides a scouting video of Diallo’s weaknesses, viewable below.

Again, KU fans are plenty aware that Diallo isn’t exactly Joel Embiid with the ball in his hands.

- For the NBA, he is probably undersized to play center.

- Frankly, Diallo doesn’t score well on post-ups, partly because his touch around the rim isn’t great.

Once Diallo gets to the NBA, his effort will only get him so far.

- He gives up position too easily inside.

- Despite his speed in the open floor, he lacks the “elite bounce” that would help him make up for his lack of size in the paint.

- Young Diallo will get knocked around inside at the next level.

Mistakes on defense probably cost Diallo minutes at KU more than anything else.

- Diallo reaches too much on the perimeter.

- He tries for blocks that he won’t be able to get, putting him and his teammates in bad spots.

- As DraftExpress bluntly puts it, Diallo is “A long way from being able to help an NBA team”

We’ll continue to track the stock of Diallo, Perry Ellis, Wayne Selden Jr. and Brannen Greene in the weeks leading up to the 2016 NBA Draft here at KUsports.com.

A pro team has 15 players and only 13 active for games. So some teams use those 2 extra players to develop for future years. If a team sees potential they will select and give him time to develop. I predict Diallo will get drafted and hopefully develop for future years. Talk about those 2 inactive players Sasha Kaun is making a million dollars from the Cleveland team. He has been in very few games.