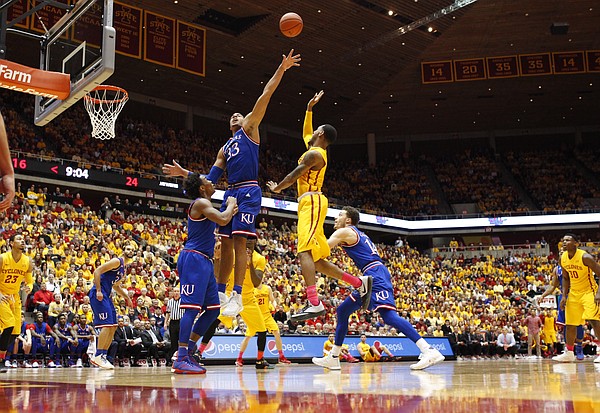 There aren’t many college basketball players that can say they have won four of the past five times they have faced Kansas. In fact, the only ones who can say that about a Bill Self-coached KU team are Iowa State’s current crop of veterans.

With a pair of Big 12 Tournament victories and two more wins coming at Hilton Coliseum, the Cyclones have proven they have the fire power to not only hang with the Jayhawks, but knock them off. Winning at Allen Fieldhouse Saturday afternoon — on Perry Ellis’ Senior Day? That would be a next-level accomplishment. Iowa State has lost its last 10 trips to Lawrence.

When the 2015-16 schedule came out, this KU-ISU matchup seemed like one that could decide the Big 12 championship. However, KU already wrapped up its 12th straight title and ISU has experienced more drop-off than expected following the departure of former coach Fred Hoiberg.

And there is the less obvious incentive of ISU trying to become the first Big 12 team to beat a Self-coached KU team both at home and on the road in the same season. While that’s probably not something floating around in the minds of Georges Niang and Monté Morris, just getting a win at Allen Fieldhouse is motivation enough.

ISU (82.2 points per game this season, 1st in Big 12) has led the league in scoring each of the last three years. If the Cyclones can do that again they would join Kansas (2000-03) as the only teams to lead the Big 12 four consecutive seasons.

Some other interesting Iowa State offensive numbers to consider:

Defense has been ISU’s issue all season, particularly with the absence of injured Naz Long. The Cyclones are 3-8 when their opponent gets 80 or more points. They also rank last in Big 12 games in points allowed (76.9) and 6th in FG% defense (44.2%). KU leads the conference, holding Big 12 foes to 38.7% shooting.

Iowa State certainly will extend its run of NCAA Tournament appearances to five straight years, improving on its current program record. But the Cyclones’ defensive issues might be too much to overcome against a hot Kansas team that can match them basket for basket.

With all of those factors in mind, here are the Cyclones the Jayhawks have to worry about as they try to close out the regular season with an 11th straight win. 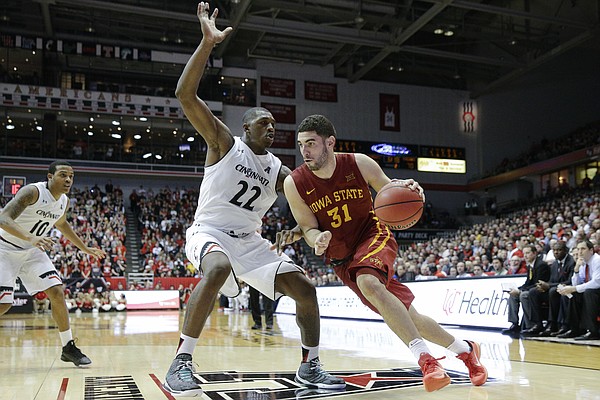 Iowa State’s Georges Niang (31) drives against Cincinnati’s Coreontae DeBerry (22) during the Cyclones’ 81-79 victory over the Bearcats Tuesday, Dec. 22 in Cincinnati. Niang and the Cyclones are among the challengers to Kansas’ streak of 11-straight Big 12 regular season titles. by Associated Press 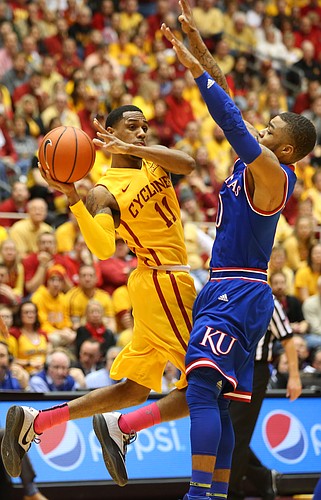 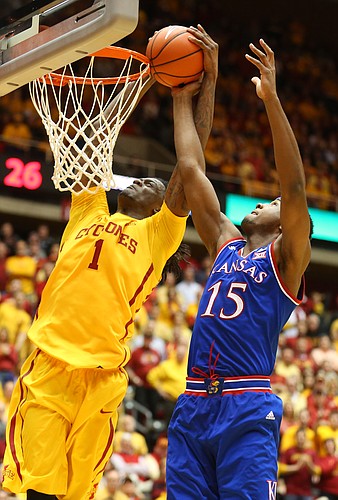 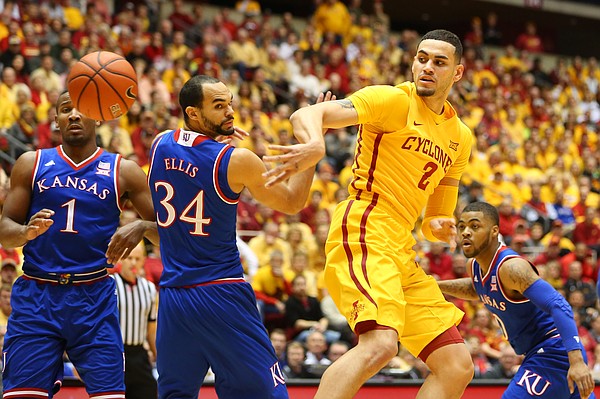 Matt Thomas drilled two treys tonight to give him 76 on the season, tying for 10th on ISU's season list. #Cyclones pic.twitter.com/IGvjZ1i4gS

Very impressive how Kansas has turned things around. It's hard to improve upon that effort, but if we maintain that level of energy and focus I think we are the toughest out in college basketball. There is actually still room to improve (speaking to YOU, Wayne Selden, Carlton Bragg, Brannen Greene and Cheick Diallo). Thankful for the progress, and I believe it owes to Coach Self. It would be nice to win at home on Saturday night to have a neat and tidy conclusion to the regular season.

We always want to win the Seniors night game. Just remember how badly our Jayhawks whipped the Longhorns on their Senior night. We have been playing great and hope for another great performance. It won't be easy.

I think defense is going to be a big factor in this game. Deny them good shots from the 3 will force them to jack up bad shots. Slow them down and smother them with defense. This KU team is capable of that.

The last game against them should be plenty of motivation.

Georgie Porgy. One dude I won't miss. I've watched him play against other Big 12 teams and it looks like he goes half-speed a lot of the time. Not when he plays us. He sees Jayhawk and his eyes light up and that dude is a match up nightmare. Old school. Kind of similar to Perry's game these days now that Perry has added the 3 ball. Come one guys. This one is for pride. Don't let these farm animals pee on our court on Senior Day. You can bet one thing, they will bring it today and it will be our defense, or not, that will decide the outcome.

The mayor is prolly in selfs office. A true middle finger to the most idiotic, whiny fanbase in the league!