Now that the 2016 Big 12 football season is complete, all the numbers have been totaled and averaged and sorted nicely for consumption, and postseason honors are starting to get handed out.

So it’s a good time to review the league’s individual statistical leaders and see where Kansas football players landed among their peers.

As one might guess, the Jayhawks, who used three different starting quarterbacks, didn’t show up with this year’s passing leaders.

Perhaps head coach David Beaty will find a QB he can count on throughout 2017.

Still, KU had plenty of individuals stand out over the past few months, despite a 2-10 overall record and 1-8 mark in the Big 12.

What follows is a review of the categories in which Jayhawks ranked among the conference’s best, with a look at the numbers produced by the league-leader for context.

How did the Jayhawks stack up? Some of them finished higher than you might have guessed. 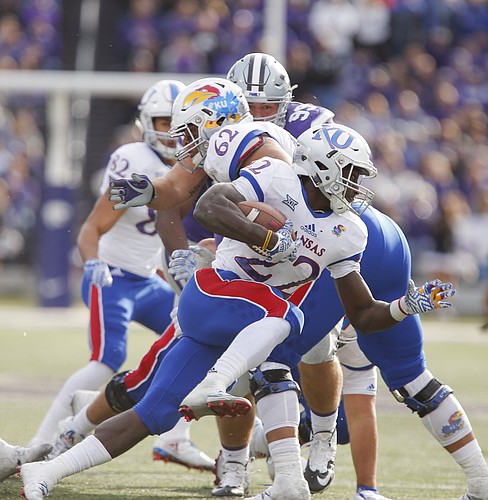 The senior running back often shared rushing duties with teammates, but Kinner averaged 5.3 yards per carry and scored three touchdowns for Kansas in 2016. He looked even stronger late in the season, when he produced a season-best 152 yards on the ground against Iowa State. 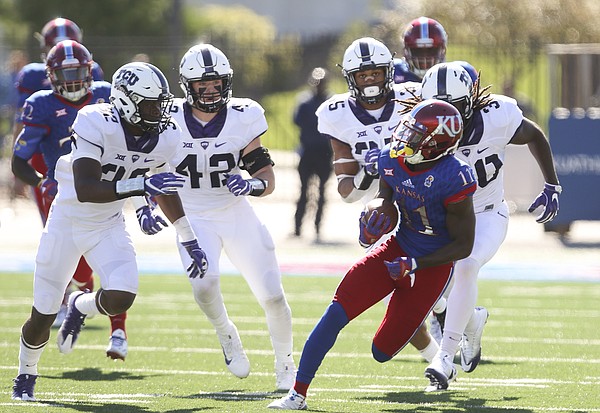 Kansas wide receiver Steven Sims Jr. (11) tears down the field as he is trailed by the TCU defense after a catch during the first quarter on Saturday, Oct. 8, 2016 at Memorial Stadium. by Nick Krug

Sims emerged as the top target for Kansas quarterbacks this season, but Gonzalez was as solid a second option as the offense could hope for during another rebuilding season.

Sims scored seven touchdowns, with a long of 74 yards. And while a No. 4 ranking in this category is impressive, Sims fared even better within the conference. Looking only at league games, Sims led the Big 12 with 6.8 catches an outing. Even OU star Dede Westbrook only caught 6.3 a week against league foes.

On the season, Gonzalez tied for 9th with Oklahoma State’s James Washington (5.2 catches). Gonzalez reached the end zone three times as a junior, including a 95-yard score in the finale at K-State, thanks to a deep ball from redshirt freshman quarterback Carter Stanley.

During his breakout year, Sims, a 5-foot-10 receiver, hauled in 72 catches, averaging 11.9 yards a reception. 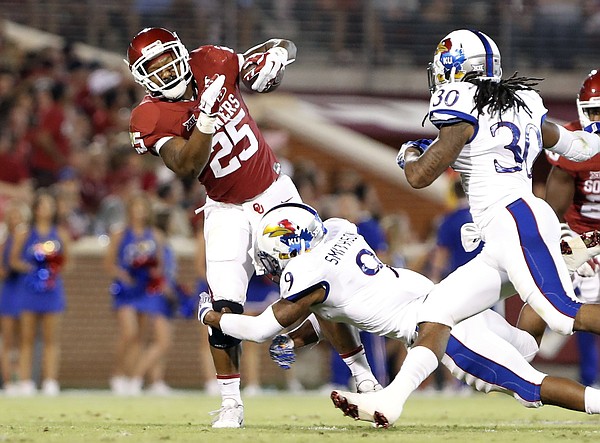 Oklahoma running back Joe Mixon (25) is tackled by Kansas safety Fish Smithson (9) during the first half of an NCAA college football game in Norman, Okla., Saturday, Oct.29, 2016. by Alonzo Adams/The Associated Press

As he did in 2015, Smithson led Kansas in tackles. The senior safety made 93 total stops. As the season progressed, Smithson's young apprentice in the secondary, true freshman Lee, developed into a presence, as well. After graduating high school early to join Kansas this season, Lee made 69 solo tackles (76 total) in 11 appearances and eight starts.

Both Armstrong, on the D-line, and Shaw, in the secondary, made 40 solo tackles apiece and 56 total. 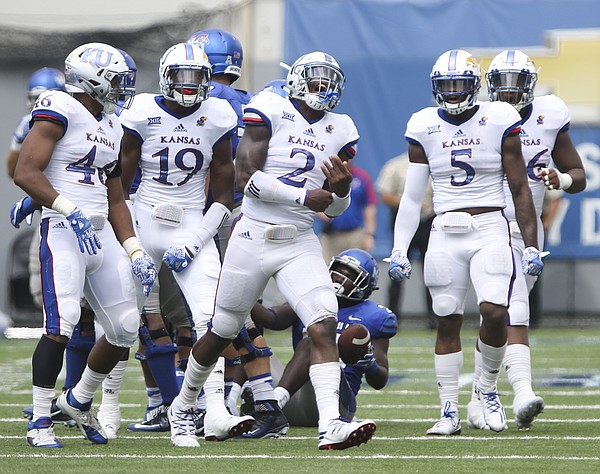 Kansas defensive end Dorance Armstrong Jr. (2) celebrates after a tackle for a loss during the second quarter on Saturday, Sept. 17, 2016 at Liberty Bowl Memorial Stadium in Memphis, Tenn. by Nick Krug

With 10 quarterback takedowns behind the line of scrimmage, Armstrong produced all one-man sack attacks, without an assist, during his outstanding sophomore campaign.

Rosser, a senior who played a hybrid linebacker/end position, made all four of his sacks during a two-week span in the first couple of Big 12 games. Rosser made one at Texas Tech and three versus TCU.

Simply put, Armstrong was the Big 12’s best at creating chaos in the backfield. With 20 solo tackles for loss as a sophomore, Armstrong beat K-State’s Willis in this category by 3.5.

Although Wise didn’t have the numbers to match Armstrong, the defensive tackle had as much to do with the Jayhawks’ success on the defensive line as anyone. Wise made 9.0 stops behind the line, all solos, when he wasn’t disrupting offenses in other ways. 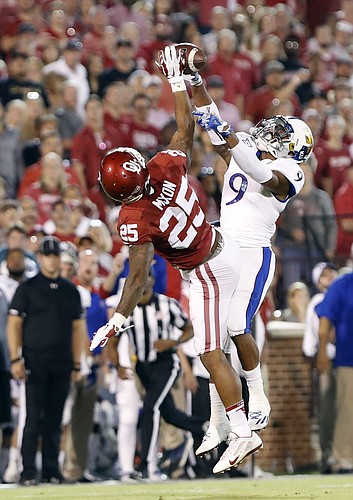 Oklahoma running back Joe Mixon (25) works to make a catch as Kansas safety Fish Smithson (9) defends during the first half of an NCAA college football game in Norman, Okla., Saturday, Oct.29, 2016. by Alonzo Adams/The Associated Press

Not only did Smithson finish plays with tackles, the senior safety found his way to the ball when quarterbacks passed in his direction. While captaining the KU defense, Smithson broke up seven throws and came away with interceptions on four other occasions.

At corner, Ogletree, another senior, didn’t pick off any passes, but he broke up eight while defending the Big 12’s many talented receivers.

Averaging a pick every three games in 2016, Smithson took away four as a senior. But he actually vastly improved his average in November, with an interception apiece against Iowa State and Texas.

Stewart wasn’t far behind Smithson with three passing takeaways of his own during his senior season. Few of KU’s 10 picks on the year were as critical as Stewart’s 55-yard INT return for a touchdown during the Jayhawks’ upset victory over Texas. 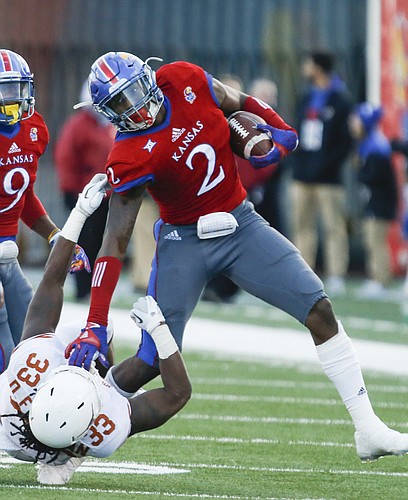 Armstrong’s three forced fumbles on the season tied him with K-State’s Willis and Reggie Walker, Baylor’s Patrick Levels and Texas Tech’s Jah’Shawn Johnson for the top spot in the category.

The other most active defender on the KU roster, Smithson knocked the ball out of an opponent’s grasp twice this season.

Twice this season, Armstrong, the Jayhawks’ most disruptive defender, found his way to a loose ball to recover it for Kansas. So did the man lining up on the other edge of the D-line, senior end Mosby. 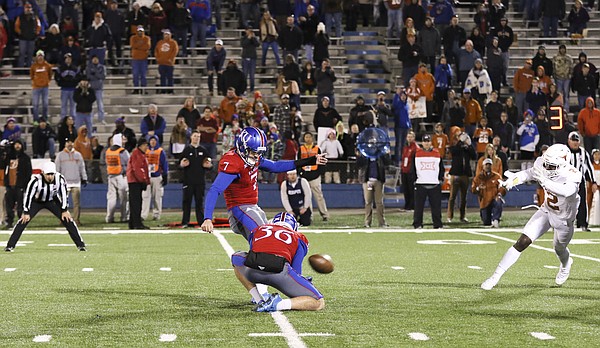 Nearly all of the fans are on their feet for Kansas place kicker Matthew Wyman's game-winning field goal during overtime on Saturday, Nov. 19, 2016 at Memorial Stadium. by Nick Krug

West Virginia’s Mike Molina and Texas kicker Trent Dominigue both missed seven field goals on the season — more than Wyman’s six — but, like most of the conference’s kickers, benefited from their teams reaching the end zone for far more extra-point opportunities than Kansas. Five of the league’s kickers, including top scorer Ben Grogan of Oklahoma State (55-for-56), got to kick at least 49 PATs. Wyman only had a crack at 26 kicks following a TD. 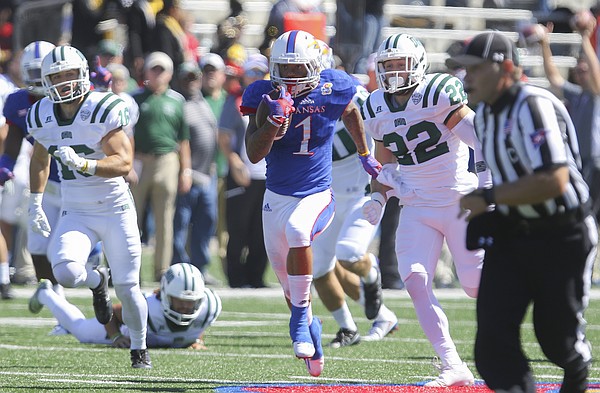 Kansas wide receiver LaQuvionte Gonzalez (1) runs back a kickoff for a touchdown during the second quarter on Saturday, Sept. 10, 2016 at Memorial Stadium. by Nick Krug

Gonzalez proved a better kick returner than punt returner for Kansas. On 28 occasions during his junior season, the speedy receiver fielded a kickoff and decided to go and attempt to make something happen. Gonzalez totaled 601 return yards, and housed a 99-yarder against Ohio in Week 2.

With his kick return yardage added to his 729 receiving yards, Gonzalez’s numbers ranked among the Big 12’s best, even though he finished the season with negative totals in punt returns (-10) and rushing (-9). 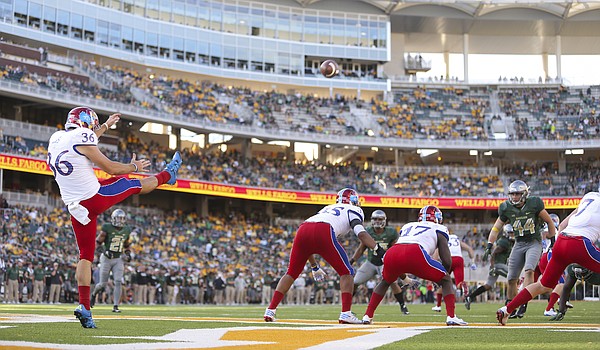 Kansas' Cole Moos (36) punts from the Jayhawks' end zone late in the fourth quarter on Saturday, Oct. 15, 2016 at McLane Stadium in Waco, Texas. by Nick Krug

For KU junior punter Moos, 14 of his kicks traveled 50-plus yards, including the longest in the Big 12 this season, an 82-yarder at Baylor. 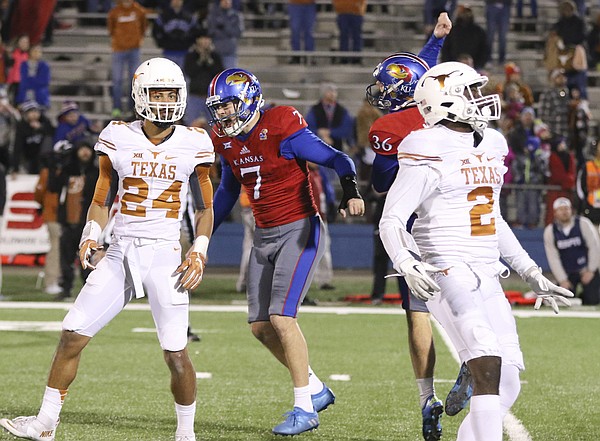 Wyman tied for 6th with Texas Tech’s Clayton Hatfield in field goals per outing. The Kansas senior made a season-high three versus Texas at Memorial Stadium, including the game-winner in overtime.

Beaty sent Wyman out for 19 field-goal tries this year, and his kicker nailed 13 of them, including a season-best 50-yarder versus TCU.

When Kansas reached the end zone and called upon Wyman’s services, the trusted kicker never missed. Wyman went 26-for-26 on PAT’s.

Lots to digest there, and some hope for the future with our top-two wideouts returning, and four of our five best defensive players returning (Armstrong, Wise, Dineen and Lee). I will really miss Keaun's tough running and I'm afraid we'll be taking a big step backwards at the RB position.

Interesting to see Snyder's impact as a coach. He has a bunch of guys on these lists, and most were not top recruits. Part of it is getting guys to the right place at the right time, and Snyder is a genius at coaching-up his players. KSU will be a handful next year. If it's Snyder's last year there, I can't think of a better way for him to end his career than with an upset loss to us in Lawrence.

Not only is that Snyder's impact as a coach but he has one of the best S&C programs in the Big 12 lead by, none other than Chris Dawson. You will remember that Dawson was our S&C from 03-09 and was integral in designing the weight room when the new complex was built adjacent to Memorial Stadium. KSU consistently takes under recruited or lower star recruits and consistently builds them up. Snyder and his KSU program are the blueprint for how you build a program and make the most out of a little.