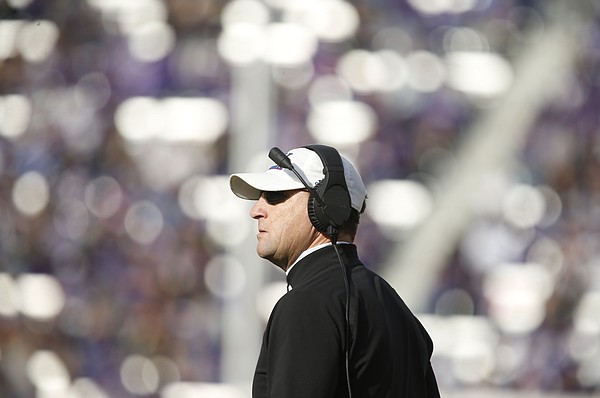 Only someone as positive as Beaty could come away from the 2015 campaign feeling optimistic, and, of course, he did.

So it came as no surprise this past weekend, upon the conclusion of Year 2 for Beaty, the man running the program sounded even more fired up entering the offseason. Asked to assess his second year compared to his first, Beaty didn’t reference the Jayhawks’ 2-10 overall record or 1-8 mark in the Big 12.

“One of the best things that we’ve done is I think we’ve developed the guys that we have in our program,” Beaty offered. “There’s two ways I think you get better: you recruit and you develop the one’s you’ve got. ’Cause you’re not gonna get any more — they’re not gonna give you any more. You have what you’ve got and then you get to go get 25 (in recruiting), is what you get to get.”

The progress Beaty alluded to showed up in 2016 thanks to freshmen and sophomores making significant on-field contributions. 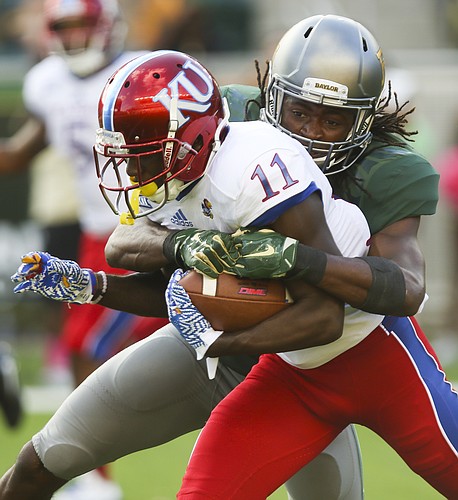 Kansas wide receiver Steven Sims Jr. (11) is brought down by Baylor safety Davion Hall (2) during the third quarter on Saturday, Oct. 15, 2016 at McLane Stadium in Waco, Texas. by Nick Krug

A year ago, receiver Steven Sims Jr. caught 30 balls for 349 yards and two touchdowns as a freshman. His production leapt to 72 receptions, 859 yards and seven touchdowns — all team-highs — as a sophomore.

A true freshman who graduated a year early to join KU football ahead of schedule, safety Mike Lee tied senior safety Fish Smithson for the team lead with 70 solo tackles. Lee’s 77 total tackles trailed only Smithson (93) and he didn’t become a starter until October.

Defensive end Dorance Armstrong Jr., while expected to play a key role for Clint Bowen’s defense, turned into one of the Big 12’s most disruptive forces. Armstrong likely will finish the year as the league’s top tackler for loss. His 20 stops behind the line of scrimmage lead Kansas State defensive end Jordan Willis’ 15 — though the Wildcats’ end still has a Saturday date at TCU to try and catch up. Plus, Armstrong finished his second season with 10.0 sacks, currently second in the Big 12 to Willis’ 10.5.

Mostly playing as a replacement starter for Marcquis Roberts, who missed five games, sophomore linebacker Keith Loneker Jr., in his first season of FBS football, finished sixth among KU defenders in tackles, with 43, while also breaking up four passes.

Second-year defensive tackle Daniel Wise, who looked the part of a future impact interior lineman as a freshman, fulfilled that promise. Wise came through with 10 tackles for loss and 38 total stops playing a spot where it’s difficult to produce many statistics.

Redshirt freshman Carter Stanley took over starting quarterback duties with three games left and Kansas experienced the best stretch of its season to close it. In his three starts, Stanley completed 71 of 124 passes (57.3 percent) for 693 yards, with three touchdowns and four interceptions.

“And the thing that I’m very proud of our strength staff, our coaches, is they develop those guys,” Beaty said of the program’s youngest talents. “They’re a little bit bigger, a little bit stronger, a little bit faster. … They’re all very young, which they’re gettin' something we can’t give ’em, which is experience. Unfortunately sometimes it comes with growin’ pains when you’ve got a bunch of ’em out there at once. Maybe sometimes not so much when you’ve got one or two of ’em, but if you’ve got a bunch of ’em out there, there’s some growin' pains that come along with that.”

The hope for Kansas is less of those aches will show up in 2017, with Armstrong, Sims, Lee, Wise, Stanley and Loneker returning, with running backs Khalil Herbert and Taylor Martin, and offensive linemen Hakeem Adeniji, Mesa Ribordy and Larry Hughes among the promising underclassmen.

“But, man, I think the thing that I’m most impressed with is the way that we’re developing ’em,” Beaty said. “I think if we can continue to do that we’ll have a chance to be a very competitive ball club here in the future.”

I tip my hat to the team and coaches on a job well done. I know we didn't have as many wins as we all want, but, brother, I feel like we have hope for the future. Keep sawing wood gentlemen. Can't wait until next year.

That's correct. The moral of this story is don't try to write a football blog while covering a volleyball match. Thanks!

The starting OL also has a freshman and redshirt freshman. Obviously OL wasn't a strength, but there was a significant improvement midway through the year when the OT's switched sides. I don't really recall hearing about DE's feasting on our starting true freshman walk-on L-OT. It will be great to see them get more experience.

Apparently there are a couple of talented kids from Louisiana coming in this weekend. One is a 4-star OL. The other is committed to WVU but is making a visit. Both sound like they'd be fantastic additions.

Also, Corione Harris (of Landry-Walker High School, Class of 2018 and a highly ranked DB) is interested in Kansas Jayhawks now (as well).

Like I've said in the past, I hated losing RB Coach Reggie Mitchell to Arkansas. But, Coach Beaty has hit a Home Run in hiring RB Coach Tony Hull (in Coach Mitchell's place).

And, Coach Hull has truly opened up a new recruiting territory for the Jayhawk's Football program.

4-6 wins next year depending on QB play next year.

When was the last time a KU team displayed notable progress over the course of one season and from one season to the next?