If the NBA Draft happened today, odds are four-year Kansas forward Perry Ellis would last deep into the second round — or perhaps not be selected at all.

As reliable a scorer as the Big 12 has seen the past handful of years, Ellis, according to sports-reference.com, ranks No. 1 in the conference since 2009-10 in career offensive rating (120.30), even beating out Naismith Award winner Buddy Hield of Oklahoma (115.39).

Yet, when you look at projections for the 2016 NBA Draft, such as the current mock at DraftExpress.com, Hield’s name appears in the lottery and Ellis’ doesn’t show up until near the end of the second round. DraftExpress lists Ellis 59th, the next-to-last pick in the entire draft. NBADraft.net’s predictions have Ellis going 56th.

Kansas Jayhawks forward Perry Ellis (34) gets to the bucket against Maryland forward Damonte Dodd (35) during the first half, Thursday, March 24, 2016 at KFC Yum! Center in Louisville, Kentucky. by Nick Krug

Now, there is no denying that Hield and other projected lottery picks look like more sure fits in the NBA than Ellis. But could there possibly be 50-plus prospects in this draft better than him?

The good news for the soft-spoken, hard-working forward from KU is the draft isn’t until the end of June. Ellis will have plenty of opportunities in the weeks ahead to work out for various franchises, in front of coaches and decision-makers, and show them exactly what type of player and person he can be for their organization.

At 6-foot-8, one perceived knock on Ellis is that he’s a tweener — not big enough to play power forward, but not exactly a small forward, either. However, Ellis might be entering the NBA at the exact right time for that not to matter. More and more teams are showing their preferences for playing smaller lineups, putting a stretch-4 at power forward, someone who can hit outside shots and provide better offensive spacing. 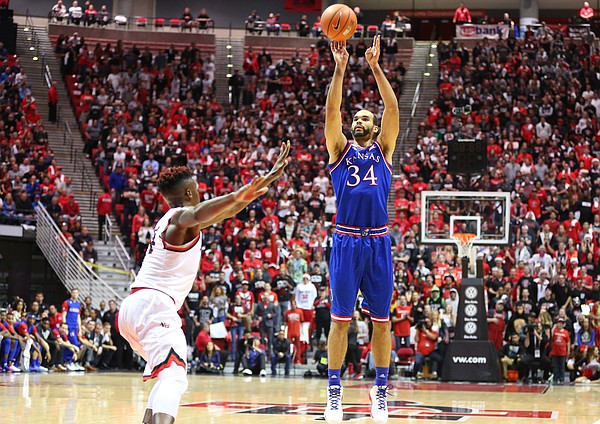 Kansas forward Perry Ellis (34) puts up a three against San Diego State forward Zylan Cheatham (14) during the first half, Tuesday, Dec. 22, 2015 at Viejas Arena in San Diego. by Nick Krug

There isn’t an NBA coach or general manager who would look at Ellis and say, “There’s our new starting 4-man.” But there are so many teams in need of production off the bench, it’s hard to imagine that many organizations passing up on Ellis, who can smoothly knock down jumpers (Bill Self just didn’t often need him to or ask him to), or use his quickness facing up to get inside for a high-percentage attempt.

Maybe the draft will play out that way the current predictions indicate, and Ellis will hear the names of 50-some players called before his. Or maybe the right organization will see Ellis’ potential to contribute off the bench and decide to take a proven basketball commodity over a gamble with intriguing measurements.

Either way, we’ll continue to track the draft stock of Ellis and other Jayhawks in the weeks ahead, here at KUsports.com.

Benson. Joe Ross adamantly insists that you're wrong. Perry Ellis and Harrison Barnes are identical players. They have the same skill set, have always played the same position and have the same NBA potential. Ellis is the prototype NBA small forward. Joe says so.

Don't you realize that you and all the NBA scouts and draft gurus are wrong and Joe Ross is right!!!

Why are you so weird?

Is Joe Ross not deserving of his opinion? Is there anyone you don't hate?

Sorry Benton. It's Benton. Not Benson. It comes out better without auto correct.

Jay, you look like a fool. Stop beating this long dead horse. It's really hard to watch you hang yourself so blatantly.

Thanks for your concern. Joe was ranting about exactly this just hours before the article was posted. I'm candidly quite happy to get a little muddy with this one after the endless infantile insults and mocking from Joe on what could have been easily replaced with "oops, my bad, Barnes and Ellis have almost no similarity".

He's been comically absent on an article that basically calls his notion idiotic.

A question Glen. If this discussion concerns you so, where have you been to cast your opinion? Do you side with Joe that Benton and all the basketball world are wrong, and Joe is right? Perhaps your concern is misdirected?

I've seen you do this multiple times, so it's clearly not your reading comprehension that's at issue. You know very well that Glen wasn't posting about the point of discussion, but rather your idiotic, pre-school behavior.

You want to have taunting and name calling arguments on this board, and when you don't have cause, you incessantly resurrect old threads in the hopes of restarting one.

I'm not a frequent poster here, so I certainly won't be missed, but your constant jackassery has made this forum an unreadable annoyance. I'll just mosey on over to someplace you aren't.

I'm so glad that you're opposed to " idiotic, pre-school behavior." and "taunting and name calling arguments on this board." and "jackassery" that you'll be leaving....

I couldn't agree with you more!

You'd hate to stay and have to read your own comments.

When you couple in a player's skill set with work and personal ethics, it's hard to believe every NBA team will pass on Perry Ellis two full rounds. If a guy like Ellis can not stick in the league, it doesn't say much for the NBA.

The NBA is like all pro sports. It's the ultimate free market. If Ellis can help a team win, he'll stick. If he cant, that's not the league's fault.

It's an idiotic comparison.

If Perry doesn't get drafted it will, indeed, be the league's fault. Just as it was with Chris Harris in the NFL. Any goof who comes on here posting that these pro sports scouts and managers are "experts" is a complete imbecile. In fact they get it wrong more than they get it right. In fact, I could have built a better team than the 76ers have now. Actually, that Octopus in Germany, before he died, could have picked a better team. In fact, half the teams have losing records which prove that their mangers and coaches are bad at their jobs.

Benson gets it right. The league is moving towards Perry. He'll get drafted, he'll make the team and he'll have a solid career.

2) the NBA is about winning. Teams would hire anyone that helps them win. In that sense it's the ultimate free market. Intelligent people realize this

3) if there were any chance you knew anything about basketball the Sixers would hire you. Have you applied?

4) Ellis may or not be drafted. Many star players in all pro sports were undrafted. Either way he will be at a camp, if he wants to be. If he can't stick in the league, it's because he can't help a team.

6) if the coaches, scouts and GMs in the top league in the world are all idiots, where are the experts?

7) by definition, half the teams in every league have losing records... Are half of all sports executives everywhere idiots?

8) I sincerely hope that you develop enough self control to stop humiliating yourself this way.

I agree with you about some of the free market aspects. However, Jay's point about performance is spot on. If a team thinks Ellis is the guy that can help them win, Ellis will be the guy. Pro sports teams are brutal in that aspects. They will go through people until they find a winning combination. Some teams never find that winning combo and hence are lousy franchises going through complete roster turnovers every few years.

Let's hope Ellis is capable of a major re-invention of his game.

If not, neither Keith Langford nor Wayne Simien are suffering without the NBA in their lives. Ellis will find ways to lead a satisfying life as well.

The NBA like most other sports leagues is a Cartel and not a "free market" there are multiple barriers to entry.

There are the same barriers for players that every job has. Ability. None further.

Unless you want to work for a government agency. Then race, gender etc often become factors.

I'm pretty sure Ellis is more interested in PLAYING in the NBA as an EMPLOYEE than OWNING an NBA or any other pro sports franchise.....

Maybe if he has a billion dollars some day he'll be barred from ownership as Balsillie and Cuban have been by NHL and MLB.

From a labor perspective--still not a free market

How so? Every human on earth can declare for the draft. From there, ability rules. Sorry Rae.

Did you even read the article you posted? It wasn't vaguely relevant. You just read the title, didn't you?

Accessibility and what you are trying to call "Free Markets" are not the same thing. Yes anyone can enter the NBA draft but it does not make it a "Free Market" my any stretch of the imagination.

Rae. For players, it's the ultimate free market. Ability rules. No racial quotas, no social constraints. Any player from anywhere can play, if they're good enough. NBA scouts scour the earth to find talent. That's what a free market is.

You didn't read your own article, did you?

BTW geniuses, the writers name is Benton not Benson.

Prediction: He'll get picked up by the Spurs in the second round, because the Spurs are smarter than everyone else.

The Spurs are the type of team that can more effectively isolate a player's talent and mitigate his shortcoming by placing him in a role he's well suited for. I always hope Jayhawks become Spurs.

That's not a very ringing endorsement of the talent of KU players. Are you a fan?

Playing on the winningest team in recent NBA history is bad? How?

Benton, is Ellis the highest rated of any of the Jayhawks entering the draft? Where do Diallo, Selden, and Greene rank? Do Mickelsen and Traylor show up at all?

Diallo is the highest, followed by Selden, then Ellis. The other 3 do not show up in any mock drafts.